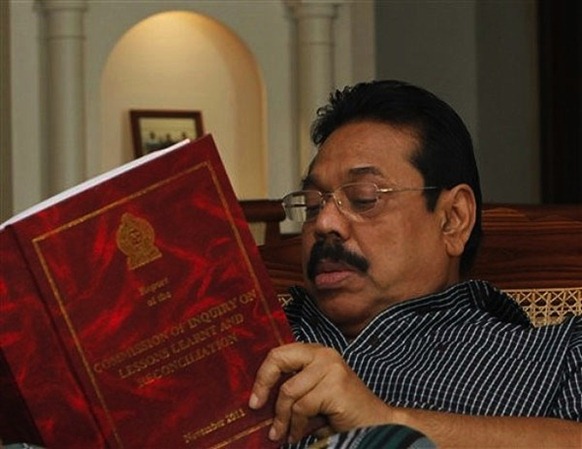 Against the backdrop of grave planetary changes, Sarath Fonseka’s release, G.L. Peiris’s visit to Washington DC and the third anniversary of the defeat of the LTTE, an evaluation of the requirements of reconciliation are in order.  There is a need to distinguish between the symbolic and the substantive – both in turn playing their part in the journey beyond conflict.

The consequences of Sarath Fonseka’s release are yet to be registered, as are the causes for it to be ascertained.  Speculation abounds about it as the grand symbolic act of reconciliation, which will distract attention from the lack of or tardiness in the implementation of the more substantive measures that need to be undertaken.  There are those who maintain that it is a great meritorious act, which will vitiate malefic planetary effects, others cite Fonseka’s health and there are the more prosaic and “unpatriotic” explanations of international pressure.  Finally there is the explanation that it is a savvy political act aimed at sowing greater discord amongst the opposition. A Machiavellian twist to this is the regime’s expectation that Fonseka as the cat amongst the pigeons in the opposition will in the end consume himself- his incarceration not having turned him into a Mandela.

Sarath Fonseka may in the short term at least galvanize, with varying degrees of success, that section of the polity for whom he is a hero and martyr and those generally despairing of the Rajapaksa’s and the available opposition leadership.  As to whether his release will have an appreciable bearing on the substantive requirements of reconciliation is by no means certain.  That substantive progress on this front is a national priority, nevertheless, is surely beyond dispute.

Taking the LLRC report and the UNHRC resolution as the reference points, it is important that the key areas for action are identified and benchmarks for progress defined to measure demonstrable progress.  This requires a national conversation amongst those who have read the Report and who are both willing and able to contribute towards framing the process of reconciliation.  It also very importantly, requires the availability of the report in its entirety in the two official languages of the land.  There should be a copy of it in every public library in the country. No one should be denied access to it and to informed participation in the countrywide debate it has aroused.   That this has yet to be done, some five months after the report was made public, is a disgrace. Surely, so sovereignty conscious a government as the one we have, can get its act together to translate the LLRC report?  The latter is an indicator of the regime’s understanding of and commitment to the process of reconciliation and democratic governance.

In a similar vein, if there is an action plan or if there is to be one, it must be shared with the peoples of this country as the US secretary of State, apparently one of the privileged few who are privy to even a draft, has communicated to the foreign minister.

The issue of a political settlement of the ethnic conflict is a priority substantive issue.  It has been deadlocked for quite some time and while there are media reports about imminent movement on this front, the simple fact is that deadlock is attributable to the persistence of perspectives and positions integral to the conflict, rather than its resolution.  The arguments about Thirteenth Amendment Plus or Minus and when or whether the select committee should commence its deliberations need no rehearsing here.  What is impeding movement is the ideology of the regime and its perceived political exigencies, which are responsible for the belief that the defeat of the LTTE is the end of the story and that even now, India and the international community can be strung along with repeated and short-lived rhetorical commitments on devolution and not much else.

The President wants plausible deniability and no hostages to fortune on devolution. In political terms he is happy to trust his hardline allies to scuttle the enterprise – hence the passing of the buck to the select committee. In the meantime he will make out that Tamil political representation is stubbornly, if covertly, holding out for secession whilst at the same time, by drawing out proceedings, leave Tamil political representation high and dry, hemorrhaging credibility with its constituency.

In terms of process, the government-TNA consensus that comes out of direct talks being placed before the select committee is important because of the President’s political capital with the majority Sinhala community.  This is the time to lead; Mahinda Rajapaksa must have views on a political settlement, the need for one and the substance of it. The country needs to know; he needs to carry it along with him.  As for his hardline allies, given the importance of the issue, can he not tell them to put up and shut up or get out?

Other substantive issues that need attention are return of IDPs to their homes and out of shelter in transit camps and with host families, the provision of information on detainees to their families – an issue that was a subject in the GOSL-TNA talks and more recently of a circular, all of which to no avail- land dispute settlement and de-militarization.  The denials of the government on the latter score fly in the face of the ground realities.  Even the Leader of the Opposition in India and her fellow MPs are on record on the intrusion of the military into civilian and civic life in the north after their visit to the province. More recently the leader of the Students Union of Jaffna University was assaulted.

To demilitarization must be added the calls for investigations by the LLRC with regard to the ACF murders, the Trinco Five, the Channel 4 allegations and the incidents of civilian deaths for which the security forces are responsible, albeit, accidentally according to the LLRC.  Whilst the Geneva resolution calls upon the regime to state what it will do to ensure accountability – a key issue on which it notes the LLRC falls short- the commencement of investigations on what the LLRC has identified will go some way to checking the egregious culture of impunity.  Investigations have to be independent and it is worth monitoring as to whether information made available in Wikileaks cables will be acted upon in respect of the Trinco Five.

There is also the matter of independent commissions and that of right to information legislation.  Neither is likely under a regime so wedded to control, but nevertheless both are so fundamental to democratic governance that they must be kept on the agenda of substantive reforms.

Substantive, demonstrable progress is the need of the hour.  There are mileposts in the storm, so to speak – the Universal Periodic Review in October, the 22nd session of the UN Human Rights Council in March 2013 and the Commonwealth Heads of Government Meeting to follow in November 2013.