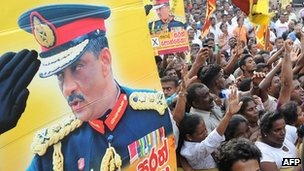 Sri Lanka’s ex-army chief Sarath Fonseka is barred from political office for seven years, despite being freed from jail on Monday, his lawyer says.

Mr Fonseka stood against President Mahinda Rajapaksa in a presidential election two years ago, lost and was imprisoned shortly afterwards.

Mr Fonseka’s lawyer, Nalin Laduwahetti, says that the terms of his release prevent him from running for office.

They are trying to secure a full pardon for the chief.

The President has remitted Mr Fonseka’s two-and-a-half year jail sentence for corruption, but has not pardoned him or annulled the sentence already served.

This means he is subject to a seven-year restriction of his civic rights.

The government is interpreting the Constitution to rule that he can vote but cannot contest an election in that period.

The attorney-general has also noted that there is still one case pending against Mr Fonseka, that of harbouring army deserters.

Mr Laduwahetti told the BBC that they are "looking at all political and legal possibilities" to try to secure a more complete pardon for the former army chief.

A supporter of Sarath Fonseka and former Chief Justice, Sarath Silva, has commented that Mr Fonseka is "a prisoner in the open".

Mr Fonseka was elected to parliament shortly after his unsuccessful presidency bid, but was in detention by then. He was later disqualified from being an MP.

Despite his release from detention, the mood surrounding Sarath Fonseka is not conciliatory.

He himself says that he is intent on changing what he calls Sri Lanka’s corrupt political culture.

On the day of his release anonymous posters appeared in many places, warning: "Beware: the ungrateful snake has been freed."