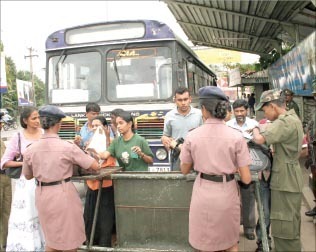 In the unforgiving heat of a pre-monsoonal noon the young soldiers were rehearsing a march past on the scenic Galle Face Green, Colombo’s famed promenade. Even the gentle breeze from the enveloping Indian Ocean brought only a dusty relief, its saltiness adding to the heavy sweltering air. The grass on the ‘green’ is a thick brown, burnt by the sun, trampled into small twigs by the heavy boots. My effusive Tuk-Tuk driver Gamini tells me the administration made an effort to make it green some years back by cordoning off the grassy areas and regular watering. But no sooner the cordon was off “the Muslims came in their numbers and walked all over, threw garbage everywhere and destroyed the grass”. Apparently the small Muslim community of Colombo lay heavy store by the ‘ocean air’, but as implied, with scant regard for the grass under their feet.

My Tuk-Tuk driver is a Sinhalese, the majority race in the small island nation of Sri Lanka. The country was embroiled in a bloody civil war for decades primarily between the government forces led by the Sinhalese majority and the smaller Tamil minority group. Although relatively fewer in numbers, the Tamils are concentrated in the North and East of the country. Due to that fact they are in a dominant position in those relatively under-populated provinces of Sri Lanka, it seems to have given them a status quite out of proportion to their actual numbers.

In 1948 when the British, tiring of their imperial role in the tropics pulled out of the colony, the Tamils who are Hindus (while the Sinhalese are predominantly Buddhists), feared they would be swamped by the Sinhalese who would naturally command the political structure. Since then there were simmering grievances on both sides but mainly the Tamils felt increasingly marginalized by a resurgent Sinhalese political power. Apparently the spark that ignited the subsequent violent campaign was the language issue, the majority Sinhalese demanding primacy of place for the ‘Sinhalese’ language. However English remains by far the preferred language of communication among the elite of both communities even today. There is hardly a single progeny of the elite studying in the local universities, which teach in the vernacular. A foreign education is a much desired status symbol among the Sri Lankans, an unspoken acceptance of the truth of a failed ‘free’ education system. Most people I met bemoaned the mediocre quality of nearly every product of the education system, whatever the field.

According to Gamini the military rehearsals have gone on nearly for a week now. Most inconveniently for everybody these are held along the Galle Face Green which is right in the centre of the commercial hub of the Capital city. The closure of the roads and consequent re-direction of traffic to narrower roads resulted in hours of noisy, impatient traffic jams. In the unbearable heat tempers ran short. The usual unruliness of South Asia turned into utter chaos.

Evidently the Tamil terrorist group the LTTE, led by an implacable leader by the name of Prabahakaran had taken the battle to the heart of the Sri Lankan State bringing much death and destruction on the frail structure and the vulnerable economy of the country. Even a President of the country fell victim to a suicide attack by a terrorist sleeper cunningly introduced into his rather motley inner group. It is difficult to imagine the average South Asian, physically as well as psychologically as a natural soldier. They are not generally a hardy people nor are they warlike.

The ferociousness of Prabahakaran’s approach and his unconventional methods unhinged the usually complacent Sinhalese mindset and soon they were running around in circles looking for a way out. Even Norwegian negotiators, ever eager to lend a hand in far-a-way disputes made their way to Colombo.

Meanwhile it seems that Prabahakaran’s ruthlessness, while giving him a psychological edge over his confounded enemy, also carried the seeds of his own eventual destruction. He was not inclined to solidify politically, the advantages that his gun had gained for the cause. In a moment of sheer political lunacy, Prabahakaran ordered the assassination of Rajiv Gandhi the former Prime Minister of India whom he perceived as an obstacle in his way. India then on had no real   affection for the cause of the Sri Lankan Tamils.

Until 9/11 Western countries had often looked at the assorted terrorist groups in third world countries through rose-tinted glasses as it were. Now they began to see them very differently. True, these various terrorists groups maybe fighting for complex and obscure causes and invariably against corrupt and oppressive regimes, but they were hardly young kittens to play with on your bed.

From the early 2000s the tables were turning gradually on Prahabakaran who had by then spent at least two decades in boots with little to show for all the enormous hardships and sacrifices he had demanded of his followers. When in 2005 Mahinda Rajapakse, a nationalistic, raw and rather inward looking Sinhalese became President, Prabahakaran tested him as he had done with others before with raids and isolated assassinations. To his credit Rajapakse did not bow down but instead decided to take the battle to the LTTE. When it came to the crunch the much larger and better equipped Army quite easily overwhelmed the terrorists. Like the Al-Qaeda, LTTE’s actual power was far less than what their blustering propaganda made out. Prabakharan’s battle field tactics in the final battle seem to have put his followers in the same shoes as the famous Light Brigade when they charged the Russians in Crimea. In May 2009 Prahabakaran and his die-hard followers were completely annihilated in a bloody battle on the North/East coast of Sri Lanka.

The Parade the young soldiers were rehearsing for was the anniversary celebration of that event of three years ago. The government of Sri Lanka has decided to emphasize the military aspect of their victory over an armed insurrection by a minority group within the country. For an economy as small as Sri Lanka’s, the military hardware on display was quite impressive. Undoubtedly all of it imported and paid for with hard currency. Although, practically there is no external enemy to the island nation, it maintains permanently more than two hundred thousand men in its armed forces. All the demons are apparently internal.

Just a few hundred yards away from the parade ground, a motorcycle squad of the army was setting up a mobile checkpoint. For a moment it seemed impossible that the smallish soldiers could even maneuver their large powerful motorbikes. But although the handling of the machines was hardly gracefully, the menace of their presence in the middle of a bustling city was well conveyed.

The swagger of armed men when among the  unarmed, motor cycles confident zigzagging through the traffic with lights on, horns blaring, hands waving, there was no doubt that no laws applied to them.They were the top dogs under the sun. And then unsmiling, guns cocked the soldiers began checking the identities of the passing vehicles. Who were they looking for? Perhaps the victory is incomplete?