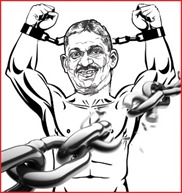 Gen. Fonseka was freed not because President Rajapaksa experienced a sudden democratic-epiphany or embraced the ‘quality of mercy’.

The politico-electorally disabling nature of the pardon indicates that it was made grudgingly, and under duress. Already, moves are apace to re-tarnish Gen. Fonseka’s reputation. The morning after he was released, an anonymous and ubiquitous poster warned, ‘The ungrateful-serpent is free; be careful’ (that colourful characterisation doubtless indicates how some Rajapaksas view Gen. Fonseka!). Efforts are being made to misinterpret a statement he made arguing that Sri Lanka need not fear any international inquiry of alleged war crimes. So why pardon Gen. Fonseka? Was it to ensure the success of the Washington visit by Minister-Professor G. L. Peiris? Was it to forestall a verdict favourable to Gen. Fonseka by the Supreme Court? Was it in the hope that Gen. Fonseka, in his political naivety, will confound a confused opposition, and, perhaps, attack the budding UNP-TNA understanding?

Whatever the reason, the Fonseka pardon is a positive measure, not just because it enabled the former army commander to return to his family but also because it indicates that the Rajapaksas are not totally immune to international pressure.

The vulnerability to Western pressure (plus the economy) is currently the regime’s sole Achilles Heel. The Rajapaksas are not like Hugo Chavez, genuinely contemptuous of the West; nor do they not want to end up like Robert Mugabe. They want the West to accept them the same way the West embraced so many despotic dynasts from the Samozas and the Duvaliers to the Gaddafis and the Assads. It is in Washington, London and Paris Mahinda Rajapaksa wants to cut a dash, not in Beijing or Tehran. For instance he would not want anything to mar his upcoming London sojourn; one can already envisage the mammoth billboards depicting the President (alias ‘The World-Conquering-Leader’ and ‘The Universally-Renowned-Lord’) in tête-á-tête with Britain’s Queen and Prime Minister!

Thank goodness for men and their vanities.

Minister Peiris arrived in Washington with a ‘detailed reconciliation plan’ which the US Secretary of State praised as ‘good’. Unfortunately the contents of this ‘plan’ are yet to be disclosed to the Lankan parliament and people. Clearly Ms. Clinton knew that the Rajapaksa regime had concealed the ‘plan’ from its own people because she reportedly urged Minister Peiris to make it public.

The President’s immoderate stance was in marked contrast to the fluidity displayed by his External Minister in Washington, who even promised to investigate alleged war crimes, including by Lankan Forces!

That contradistinction reveals the two-faced nature of the Rajapaksa regime.

The regime is anti-democratic and has little respect for the rule of law. Given the enfeebled nature of the opposition, and in the absence of a strong and independent judiciary, often the only impediment to the Rajapaksa despotic-dynastic project is international pressure.

The tragic fate of the 17th Amendment which had no regional or international stakeholders, demonstrates this unhappy truth. Had there been strong and sustained international pressure to save the 17th Amendment, the regime may have come up with a less harmful compromise, such as removing Presidential term-limits without turning the Independent Commissions into Presidential appendages.

The Rajapaksas want to turn Sri Lanka into a political island, subjected totally to their needs, whims and fancies, from white-vanning to treasure-hunting. They use the perennial patriotism-argument to discredit international pressure, to create a Southern consensus in favour of political-xenophobia.

Tellingly, the very patriots who howl against international intervention remain mum when the government imposes economic hardships on the masses in its eagerness to obtain IMF money by adhering to IMF conditionalities. These ‘patriots’ remember national sovereignty only when the West urges the regime to abide by democracy and the rule of law.

The Duminda Silva saga is emblematic of the Siblings’ dismissive attitude towards the judiciary and the resultant weakening of  the rule of law. According to Colombo’s Additional Magistrate Prasanna Alwis, “no progressive steps have been taken by the CID though more than six months had elapsed since the order was issued regarding the arrest of Silva…” (Ceylon Today – 23.5.2012). The CID’s response was that “they had not received any directions from the Attorney-General regarding the incident yet… The Magistrate stated that the Court can only issue order and direction … (The) Court could not take the responsibility if the relevant parties failed to carry out the required actions on orders” (ibid). With the AG’s Department and the police under Presidential control, even a strong, courageous and independent judiciary might not suffice to ensure justice.

A democracy cannot be dismantled from within without causing a rupture with the principle of universal rights. Transforming a democracy into its opposite can be turned into a hegemonic project only if the idea that some people have greater rights than others can be injected into society. An effective way of doing this is by re-imaging various segments of the populace as obstacles of national interests and objectives. Under Rajapaksa rule two key population segments are being re-imaged: the minorities and the poor. An oppositional unity between the poor and the minorities is clearly a Rajapaksa nightmare.

In a country where white-vanning thrives, ministers tie public officials to trees, publicly, and the war-winning army commander is persecuted for challenging the Rulers, is it likely that a prudent man, when asked by a stranger (face-to-face or via telephone) whether the President is doing a good job, will say no?  The fact that 60 out of 1000 Lankans dared to express openly their dissatisfaction with Rajapaksa leadership (in the latest Gallup poll) indicates that the greater bar to a strong national resistance is the lethargy of the leaders and not the dormancy of the people.