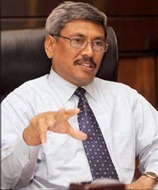 “Earlier before the war all were Sinhalese,” in Sri Lanka. It is not appropriate to view the north of the country, over which a separatist war was fought, as a predominantly Tamil area, SL presidential sibling and defence Secretary Gotabhaya Rajapaksa was cited saying by the BBC News that interviewed him in Colombo. Commenting, a political analyst in the island said: The Rajapaksa regime, including its former military commander Sarath Fonseka, has been repeatedly reflecting only the pathological aspiration of the Sinhala nation to make State exclusive for it in the island. India and the USA unnecessarily blight it, rather than conceding to the innate reality of allowing the Sinhala nation to have its trouble-free State by separating the country of Eezham Tamils.

The analyst also pointed out how the BBC News, falling in line with the agenda of the USA, its self-styled international community and India, projects a simulated picture of the realities.

“Many Tamils favour provincial devolution to give them a greater voice in areas where they predominate. The government and the largest Tamil party have been holding talks on this issue, but these have currently stalled,” said Charles Haviland of the BBC News, reporting the interview from Colombo on Monday.

From the Eezham Tamil public to serious Sri Lanka watchers know well that reducing the liberation aspirations of the genocide-facing Eezham Tamils to mere non-descript ‘devolution of powers to provinces’ is the simulation of the establishments in Washington and New Delhi.

From New Delhi’s Natchiappans, Shushmas and Rangarajan’s to Washington-IC’s Blakes and Solheims, and from The Hindu to now the BBC, simulate the same false picture against all realities, to thrust an agenda with which a genocidal war was masterminded. Only the nuances differ: whether to protect Rajapaksa – their tool in the agenda – openly or with a smokescreen, the political analyst in Colombo said.

According to informed circles, an orchestration is now taking place behind the screen to trap the ‘articulating’ actors of the diaspora in the USA and in London to fall in line with the hijacked polity of the TNA.

Tamils in the island, in Tamil Nadu and in the diaspora have to critically note what Haviland has simulated than what Gotabhaya has said. Why couldn’t they see the mandate for independence enacted and re-enacted by Eezham Tamils in the island and in the diaspora, and call for a UN referendum to find out for themselves before passing judgements, asked the political analyst.

The BBC on Monday cited Gotabhaya defending Sinhala colonization and demographic genocide of Eezham Tamils as the right of the Sinhalese. “I’m not talking about the forced settlements, I’m talking about the freedom for a Sri Lankan to live anywhere in this country," Gotabhaya said, asking, whether the Tamils were correct in viewing the north as a predominantly Tamil place.

According to SL government census only 7,400 northern ‘Sri Lankans’ were killed during the last months of the war, while on the side of the SL soldiers, 6000 lost life.

Gotabhaya in the interview said that there were only a few civilians who were killed in the crossfire between the SL Army and the ‘terrorists’.

He meant that a vast majority of even that contracted number of 7,400 were the LTTE combatants.

Census had been taken by visiting family after family, Gotabhaya said, adding that on alleged violations, the responsibility is for others to prove.

"Then we can punish, no problem, but you have to prove that," Gotabhaya said.

The released genocide general Sarath Fonseka also has recently said that the SL Army had made no mistakes.

The confidence of Gotabhaya and Sarath Fonseka to speak in these terms basically comes from the support the USA and India have given and internationalized through the UN, for the implementation of Sri Lanka’s LLRC report that is nothing but a convenient smokescreen to erase crimes and to complete the genocide, commented the political analyst in Colombo.