The international players knew what was going to happen in May 2009 to the Tamils but they did nothing to prevent it, and that was a shame right at the beginning of the 21st century, and a shame for the entire century, stated Mirham Yigit, Head of Kurdish Institute in Germany, in an interview to TamilNet. Talking about the current phase of the Kurdish nationalist movement, the role of the Kurdish diaspora, the importance of ideology in the struggle, the senior Kurdish activist said that when “illegal and militarist states” cooperate with one another, it was necessary for people oppressed by such states to build greater solidarity with each other.

TamilNet: Could you inform our readers of the current stage of the Kurdish nationalist movement? 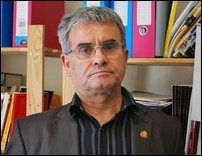 Mirham Yigit: The Kurdish struggle is at its apex now. Not only in the Northern Kurdistan in Turkey but in all parts of Kurdistan. In all four parts of Kurdistan there is a strong resistance. Our struggle is not only confined to military but is also there in civil areas. At the moment the mass movement, including people, civilian activists and people organized at grassroots are developing step by step and it is getting stronger. Both inside and outside the country this is similar. At the moment the Kurds in four parts of Kurdistan have gone beyond the borders that the states established between them and the level of communication is really high. Kurdish people who did not have a status are now moving to a state where they will have a status. At Southern Kurdistan, the Kurds have a status. And our struggle has reached a point in Northern Kurdistan that currently we have 36 deputies in Turkey. 6 of them are in prison now. If there is freedom, that 36 could be more.

The important point is that the Kurdish people and the Turkish people in Turkey have developed some kind of a dialogue. Kurdish and Turkish at the moment have established a people’s congress working together. This is important for us because we want to solve our problem by our own hands and not let outsiders to interfere. In the middle-east now there is not just one party behind the government but there are also strong opposition groups, because some of the opposition groups require support from forces outside, like America. If opposition works like that, it would be discredited and such an opposition can’t bring democracy.

In that development the role of the Kurdistan Workers’ Party (PKK) and its leader Abdullah Ocalan is significant. The Kurdish media, radio and TV was promoted and established with the support and backing of the PKK. And likewise the Kurdish National Congress, composed of different parties, also backed by the same. The struggle led by the PKK and Abdullah Ocalan for the past 30 years is reaching a point where something can be resolved. For the last few years we have seen many conferences, for example conferences of women, youth, and different sections of society. The latest conference is one which happened at a city in Southern Kurdistan is one such. That conference is a step towards further unity among the Kurds.

At the moment, in academic spheres, scholarly works on both PKK and Abdullah Ocalan has been undertaken. And the accusation of ‘terrorism’ that Turkey imposed on the Kurdish struggle is now disappearing. Since 1993, the PKK and Ocalan have declared numerous unilateral ceasefires for peace and dialogue. And a circle outside the state who wants peace is now surfacing. And at the moment, 99 municipalities have been won by Kurds. And the Kurdish nationalist struggle wants the people to run their own affairs based on participatory democracy. And peace is approaching generally and we are more hopeful than ever.

TamilNet: After the Sri Lankan government’s military victory in May 2009, Turkey was one of the first states to congratulate it and consecutively, it has also threatened the PKK with a ‘Sri Lanka style’ solution. What do you think of the possibility?

Mirham Yigit: This is a shame for Turkey. To see such a massacre, such a butchering of people like Sri Lankan government did, and if you congratulate that, it is shameful. And the problem here is that the Turkish people, represented by this government, are congratulating this massacre instead of protesting. One day people from Sri Lanka, both Sinhala and Tamil, will remind Turkey of such things they said.

The illegal and militaristic states cooperate with one another. And hence, the people who are oppressed by such illegal and militaristic states should cooperate with each other. When genocide of Tamils occurred, the Kurdish people were pained, they felt it happened in Kurdistan. This is a human feeling! No one should be happy when such a massacre is happening. And people should see how power and states do such things to people. After the genocide of Tamils by Sri Lanka, some journalists in certain circles in Turkey, they were advocating similar approach to Kurdish issues as well.

According to evidences that we saw, the international players knew what was going to happen but they did nothing to prevent it. So those factors are complicit in the massacre of Tamils. That was a shame right at the beginning of the 21st century, and a shame for the entire century.

Turkey sought to do the same thing in Qandil mountains in Kurdistan. Both Turkey and Iran cooperated together and attacked the mountains where the guerrillas are positioned. But the geography of Qandil is different. This is a harsh mountainous terrain. And because the guerrillas know the geographies and they positioned themselves deep within those mountains, and because they had mass support from all parts of Kurdistan, that plan failed.

TamilNet: Just as Turkey congratulated the Sri Lankan government, Kurdish activists sympathetic to the Kurdish national cause extended their solidarity to the struggle of the Eezham Tamils after the genocidal massacre in 2009. How do you see this solidarity in the future?

Mirham Yigit: That solidarity should not only sustain, it should extend. After the genocide, our media kept working on the Tamil issue. Many times they organized TV programmes on the same. And we have sincere sympathy for the national struggle of the Tamil people. We see them like ourselves. This is not opportunistic. This is important for us.

TamilNet: Kurds are a very active diasporic community in many Western democracies. How does the movement back home look at the role of the diaspora?

Mirham Yigit: The Kurdish diaspora is very important for the movement because for many years the Kurdish struggle was funded by the diasporic community. And the Kurdish TV station was also founded by the Kurdish diaspora. In Kurdistan, over 4000 villages have been destroyed and this led to poor economic conditions. And due to the harsh policy of the state, many artists and cultural activists also had to flee their country.

The diasporic community not just funded the struggle, but also politically trained cadres and sent them back to the country. The diaspora is also in a position to expose the repressive policies of the Turkey state. In Europe, people from different parts of Kurdistan come together and this helps them to enrich the national struggle. And Kurds now see that they have one common fate.

TamilNet: The Kurdish movement is considered to be one of the most ideologically advanced movements in the region. Does the diaspora act out of a sense of Kurdish identity alone or is it politicized by the movement’s ideology?

Mirham Yigit: Once people are ideologically motivated, this can enable them to promote their national identity as well. The national consciousness is established among a group and spreads among the community. Many Kurds inside the homeland were not allowed their identity, but they became conscious of their identity in abroad. Many Kurds come to Europe and learn the Kurdish language… they put Kurdish names to their children. And some of these children also go back to the country to serve the people. And now, the diaspora and Kurds inside the country have a stronger communication.

The state tries to prevent people from having an ideology, because ideology embodies power. Ideology is systematized thought. A thought can be really positive, good and progressive. But when it is not systematized and institutionalized, it would be powerless. And ideology alone is not sufficient; it should be owned by the people. If people don’t stand for that ideology and don’t follow it, it would just be a book in the shelf. The ideology should become a programme for the people, a programme outlining what should be done today, tomorrow and the day after.

The movement’s ideology has become a programme for the diaspora and has become a culture, a part of life for the people. This is the ideology that creates people for the struggle and they see the struggle as part of their lives. And this accounts for power of our organization in Kurdish circles.