After an unforgettable four days of Jubilee celebrations, the Queen would have been forgiven for taking time out to reflect on her moment of history.

But she did not win the admiration of a nation by letting the grass grow under her feet, so she got straight back to work today by attending a lunch with Commonwealth leaders.

She was joined by more than 70 guests, including David Cameron, at a lunch hosted by the Commonwealth Secretary-General, Kamalesh Sharma, to celebrate her 60 years as head of the Commonwealth. 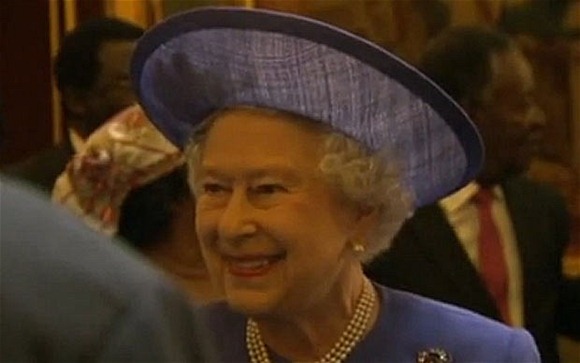 The Queen met leaders from across the Commonwealth at a lunch at Marlborough House today Photo: ITN

Meanwhile the Prince of Wales, who shared the Queen’s balcony appearance at Buckingham Palace on Tuesday, also had his feet firmly on the ground as he attended a sheep show in Scotland.

In stark contrast to the crowds that had cheered on the Queen on the previous day, the sovereign was confronted by angry human rights demonstrators protesting at the attendance of Sri Lanka’s president Mahinda Rajapakse at the lunch.

Their chants echoed around the forecourt of Marlborough House in Pall Mall, central London, the headquarters of the Commonwealth Secretariat, as the Queen stepped out of her car.

Mr Rajapakse, whose Range Rover did not carry a flag because of security concerns, was jeered by hundreds of Tamils and other human rights campaigners who accuse him of torturing prisoners. He had earlier been forced to cancel a speech to the Commonwealth Economic Forum.

The Queen appeared relaxed about the presence of the protestors as she was handed a bouquet on her arrival by nine-year-old Aduke Badale, the daughter of one of the Secretariat’s staff.

Wearing a floral print silk dress by Stuart Parvin and a blue wool crepe hat, the Queen was welcomed by Mr Sharma, who told the guests: “It gives me great pleasure to welcome you all on this very special day in the history of the Commonwealth.”

The Queen was presented with a plaque on which the leaders expressed their “profound admiration and abiding appreciation for the manner in which Her Majesty has diligently and faithfully served the Commonwealth”.

The lunch was the Queen’s second official engagement of the day, following an audience with the Canadian Prime Minister, Stephen Harper, during which she unveiled a new portrait of herself by the Canadian artist Phil Richards, commissioned by the Government of Canada.

In Scotland the Prince of Wales, or Duke of Rothesay as he is known north of the border, opened the biennial Scotsheep event in the grounds of Dumfries House, the stately home renovated by charities brought together by the Prince in Cumnock, Ayrshire.

Carrying a shepherd’s crook and wearing a flat cap, or bunnet, and black wellies, the Prince told farmers it was “a shame” that he had not been able to visit the previous day, but joked that he had had “a very busy few days”.

He had travelled to Scotland immediately after Tuesday’s Jubilee events and spent the night at Dumfries House before opening the event, which is the flagship show of Scotland’s National Sheep Association.

The Duke of Cambridge was heading back to Anglesey to resume his work with his RAF Search and Rescue Squadron and Prince Harry has returned to his Apache helicopter duties with the Army.

Next week the Queen will resume her round-Britain Diamond Jubilee tour by visiting Nottingham, Lincolnshire Northamptonshire and Hertfordshire.