Queen Elizabeth II, celebrating 60 years of her coronation, had to pass through thousands of Eezham Tamil protestors before lunching with Mahinda Rajapaksa, the President of genocidal Sri Lanka, and other heads of states at the Marlborough House in Central London, the headquarters of the Commonwealth. “Sri Lanka protest greets royal lunch guests,” said The Independent in its headlines. The Queen passed human rights protestors on her way and she was joined by more than 70 guests, including Prime Minister David Cameron and leaders across the association of nations, as they arrived to angry scenes. The chants of the demonstrators echoed around the forecourt as guests arrived, The Independent further said. Around 8,000 protestors were seen at the Marlborough House and earlier at the Mansion House, which was hired by Commonwealth Business Council (CBC) for Commonwealth Economic Forum. 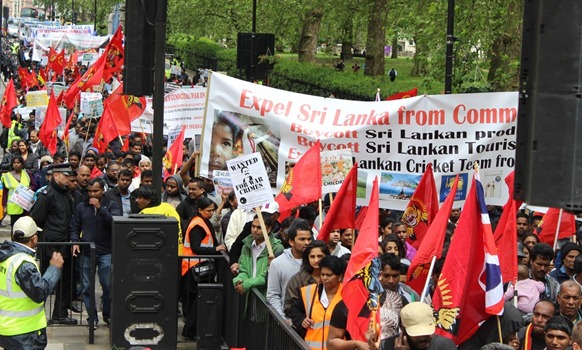 The spontaneous protestors later gathered in front of Park Lane Hilton Hotel where Rajapaksa was staying.

While leaving the Hotel on Wednesday evening, Rajapaksa’s car had to face a rain of eggs coming from the angry protestors.

Earlier in the noon, he was welcomed with a big jeer from the crowd. His car arrived at the scene at Marlborough House bereft of the Lion Flag, for security reasons.

Mahinda Rajapaksa, hosted along with his wife by the Queen, is leaving for Rome to meet The Pope, news sources said. The Sinhala Catholic Archbishop in Colombo, Cardinal Malcom Ranjit is close to Rajapaksa and is a defender of his regime.

Rajapaksa was invited to deliver the keynote address of the Diamond Jubilee Commonwealth Economic Forum organised by the Commonwealth Business Council (CBC) on Wednesday. But in the last minute the CBC “after careful consideration,” cancelled his address and the session itself, fearing mass protests from Eezham Tamils in London.

Reporting on the cancellation on Wednesday, The Guardian said the tickets to the event were costing 795 pounds plus tax for each.

A spokesman for Scotland Yard said it had agreed to guarantee the president’s security but the CBC had "decided it was not in their interest to stage the event" because of the extent of the policing required and the likely disruption to the City of London, The Guardian reported.

The Guardian simplified the anger of Eezham Tamils in London as resulting from cases of torture and rape of Tamil asylum seekers forcefully returned to Colombo by the UK government and said that the UK government is coming under increasing pressure to revisit its policy about deportation. 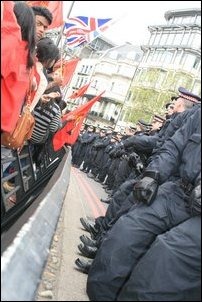 But, contrary to what sections of articulating diaspora Tamils interested only in ‘negotiating’ and not leading a struggle say, the Eezham Tamils are angry at the continuation of the very State of British colonial legacy in the island and they are particularly angry with those who conduct business over genocide and criminalise States all over the world, political observers in London said.

The demonstrators in London burnt the Sri Lankan Constitution along with the effigy of Mahinda Rajapaksa in front of the Marlborough House.

The Queen ‘appeared to fleetingly shake hands’ with him in receiving guests at the reception, both The Independent and The Guardian reports said on Her Majesty receiving Rajapaksa.

The head of the Commonwealth of Nations has become a captive of the so-called International Community of Establishments, said old-generation Eezham Tamils, who recollected the scene of the Queen removing her gloves and shaking hands with her teacher, C. Suntheralingam, even when the then Prime Minister of Ceylon, Sir John Kotelawala, was waiting to receive her in the parliament house at Galle Face in Colombo in 1953.

According to The Guardian, Rajapaksa was seated on the table directly to the Queen’s left with Babli Sharma, wife of the Commonwealth secretary general Kamalesh Sharma an Indian national; the Namibian president, Hifikepunye Pohamba, and his wife; and New Zealand’ prime minister, John Key, and his wife. 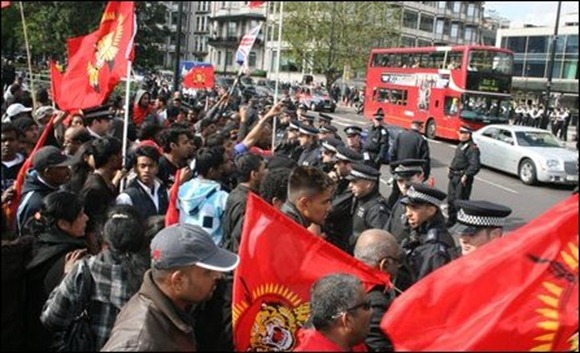