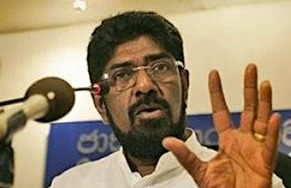 While commending the British government for the warm reception and facilities provided to President Mahinda Rajapaksa during his stay in London to participate in the Diamond Jubilee celebrations of Queen Elizabeth 11, the government today accused the Scotland Yard of failing to prevent the protest against President Rajapaksa by a section of the Tamil Diaspora.

Cabinet spokesman and Media Minister Keheliya Rambukwella charged at the weekly cabinet news briefing that the ‘Scotland Yard’ was a mere spectator at the protest held in front of the Marlborough House on June 6 and did nothing to prevent it.

“There was a fairly big crowd mainly Tamil youths who had gathered before the Marlborough House from many countries of the Euro Zone including France, Germany, Norway and Sweden. It is obvious that the Tamil Diaspora had been organizing this protest against Sri Lanka and President Rajapaksa for a considerable period of time. The Scotland Yard, famous for its crowd controlling, crime busting and intelligence services should have known this in advance. But unfortunately it did nothing to control or prevent the protest against a Commonwealth head of state who arrived in London on the invitation of Queen Elizabeth 11 and was a host of the British government,” Minister Rambukwella stressed.

Minister Rambukwella said the inaction of the Scotland Yard was more serious as it failed to maintain the rule of law and prevent a public protest by a proscribed terrorist group.

“The Scotland Yard had a legal obligation to prevent the protest as the LTTE was a proscribed militant organization in the UK,” he said.

Section 13 of the British Terrorism Act (BTA) of 2000 which declared the LTTE as a terrorist group says that it is a violation of the BTA if a person wears an item of clothing or wears, carries or displays an article in such a way or in such circumstances as to arouse reasonable suspicion that he is a member or a supporter of a proscribed organization.

The entire world including the law abiding British public watched in horror as to how the remnants of one of the most ruthless terrorist organizations staged a virulent protest against the head of state of a friendly country and a guest of the British government.

The Minister also expressed displeasure over the unilateral decision of the Commonwealth Secretariat to call off the address by President Rajapaksa at the Commonwealth Business Forum following the protests.

“There is a possibility that these protests and violence may turn against the British citizens themselves and the British government in the future,” he said.

Minister Rambukwella appreciated what he called ‘the star class treatment’ afforded to President Rajapaksa by the British government during his stay (Sandun A. Jayasekera)