Five years after seizing Paduvaankarai area from Eezham Tamils, the occupying Sri Lanka Army in Batticaloa has appropriated most of the rain-fed paddy lands and pasture-lands belonging to Tamil farmers in Paduvaankarai villages of Meeraan-kadavai, Nuraich-cheanai and Periya-ve’li claiming that it was ‘transforming’ and ‘developing’ the area into a tourist destination. The SLA has brought in Sinhala labourers from the South and has instructed the paramilitary groups to expel the uprooted Tamils, who refuse to hand over their lands to the military. The colonial SL Army Commander of the East, Major General Lal Perera is constructing roads with Colombo’s ‘development’ money while the resettled Tamils are denied of water and other basic facilities. 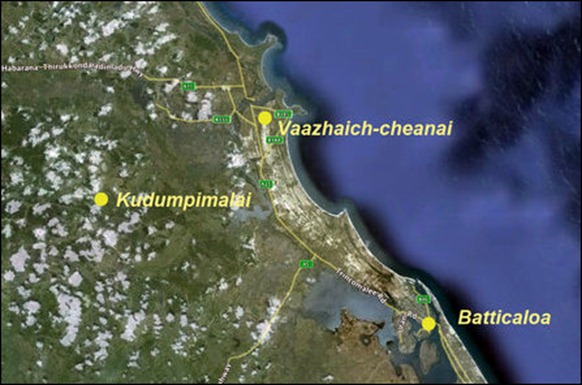 The agricultural lands are being appropriated by genocidal Colombo that schemes Sinhalicisation and colonisation of the area.

The SLA had seized the area from the Tigers in 2007. After long time, some of the uprooted Tamils managed to ‘resettle’ last year, but they have not been provided with any humanitarian assistance. The NGOs that attempted to help them were also ‘barred’ from entering the area. 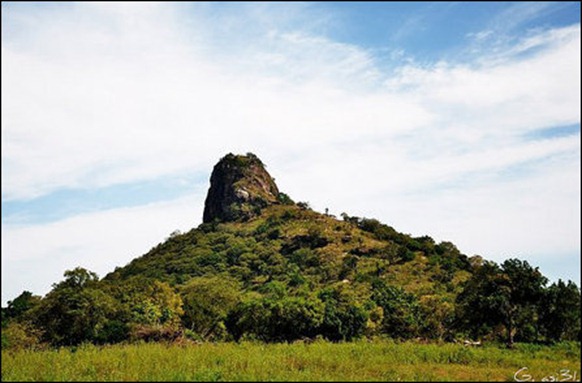 Kudumpimalai is located 534 feet above the sea level and is surrounded by several thousand acres fertile lands for paddy cultivation, high land crops and pasture lands with a few minor tanks.

The location of newly established checkpoints of the Sri Lanka Army at Allai-oadai and Maavaddavaan junction [Photo: TamilNet]

The genocidal commander of the SL military in the East, Major General Lal Perera, has gone on record vowing to complete the project before the end of July, Vinayagamoorthy Muralitharan alias Karuna, the paramilitary agent of SL military and SL deputy minister for ‘resettlement’ and ‘reconciliation’, has asked the Tamil people to ‘reconcile’ with the SL military, which, according to him was ‘developing’ the area.

The SL military commander is ‘developing’ roads. But, the native villagers are not allowed to use vehicles.

Without public transport, the uprooted Tamils have to travel by foot while officials and foreign tourists who travel to this area in heavy vehicles have to get prior permission from the army sentry point located in Welikanda.

Apart from the occupying military, only ‘developmental’ NGOs supporting Colombo’s agenda are allowed to enter the area through Welikande military post in vehicles.

Two years ago, SL presidential sibling Basil Rajapaksa, under the guise of tourist development Economic Development Ministry, appropriated lands along the coast of Ezhuvaan-karai area in the district and destroyed several hundred acres of forest with valuable medicinal plants used in the preparation of Ayurveda medicine.

In the meantime, Sinhalese fishermen from the South with the backing of occupying SL Army and Navy have started fishing in the seas of Tamil territorial waters and are appropriating lands along coastal villages in Koa’ralaip-pattu North, Ea’raavoorpattu and Ma’nmunaip-pattu North DS divisions.

While the war-affected Eezham Tamils are still living as refugees in their own land, from where does the Colombo government get money for building Buddhist stupas and military-business enclaves in the occupied country, wonder Tamil activists. The IMF, World Bank, ADB and other ‘donors’ may have to answer.