The biggest single post war issue, it scarcely needs a special mention, is the issue of governance — and under the rubric of governance, more precisely, the issue of corruption. As reams were written about the war, in terms of academic treatise and journalistic opinion alike, acres of newsprint and gallons of ink are now expended on the issues of corruption, nepotism and malpractice. 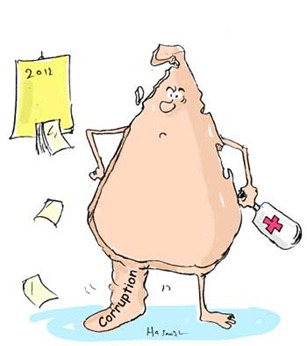 How deep do the roots of corruption go in this country? Very deep, they say and they are digging deeper. However, there is no quantification of the extent, not even from the anti corruption non-governmental organizations that have set themselves up as the guardians of the anti corruption effort.

But press reporting on the phenomenon of corruption is muted. One reason is that the print media particularly, are owned by persons who have some connection to authority at various levels of power — in order to survive. Legislative instruments such as COPE etc., have not famously been able to deliver for the simple reason that their findings are not acted upon, almost by tacit mutual consent between government and opposition members of Parliament.

Does that mean that society is doomed? At first glance, it appears to be so. Things are so bad that some of the corruption watchdogs including Transparency International are sometimes seen to be worse than the corrupt government bureaucrats and politicians themselves.

Several members of Parliament for example should be nowhere near the precincts of the assembly. Mervyn Silva is a shoo in such a consideration, but for other reasons such as subversion of election procedure, there are candidates such as Mahindananda Aluthgamage. They are scores of others who should have been disqualified by virtue of previous private conduct.

There is nepotism and graft at various other levels which watchdogs and sentinels find hard-put to expose or place under the spotlight for various reasons such as a number unwritten rules that have come into operation due to the inroads that have been made into society by members of the ruling classes i.e.: the political elite.

Under these conditions, the war —- and the reams that got written about it could appear to be a piece of cake compared to the issue of corruption that seems to have such Byzantine scope, and disruptive implications. The question could well be asked whether a country that could end what was termed an unwinnable war could deal with the hydra-headed issue of corruption under the circumstances?

With our institutions atrophied, and our accountability mechanisms such as COPE — or the palpably flawed ones such as the 17th amendment — having ended in a heap, corruption seems to be destined to go on until the next millennium or until the country is entirely destroyed by the venal, whichever comes first.

But, long-time readers of this column would remember that during the time the war was declared unwinnable, that this writer opined that every major law and order breakdown of the nature of an armed conflict has a time run.

Then, as it happened, there was such a period. It may not have been as short or convenient as most people would have wished it to have been.

But there was a time run, and the war ended. It did not end however in the way that the majority of the elite in society had expected; i.e.: after a long period of attrition in which the two parties wore out and came to a settlement.

Corruption has a time run too. Corruption as we know it would end in this country but as it was with the armed conflict things are bound to get a lot worse, before they get better.

As it has been the case with some of the most corrupt countries that came out of the corruption warp into a boom, such as say South Korea or even Malaysia, Sri Lanka would probably plateau in corruption — and by then the economy would have grown to an extent at which the corruption would no longer be tolerable or tenable.

Corruption will grow, then die out

This is no excuse for corruption in the here and now, but this reading of events squares with the theory that there would be a massive societal convulsion before corruption as we know it at the very base level that we experience the phenomenon in our society can be eradicated.

This reading runs in parallel to the script that was predicted in this column for the war. Not only are things going to get a lot worse before they get better —- but there would also be a convulsion — a most dangerous moment — where society would be teetering on the brink.

We had that during the war.

The country was running out of foreign currency reserves; there wasn’t enough money for more than a month of exports. Civilian life was becoming untenable; there was a societal breakdown of epic proportions.