There is general consensus among radicals in the Tamil liberation movement that except mass struggle, there is no other force outside Lanka or within that could bring any benefit to the Tamil people. Those who think there is, are not in the real world. As an example they point to what recently happened in London to Mahinda. While various groups can claim that it was their action that resulted in the dramatic success of getting Mahinda to run from London in shame for the second time, they assure that it was peoples’ power – the determination of the left organizations and Tamils activists in London – that really did the job. 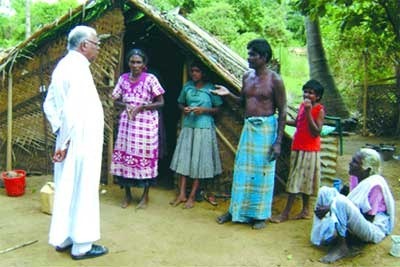 Bishop Rayappu Joseph, Bishop of Mannar, his clergy and the set of non-politicians who call themselves “Tamil Civil Society” have gained respect among these radicals for what they have done within the Tamil homeland. It is claimed that in general, the bishop and his group of activists are the people to whom the ordinary masses of Tamil homeland first turn to when they have a problem. That is why some 7,000 of them gathered in St. Sebastian Cathedral on May 27 to support and show solidarity with Bishop Joseph. There is a complaint that the TNA did not defend Bishop Joseph when he was slandered in Parliament by the Muslim cabinet minister, Rishad Bathuideen. Did they ask the minister to produce the evidence to document what he said, or if he did not have the evidence, to withdraw what he said and apologize to the Bishop? “The TNA did raise questions against the Muslim minister Rishad Bathuideen,” answered TNA MPs. According to them the TNA Vanni district MP and TELO president Selvam Adikalanathan raised questions in parliament against MP Rishad Bathuideen, supporting Bishop Joseph and asked the minister to apologize to the bishop for the comments made against him. They also engaged in a fast against Rishad Bathuideen.

The radical voice says, “Look. This is our problem. If we leave it to the UN, the UN Human Rights Council, the parliamentarians or any group, all of whom are “No Action Talk Only,” the Tamils in Lanka will be a dying entity. We have campaigned for the rights of the Tamil people to live with equality, dignity, and now to live in the country of their birth. Past rulers were bad but tyrant Mahinda is worse, much worse – and more is to follow. The guns that were turned on the Tamils will next be turned on the Sinhalese and the Muslims, which is already happening. What is needed is for civil society to rise. Both locally and internationally what is needed is a rise of civil society and mass action. We must record the suffering of the Tamil people and the struggle against it. This is what had to be distributed to the people in the world if  Tamils are to have any hope of international mass support for their entirely justifiable struggle to exist and if there is to be peace with justice in  Lanka.”

Now there is recognition for the struggle made by the proletarian and progressive movements in the south that stood for the liberation of the Tamil people. They have and still do challenge the Mahinda regime running huge risks. The united action front of the opposition, VV (Virodaya Viyaparaya), is also very important. For the first time in the history of Lanka there is a broad front of the opposition that includes the Federal Party. The Sinhala chauvinists are wild over this unity and they denounce Sampanthan for demanding the right to self determination. One Sinhala chauvinist claimed, “Perhaps the key segment of Mr. Sampanthan’s speech is that the adopted strategy to prove to the international community, especially India and the USA, that a solution for the Tamil people is not possible within a united Sri Lanka. The repeated use of the term ‘united’ rather than ‘unitary’ reveals that the strategy is not merely to convince the international community that a solution cannot be found within the unitary form and framework but rather within a united Sri Lanka, i.e. Sri Lanka as a single, united country. Despite several references to a ‘united’ Sri Lanka elsewhere in the text, this strategic perspective reveals a latent commitment to a secessionist goal by other means.” Such idiotic arguments cannot be defeated in the space of debate and discussion. It is necessary to build a mass movement to counter such idiocy. When intelligent people who campaigned for the right of self determination take up opposite position for the sake of positions and self benefits, arguments and debate become meaningless. Now it is necessary to not let down the radical Tamils who are looking at the Sinhala campaign for autonomy and self determination of the Tamil people.