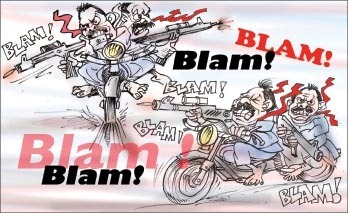 (By Tisaranee Gunasekara) Ten men on five motorbikes, armed with T56 rifles, descend on a legal political gathering. They shoot into the crowd, killing two and injuring several. For the next 15-20 minutes, they engage in a slash-and-trash operation, undisturbed. Finally, their job done, they leave as they came, with their weapons and on their bikes, into the night.

This happens in the home-district and the political-bastion of the country’s President, and just a few miles away from his family home.

Had we read this story in the foreign news pages, we would have concluded that such an incident can happen only in a god-forsaken land, in the throes of violent anarchy; or that the attack had the blessing of the said President: either a lawless land or a lawless President.

Is Sri Lanka a failed state or was the Katuwana attack done at the behest of the rulers?

If a murderous attack on a political gathering happens in the President’s backyard in a normal, law-abiding country, the state and the government would be in an uproar, society and media would be shrieking for accountability and many an official – from the august Defence Secretary to the lowly OIC – would be removed for gross dereliction of duty, if they did not resign in shame first. Yet, after the bloody melee in President Rajapaksa’s own ‘hood’, no officer was removed and none resigned; the rulers are unperturbed and society apathetic.

Therefore either Mahinda Rajapaksa is president in name only and Gotabaya Rajapaksa is the most inefficient defence secretary ever; or the violence is theirs.

Seriously, would the Rajapaksas, with their security-mania, remain sanguine, if their home turf is being menaced by a bunch of killers, independent of their control?

Just days after the Katuwana killing, TNA parliamentarians, engaged in a peaceful and democratic protest in Jaffna, were attacked with burnt-oil by two armed men on motorbikes. In an area surfeit with security forces, that crime too could not have happened without official knowledge and sanction.

Injustice, illegality and impunity cannot exist in one corner of a country, without it affecting the rest of the land, sooner or later. Tamils or Muslims cannot be denied justice and fair-treatment, without the same fate befalling the Sinhalese, someday.

The struggle to stop the march of despotism cannot be compartmentalised geographically or demographically. It must be waged in the South and the North, by Sinhalese, Tamils and Muslims.

Even the most advanced democracies have their anti-democratic moments. Fortunately, these moments do not add up to a transformation of democracy into its opposite. A qualitative transformation, from democracy to anti-democracy, can happen only when rulers want to rule forever, by whatever means and at whatever cost.

Can the Rajapaksas afford to lose power? Can they, and their kith and kin, maintain the lives they have become accustomed to under any other system than that of Familial Rule? Imagine the trials and travails of the Rajapaksa clan, under any other government, including a non-Rajapaksa SLFP one. Think of their collective plight, ranging from loss of employment, income and privileges to legal challenges over corruption, waste and blatant abuse of power.

From a Rajapaksa point of view, would such an existence be bearable? Will they not do anything in their power to prevent such an outcome?

Much is in their power right now, including turning elections into meaningless exercises with preordained results through well-placed acts of terror. The Katuwana attack fits that bill, because it happened when the regime is readying itself for several rounds of untimely Provincial Council elections.

Hambantota is more anti-democratic and more intolerant of opposition than the rest of the country, because it is in the advance-guard of the anti-democratic transformation. So, politics is less free and elections are more violent in Hambantota than anywhere else. It is also in Hambantota that the outcome of Rajapaksa-development can be seen in its quintessence – such as mega infrastructure projects which have no relevance to the day to day lives or economic activities of the people; mammoth roads denuded of vehicular traffic including bicycles, pedestrians and even dogs; and a landscape bare except for some construction-contraptions.

Hambantota is almost a ghost-town, with very few signs of private or individual initiative, including house-building. The depressing state of this Rajapaksa ‘Germania’ is an indication of what awaits a country burdened by megalomaniac rulers who violate laws and norms and ignore economic sanity and political prudence.

The interminable Rajapaksa self-hosannas notwithstanding, the Lankan economy is not invulnerable to the global crisis.

According to Fitch ratings, “Sri Lanka is most at risk” from the European debt crisis, because of “high external funding needs and weak balance sheet” (The Island – 12.6.2012). Last week, the Standard and Poor placed the Lankan banking system in the risk-prone category. According to the Central Bank, loans to the government and the private sector have increased in the first quarter of 2012.

With the Commonwealth summit of 2013 and Asian Youth Games in 2017, the regime’s need for funds will increase exponentially.

Thus the decision to seek another IMF bail-out even before the last one is complete. This road will lead to our own Greek Tragedy. IMF bailouts are infinitely worse than Eurozone bailouts. The Brettonwood-Twin pioneered the method of asphyxiating the patient to cure economic-ills. The IMF is like those early physicians who regarded cupping (bleeding patients) as a panacea for all ills. And it is not the rulers who will be bled dead-white and stone-dry, but ordinary Lankans.

Import taxes of several essential goods have reportedly increased. As the regime imposes more and more economic burdens on the masses, violence and malpractices will become essential to win elections and maintain stability.

The Armed Forces are being strengthened and moulded, so that they can step into the breach created by the erosion of popular support and prop up the regime against public and voter discontent. Sinhala-Buddhist supremacism is being promoted, in order to provide ideological cover to the familial project. (The political upheavals in Egypt constitute a clear warning of the danger of giving the military an economic stake and a political role).

The Rajapaksas will depart the political-scene some day, willingly or unwillingly. Their legacy will include an economic wasteland, an oversized military with a Superman-complex and Sinhala-Buddhist extremists addicted to lording it over minorities; plus habits which are antithetical to democracy and peace, decency and intelligence.

For instance, the UNP-led CMC seems to have caught the Gotabaya-mania for cosmetic-solutions, as is indicated by a plan to remove birds’ nests from city’s trees at ratepayers’ expense! The reason is said to be the foul smell of bird droppings. This in a city with overflowing drains, spilling sewage and rotting garbage… Clearly getting rid of the Mahinda Chinthanaya is going to be harder than evicting Mahinda, Brothers and Sons.