The constituting parties of the Tamil National Alliance (TNA), Tamil National Peoples Front (TNPF) from the North-East together with Democratic Peoples Front (DPF) led by Mano Ganesan and the United Socialist Party (USP) led by Sritunga Jayasuriya from South together with other Tamil and Sinhala activists staged a protest demonstration in front of the Pi’l’laiyaar temple at Thirumu’rika’ndi on Tuesday. Suresh Premachandran of the TNA, who was among the politicians taking part in the protest, said that the Sri Lankan military is following the Israeli model and is engaged in rapid Gazafication of the Tamil homeland.

The TNA MP said the Sri Lankan state was deconstructing the concept of Tamil homeland by scheming military backed settlements of Sinhalese like the Israelis were doing in the occupied Palestine.

The protest at Thirumu’rika’ndi took place despite the victims, who were scheduled to take part in the protest, were forcefully transported away at gunpoint by the occupying SL military from their transit camp situated at the Hindu Tamil Viththiyaalayam on Tuesday. 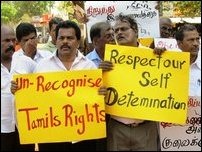 The people of the locality had been threatened by the SL military not to participate in the protest.

The SL military intelligence-operated ‘media workers’ were roaming around taking photos of the participants.

Hundreds of Sinhala soldiers and policemen were deployed in the area while the protest was going on.

The protesting activists demanded the SL military to withdraw, let the people have their own land, and upheld the Right to Self-Determination of Tamils. They also voiced for the release of the prisoners of war and political prisoners.

The protesters also questioned where the SL military was keeping the people whom it forcefully transported away from Thirumu’rika’ndi school on Tuesday.

The TNPF, which initiated the protest campaign in Jaffna against the land grab, also took part in the protest. Selvarajah Kajendren of the TNPF took part along with the TNA politicians.

V. Ananandasangaree of the TULF also took part in the protest.

Sritunga Jayasuriya of the USP, Mano Ganesan and Councilor S. Bhaskara of the DPF had come from South with their activists, expressing solidarity with the Tamils in Vanni, who are deprived of their lands and are denied their democratic right to protest against the genocidal land grab.