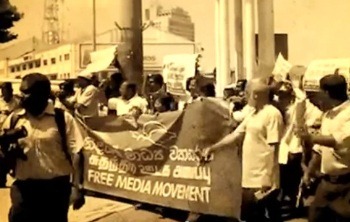 The Sri Lankan government should immediately end harassment of media outlets and journalists in violation of the right to freedom of expression, Human Rights Watch said.

Following is the text of a statement issued by the organization on the worsening human rights situation in the banana republic:

In the three years since the end of the armed conflict with the Liberation Tigers of Tamil Eelam (LTTE), President Mahinda Rajapaksa’s government has expanded its efforts to silence critical views.

On June 29, 2012, the Criminal Investigation Department, acting on a court order, raided the offices of the Sri Lanka Mirror, a news website, and Sri Lanka X News, a website of the opposition United National Party.

The authorities confiscated computers and documents, and arrested nine people on the grounds that the websites were “propagating false and unethical news on Sri Lanka.”

They were charged under article 120 of the Penal Code, which imposes up to two years in prison for those who “excite or attempt to excite feelings of disaffection to the president or to the government.” The day after their arrest the nine were released on bail.

“The government raids did not just target two media outlets but were part of a broader effort to intimidate and harass all critical journalists,” said Brad Adams, Asia director at Human Rights Watch. “Sri Lanka’s poor reputation on free speech will only sink lower unless these assaults on the media stop immediately.”

Harassment of media outlets has taken various forms. On June 26, a Tamil-language website, Tamilwin, was temporarily blocked by two internet service providers in the country.

Tamilwin had reported on opposition-led protests in northern Sri Lanka against alleged land grabs by the military.

In November 2011 the government blocked five websites, including the Sri Lanka Mirror, and introduced a requirement that all websites dealing with Sri Lankan affairs must register or face legal action.

The restrictions were not provided for by law nor were they strictly necessary for a legitimate state purpose, as required under international law.

Blocking the websites, as well as the arrests under article 120 of the Sri Lanka penal code, appear to violate Sri Lanka’s obligations under article 19 of the International Covenant on Civil and Political Rights.

In May the Supreme Court refused to allow to proceed a fundamental rights case brought by human rights activists against the government’s blocking of the websites.

“Instead of ‘shooting the messenger’ by harassing the websites that are critical of government policies, the government should focus on addressing the problems raised,” Adams said. “The government only seems interested in preventing these issues from being exposed or discussed.”

During the three-decade-long war between the government and the LTTE, journalists were frequently the targets of attack by both sides.

Three years since the conflict ended, in May 2009, the government continues to intimidate and threaten journalists and news organizations that express dissenting views. Senior government officials have called such critics “traitors,” a serious charge in a country where many journalists have been killed.

The government has failed to bring to justice those responsible for any of the killings or enforced disappearances of journalists in recent years. For example, the investigation into the January 2009 killing of Lasantha Wickremetunga, the outspoken editor of the Sunday Leader newspaper, has produced no arrests.

There has also been no progress in the January 2010 “disappearance” of the journalist and cartoonist Prageeth Eknalogoda of Lanka eNews. In November 2011 Mohan Peiris, a former attorney general, told the United Nations Committee against Torture in Geneva that Eknalogoda was alive and living outside the country.

But in June, when called to testify before the magistrate’s court about Eknalogoda’s whereabouts, he said he did not know them and could not recall where he got the previous information.

The government’s campaign of harassment and intimidation of the media, plus the failure to investigate seriously abuses against journalists, has led to widespread self-censorship and caused many journalists to flee the country.

According to the Committee to Protect Journalists, 23 journalists have been forced into exile since 2007 and only three have returned.

After the June 29 raids, governments raised serious concerns about violations of the right to free expression in Sri Lanka. The US embassy in Colombo called for an end to the harassment of journalists and said in a statement: “We have raised on several occasions our deep concern over efforts to suppress independent news media, including the blocking of news websites, intimidation, and disappearances of journalists.”

A statement from the European Union said that, “Any action intended to intimidate independent journalism and or limit freedom of expression is in contradiction to UN human rights standards.”

“The Sri Lankan government has done nothing in response to the media concerns raised by other countries except to dismiss them,” Adams said. “This sadly mirrors the response to rights issues more generally.” – TWL Bureau