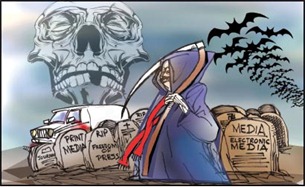 Long before the election is held, the first result is out.

Two anti-government websites were raided and their staffers arrested (including the tea-boy), within 48 hours of the dissolution of North-Central, Eastern and Sabaragamuwa Provincial Councils.

The muzzling of Sri Lanka Mirror and Lanka X News marks the commencement of a new anti-democratic wave. Neither website was illegal or clandestine; both were duly registered with the Media Ministry. Their sin, according to the Media Centre for National Security, was “propagating false and unethical news”.

These are not the only ‘sinners’ against Rajapaksa Rule; according to the MCNS, “Websites operated by certain quarters with vested interests are trying to bring disgrace to the country and the people, especially at a time when the country is undergoing a period of social and economic revival”.

As the election season advances, the regime will spread its dragnet ever wider.

Can an election be a democratic exercise when dissent is criminalised and dissenters taken into custody?

The Rajapaksas are blessed with the most supine and fractured opposition in the history of independent Sri Lanka. Yet even that maladroit opposition is more than the Siblings can tolerate.

The Rajapaksas want to rule all powerful and they want to rule long. For this Dynastic Project to be successful, guns and laws are not enough.

The Ruling Family must retain a modicum of popular support – at least in the short to medium term. Befuddling the Sinhala South into accepting the Rajapaksa-worldview as the only true, real and patriotic one is therefore a must.

The Rajapaksas want the Sinhala-South to think that Sri Lanka is on the verge of becoming the hub of all things great and wonderful.

The Rajapaksas want the Sinhala-South to believe that a country which is planning to destroy key farming lands and its only agricultural college to build superfluous airports can become an agricultural-hub. They want the Sinhala South to believe that a country which cannot conduct an exam or print a text book without colossal errors can become an educational-hub.

The Rajapaksas want the Sinhala-South to regard Sri Lanka as a haven of legality and morality, even though every crime, from murder to child rape, is on the rise.

They want the Sinhala-South to regard Sri Lanka as the next development-miracle, even though the country is struggling with a mountain of debt and evading a financial and forex crisis only by borrowing even more.

The Rajapaksas do not want the Sinhala-South to realise that consumers are being taxed at extortionate rates to fund extravaganzas which pander to the vanity of the rulers and to maintain, in the lap of luxury, a caste of political/personal spongers.

The Rajapaksas do not want the Sinhala-South to see the nexus between economic misery and stratospheric defence costs, between Southern economic woes and the Northern political oppression.

The Rajapaksas want to hoodwink the Sinhala-South into accepting as its own desiderata a polity and an economy of, by and for the Rajapaksas.   Information which contradicts these Rajapaksa Fairy Tales is ‘false and unethical news’; facts which expose these Rajapaksa fantasies are ‘mudslinging’.   So media should not report that 20 percent of Lankan children suffer from malnutrition. Or that at least four rapes are reported daily (with a majority of victims being girls under 16). Or that more and more politicians are resorting to crime, including murder and child molestation (the latest is the UPFA Chairman of the Akuressa PS who allegedly raped a girl of 14 in an inn belonging to him; according to the website ‘Lanka Gossip’ this may not be his first rape).

Or that the people of the North and East continue to experience discrimination, injustice and humiliation. Such information can excite disaffection.

Anything that impedes the Rajapaksa attempts at covering their despotism with a democratic mantle and wrapping their waste and corruption in clean linen will be seen as ‘attempts to overthrow the government’ and dealt with accordingly.

Despots do not have political opponents; they have enemies. For actual/nascent despots, wherever there is democratic dissent or peaceful opposition there is an enemy who must be silenced or destroyed.

For the Ruling Family, elections are not democratic exercises to be won or lost; they are wars of life and death.

The Rajapaksa need to lie and dissemble assumes a critical importance in an election season. The Siblings’ capacity to win elections without recourse to violence and malpractices on a gargantuan scale depends on their ability to hoodwink the Sinhala-South.

The Siblings have become past-masters at discouraging opposition and deterring dissent through selective acts of repression. The killing of Lasantha Wickrematunge is an excellent case in point. Attacks on media and media personnel (from website closures to arrests, abductions and killings) are causing the erosion of media freedom, from within.

The raid on Sri Lanka Mirror and Lanka X News, like the killings in Katuwana, is precisely timed. Its aim is to misuse the law to repress opposition in an election season. That raid was conducted with excessive force and with total indiscrimination. A legal operation was thus magnified into a political spectacle to instil fear in the minds of not only the victims but also of media personnel and political activists in general.

Its aim was to create a ripple-effect, compelling other media outlets and journalists to be more cautious in their reportage, to avoid trouble, to survive. (The story that the website computers contained “evidence concerning an alleged plan to overthrow the government” will exacerbate the fear-factor exponentially.) Incidents such as the website-raid and Katuwana killing send a potent signal that anti-government words and deeds are dangerous, in these election times. They can get you arrested and they can get you killed. Opposition-beware is the message.

The Rajapaksa march away from democracy is incremental, with one despotic measure succeeding another. So the muzzling of Tamil Net was followed by the muzzling of Lanka News Web and the attack on Sirasa was followed by the torching of Lankan e news. Similarly, the assault on Sri Lanka Mirror and Lanka X News is just the beginning. According to the Media Minister “the government (is) in the process of moving against several other websites” (The Island – 3.7.2012).

Once the internet is subjugated, the turn of the electronic and print media will come.