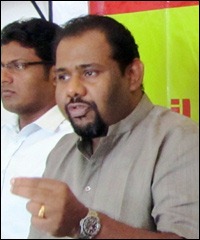 The Tamil National Alliance (TNA) should demonstrate to the world the Tamil rejection of the Provincial Council model of the 13th Amendment by not participating the Eastern Provincial Council (EPC) elections, but it could field a front of independent candidates to meet the political challenge of the times. The candidate list already prepared could go as an independent list with a specific political message on the cause to the people, said Gajendrakumar Ponnampalam of the Tamil National Peoples Front (TNPF), presiding over a press conference in Jaffna on Saturday. The TNPF promised support to the TNA in any such move. In the meantime, former TNA parliamentarian and TELO leader M.K Sivajilingam urged the Sri Lanka Muslim Congress and the TNA to field candidates jointly. It is time for the East to have a Muslim chief minister, who is also elected by Tamils, he told TamilNet on Saturday.

“There is no use of allowing the Sri Lankan government to decide the chief minister for the second time,” Sivajilingam said particularly urging the Muslim grassroots and their political leaders in the SLMC to forge a strategic alliance with the TNA in providing an opportunity for both the communities to sort out their internal issues and healing the wounds of the past.

Meanwhile, there are reports on contentions between the ITAK and the other parties within the TNA on the allocation of number of seats. TULF leader V. Anandasangaree held a meeting with the other parties in Colombo.

Former TNA parliamentarian Sri Kantha said the conflict prevailing within the alliance parties on allocation of seats has to be handled with care by Tamil grassroots to avoid splits.

Suresh Premachandran of the EPRLF and the spokesperson of the TNA told TamilNet that the non-ITAK parties were prepared to resolve the matter of seats amicably within the TNA.

Some former members of the EPRLF and PLOTE have also been brought down from exile by the SL government to compete as independent candidates against the parties that are already part of the TNA, creating confusion among the parties in the TNA.

In Ampaa’rai, Iniyaparathy, a notorious paramilitary operative with legal crime record under SL court system itself in recent times, but serves as SL president’s district advisor, has been selected as a candidate by the Rajapaksa government, the sources in the East said.

The SL government dissolved the Eastern Provincial Council and announced elections two years in advance in the East. But, in the North, the electoral process has been delayed for three years and is expected in 2013.

There is a reason why Colombo that counts on its parallel manipulations of Muslim and Tamil collaborators wants to rush with the PC elections in the East early, and Colombo’s ultimate aim has to be thwarted, said grassroots civil activists and university students in the East, who have been negotiating among the political parties of the TNA to find an amicable equation.

Mr Sampanthan is aware of the trend, but lacks necessary statesmanship to arrive at an equation on the larger interests of the Tamil-speaking peoples in the East, said university students representatives in the East.

Following are the views expressed by the TNPF representatives at the press meet in Jaffna on Saturday:

“TNPF understands that nominations for elections to Eastern Provincial Councils will be soon called for, and that TNA is intending to participate in these elections. We were part of ACTC before the formation of TNPF. Many of our members who supported the TNA withdrew support when TNA was reluctant to reject the 13thAmendment to Sri Lanka constitution.

“We rejected TNA’s approach, which deviated from pre-May 2009 position on the 13th Amendment by compromising on fundamentals.

“From February 2010 we formed the TNPF, and for the last two years we have been trying to reinforce core principles of the Tamil cause by pointing out missteps by the TNA.

“The TNA appears to have dropped the core principles on Self-determination and Tamil nationhood.

“The Provincial Council elections will be a litmus test to verify the stand of the TNA on these core matters. If TNA still upholds the principles of right to self-determination and Tamil sovereignty, then surely TNA cannot willingly participate in the provincial elections that are based on the 13th Amendment.

“In the last Eastern Provincial elections, TNA took a principled stand. It rejected participation in the elections.

“If TNA has reversed its position and participate in the forthcoming elections, that would be confirming our accusations on the TNA relinquishing Tamils aspirations on right to self-determination and Tamil sovereignty.

“Even in this last moment we would want to make this open appeal.

“We again appeal openly that by participating in the provincial elections do not barter off Tamils fundamental rights, and the sacrifices made and losses sustained by thousands of Tamil freedom fighters during the last 60 years which have brought sharp focus of the international community on the Tamil struggle.

“TNA argues that its participation in the elections is purely to prevent other pro-Government parties from obtaining seats in the Provincial Councils.

“If this is the true motivation for TNA’s position, we then say to TNA, please participate in the elections as independent candidates, and not under the TNA which was elected by Tamils to uphold their core fundamental mandate on sovereignty by the Tamil people.

“We reiterate that we will join with you and help you to be successful in this effort. We can draw on the many intellectuals, and those who are held in high esteem by our people to stand in the elections as independents, and thwart pro-Government elements from winning the elections.

“We should put forward the already prepared candidate list as the Independent List, and declare that TNA categorically rejects the provincial elections and explain to the Tamil people the reasons for using the Independent list.

“Further, Sri Lanka’s international propaganda has created an illusion that 13th Amendment can be used as a starting point to reach an acceptable political solution to Tamils.

“The current political climate in Sri Lanka also appears to support this concept. Sri Lanka Government wants to demonstrate to the international community that Tamils accept the 13th Amendment. In addition, the Machiavellian Government also has a compelling need to first engulf, and thereby, constrict and make ineffective, the Tamil national aspirations within the framework of the Unitary State structure.

“With 13 Tamil MPs out of a total of 225 MPs, a working towards a merger in the Parliament is not possible.

“The TNPF started a people struggle against land-grab, and the TNA has performed admirable work in the matter in various areas.

“Holding power in the Provincial Councils may have been a solution to resolve the land-grab cases, if the constitution allows such power to the local councils. But the truth is the 13th Amendment does not even provide these fundamental land powers to the Councils.

“We again plead with the TNA to officially reject the Provincial Councils.

“On the matter of Tamil detainees, Nilaruban’s killing and the sustaining of injuries of other detainees in Vavuniya have further exposed the predicament of Tamils in incarceration.

“It is a treacherous act for any Tamil to accept that the Government’s rehabilitation efforts are being carried out effectively and successfully. Ex-combatants, even after being released, are living under close surveillance and constant monitoring, are living in perpetual fear of being killed or arrested while living in an open prison.”