Tamils Against Genocide (TAG), a non-profit litigation and advocacy group based in the U.S., has pieced together an operational blueprint of Sri Lanka’s White Van abductions, and the complicity of State Institutions. The blueprint is based on affidavits from surviving abductees, a video deposition from an ex-member of Liberation Tigers who was spared execution at the last moment, information revealed from recent capture of white van abductors in the South, and other circumstantial evidence including open death threats issued by Sri Lanka’s Defense Secretary, Gotabhaya Rajapakse. TAG concludes that the white van phenomenon is not a random occurrence of isolated events, but a systemic well-organized criminal enterprise carried out by independently operating cells consisting of criminal gangs and military personnel and activated by directives from high level State officials.

"In their dormant or active status, the persistent and ubiquitous threat of white van networks is the sine qua non of Sri Lanka’s de facto institutionalized culture of impunity. The sustained operability of white van networks, and the culture of impunity they create and within which they operate, are necessary to undermine, if not suspend, the fundamental liberties of free speech, free association, and due process that typically animate active citizenship and meaningful democratic participation," TAG says in the report. 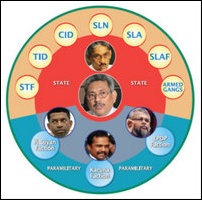 State institutions collude to provide the criminal network wide latitude in the abductions, which is followed by up to four additional phases the victim passes through, if the victim escapes murder, according to the report: 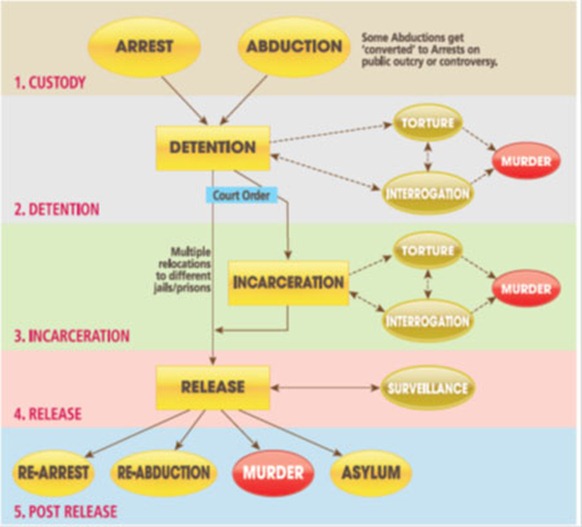 The report provides detailed maps of the detention complexes used in the white van networks, one centered in Colombo, and the other in the South of Colombo.

The video deposition referenced in the report and attached with this story, TAG said, provides corroborating evidence to the white van operations from an demobilized ex-combatant who escaped from the jaws of death from the criminal gang operating under the direction of the command hierarchy. Vadivel Muhunthan, was first targetted for assassination in Jaffna, and later was abducted in Colombo (marked 4 in the Colombo map, GPS: 6°56’33.87" N, 79°51’46.48" E) near Kotahena Government Tamil school in 2009, incarcerated, tortured, released, re-abducted and tortured, and incarcerated again. He escaped from the jaws of death to a European country where he has been granted asylum, according to the deposition.

The report spotlights the basis of the Rajapakse administration’s totalitarian, yet tenuous grip on the militarized republic as being reducible to two factors: Sinhala-Buddhist majoritarianism and state-sponsored white van networks. The report points out that while Sinhala-Buddhist majoritarianism has been a persistent feature abetting post-colonial Sri Lanka’s progressive evisceration of basic Tamil liberties, white van networks emerged during the armed conflict as national security legislation expanded, and continue to operate post-war.

TAG-UK’s Jan Jananayagam told TamilNet, "It is well known that Sri Lanka has long relied on arbitrary arrest, detention without charge, torture and disappearance to suppress dissent. We have now established how the ‘white van’ abduction sequence is an indispensable part of the state machinery used to implement the first stage of ‘disappearances’.

"The machinery of state sponsored disappearances was previously used to instill an atmosphere of fear among the Tamil population and thus control them. It is now also used by the Rajapakses to consolidate regime survival, suppress peaceful dissent and democratic opposition," Ms.Jananayagam added.

Gotabhaya Rajapakse is a dual U.S. and Sri Lankan citizen. While, the U.S. has articulated that upholding human-rights across the world is a priority in U.S.’s foreign policy, Tamil political observers said that it remains to be seen to what level of culpability Sri Lanka’s violations of fundamental rights can rise before U.S.’s threshold for tolerance is breached and U.S. confronts its own citizen’s criminality in issuing death threats openly and his alleged complicity in war-crimes.