Gathering at 10 Downing Street in front of the residence of the British Prime Minister on Monday, Eezham Tamils in the UK remembered the 29th anniversary of the Black July massacre, urging for the expulsion of Sri Lanka from the Commonwealth and for Britain to boycott the CHOGM meeting scheduled to take place in the island next year. “During the 1983 pogrom, the Eezham Tamils could flee to the North as a sanctuary. Now, the extensive land grabs and militarization of the Tamil homeland has made it unsafe for them even in their home. The International Community and especially India should take responsibility for their calculated silence that has allowed this to happen,” Ravi Kumar from the British Tamils Forum (BTF) told TamilNet. 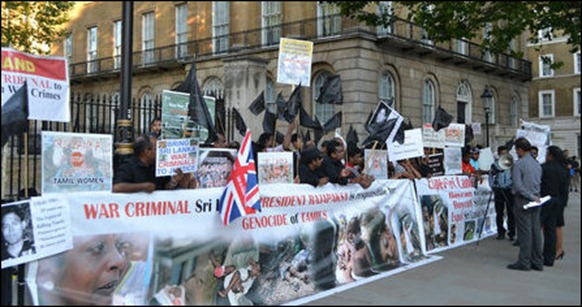 Speaking at the event, Rasiah Jeyarajah from the BTF briefly gave the history of riots, pogroms against the Tamils ever since 1948, calling it a “continuous systematic genocide”. Arguing that Tamils have no freedom of speech and nowhere to settle peacefully in their homeland, he referred to Sinhala colonization, the encroaching of the spaces of Tamil fishermen and farmers, white van abductions and the various threats faced by political prisoners detained without trials.

He further demanded an independent international investigation, an immediate halt to land grabs in the Tamil homeland, and the release of all Tamil political prisoners.

Referring to the refugee crisis created by systematic repression and militarization of the Tamil homeland Jan Jananayagam from TAG-UK said that “Tamil diaspora must demand that Sri Lanka’s key trading partners take some responsibility for the resulting refugee crisis. These trading partners directly or indirectly financed the expansion of the hugely problematic ethnically pure military. They continue to train and equip it.”

“So also must the co-chairs, who oversaw the failed process that has resulted in this mess, take responsibility. They remain engaged in Sri Lanka in multiple ways including trade, military cooperation and sport and must also take responsibility for the refugee flows.”

Speaking to TamilNet, Ms. Jananayagam said: “I think we now have some level of international consensus that the conditions that created Black July are very much still alive. The question then is how we can ensure that international mechanisms such as R2P are able to cope with future eruptions of similar violence.”

The event was organized by the British Tamils’ Forum.