While more than 2,000 war-affected families are struggling without lands in Karaithu’raip-pattu division of Mullaiththeevu district, Sri Lankan minister of Trade, Rishard Badurdeen, has planned to appropriate 1,500 acres of forest land along Mu’l’liyava’lai – Nedungkea’ni Road promising the lands to his supporters from elsewhere in the island, sources at Karaithu’raippattu divisional secretariat told TamilNet. Even the occupying SLA had opposed the move, but the SL minister has exerted pressure from the top to implement his plan, the sources further said. In the meantime, protests against the SL minister, who is blamed for violent attack on the court complex in Mannaar is being stepped up by the lawyers, who have also protested against the attack on the residence of Point Pedro District Judge on Wednesday.

The Divisional Secretary of Karaithu’raip-pattu has received a ‘personal offer’ from the notorious SL minister that he was prepared to share 50% of the sales from the sales of the trees to be felled in the lands with the divisional secretary.

The divisional secretary has already sold the trees from a 500 acre land which was given to a Sinhala businessman from the south of the island for sand scooping, civil officials in Mullaiththeevu told TamilNet.

The officials also said Tamil civil officials who get trapped by their wrongdoings are deployed by the SL ministers and the officials of the occupying SL military in their programme of committing structural genocide on the country of Eezham Tamils.

The SL minister has provided most of the land plots in Karaithu’raippattu to rich businessmen outside Vanni, informed sources said, adding that only some of the lands are to be given to resettling Muslims.

Muslims had been living in Neeraavip-piddi and Kichchaapuram before they were evicted by the LTTE in 1990. Most of them have now returned to their villages.

The SL minister has been engaged in strengthening his voter-base creating divisions among the resettling people in Mannaar and Mullaiththeevu districts.

Lawyers and legal activists in South have also engaged in protests expressing solidarity with the judges and lawyers in North.

The protesting legal activists, who gathered at the premises of Jaffna Court also voiced against the recent attack on the house of Point Pedro District Judge Srinithy Nandasekaran.

SL military intelligence operatives are believed to be behind the attack on Wednesday night.

Kanakalingam Kesavan, the secretary of Jaffna Lawyers Association, on Friday said that the association has passed a resolution against SL Minister Rishard Badurdeen’s phone threat to Mannaar Judge and against the attack on Srinithy’s official residence. He also said that the lawyers would continue to boycott their work demanding action on SL minister Rishard Badurdeen. 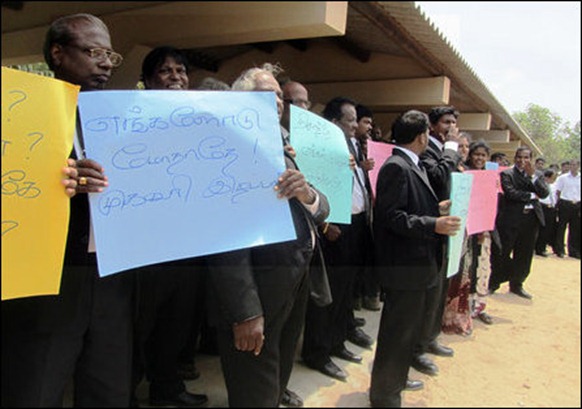 Lawyers in Jaffna protest against SL Minister Rishard Badurdeen’s phone threat and against the attack on the residence of Point Pedro District Judge.