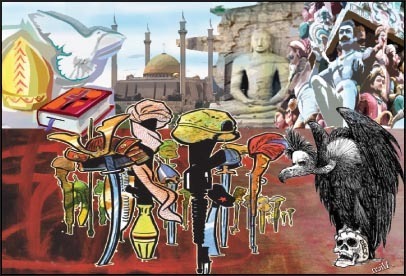 A concoction of toxic myths and noxious perceptions created the soil from which the horror that was Black July sprang into bloody life 29 years ago.

There was the perception that Tamils, Muslims and Christians are essentially unreliable and untrustworthy, that they are a perennial ‘fifth column’ which must be kept on a very short leash.

The confluence of these myths and perceptions created a ‘Clash of Civilisations’ version of history which reduced the past, present and future of the island to a long war between its majority-owners and minority-interlopers.

When history becomes an ‘us vs. them’ Manichean drama, it renders unacceptable, ipso facto, any demand by any minority for justice and equality, because non-owners of a country do not have any inalienable rights. It also prevents the majority from accepting the possibility of minority grievances, let alone understanding them. And it labels any attempt to resolve minority issues as rank betrayal.

Sinhalese and Tamils coexisted in this small island for millennia. But the Mahawamsa-inspired history focuses on the shorter episodes of conflict with such virulent single-mindedness, that it effectively effaces the far longer periods of mutually tolerant coexistence. It is this history as ‘Sinhala vs. Tamil war for Lebensraum’ children learn in schools, and in homes, a history filled with imagery of carnage and destruction, glorified in the name of patriotism.

The history of Sinhala-Muslim relations is presented in an even more distorted form. Islam was brought to Lanka by traders and the island never faced a Muslim invasion.

The British policy of divide-and-rule was applied to Sinhalese and Tamils and not to Muslims. And yet, the first racial riot in Ceylon targeted Muslims who were not demanding a separate state or even political rights – proof positive that the ‘us vs. them’ version of history can cause outbursts of bloody intolerance, even without the excuse of separatism.

This Manichean version of history led to ‘Sinhala Only’; it was, is and will be a mammoth politico-psychological obstacle to a political solution to the ethnic problem.

It also provides an unfailing-justification for majority assaults on any minority seen as too assertive or successful, too demanding or intrusive, by covering such outbursts with the cloak of patriotism – as in July 1983.

The perpetrators of Black July were not just thugs, or UNPers. Ordinary law-abiding citizens of all political hues and none actively participated in the horror while a far greater number of ordinary, law-abiding citizens looked on with approbation or indifference or (occasionally) shame. The active participants could not have destroyed, burnt and killed, and the approving spectators nodded assent, day in day out, for almost a fortnight, if they were not fortified by the belief that they were warriors in a just war.

Without the amoral strength and irrational justification provided by the belief that the alien Tamils must be stopped from destroying Sinhala Sri Lanka, the fires of Black July may not have burnt so infernally and for so long. Or left behind, not ashes of shameful repentance, but embers of angry aggressiveness.

As the Mahawamsa clearly implies an atrocity becomes a virtue when committed against ‘unbelievers’ for the protection of the true faith and its sole refuge.

This mindset was at the centre of many an abomination, not just 29 years ago, but even in the recent past; such as the incarceration of around 300,000 civilian Tamils in open prison camps masquerading as ‘welfare villages’. Instead of encouraging the innate kindness and generosity of ordinary Sinhalese to come to the fore, instead of allowing ordinary Sinhalese to feel compassion for the plight of ordinary Tamils and to reach out to them in solidarity and fellow-feeling, the South was told that Tamils in their camps were safe, happy and lacked for nothing (plus that no civilian Tamil died in the war). So the Sinhalese celebrated; and descended on the North en masse as pilgrims and pleasure seekers, blind to the destruction and destitution around them, while the Tamils festered in terrified and resentful silence in shattered homes and barbed-wire camps.

The same Manichean mindset which led post-independent Lanka into a brutal war is now poisoning the peace and driving the search for other enemies to replace the beaten Tamils.

And in the attempts to stereotype and demonise the Muslims, one can hear the distant echoes of the words which enabled Black July.

They are almost the same words used against Tamils in the years preceding Black July: unpatriotic, encroaching, taking our land and dominating our economy…

Religious-racism is as blindly inane as ethnic-racism. In the emerging attempts to subsume all Muslims under the fundamentalist-hijab, the courageous voices of moderate Muslims are lost – such as the article by a Lankan born Muslim scholar, Dr. Ameer Ali  (http://www.colombotelegraph.com/index.php/prophet-not-perfect-says-sri-lankan-islamic-scholar/). Just as Black July and its unrepentant aftermath enabled Vellupillai Pirapaharan to decimate Tamil moderates and dominate Tamil polity and society, attacks on Muslims by Sinhala-Buddhist extremists will strengthen fundamentalist Muslims at the expense of moderates, to the detriment of all concerned, not least the Muslims themselves.

An Alliance of Moderates

As Hannah Arendt points out in ‘The Banality of Evil’ there is a fundamental similarity between opposing fundamentalisms. Ethnic-racists refuse to share power with other ethnicities. Religious-racists agree that life and society should be reordered in accordance with religion, the only difference being whose religion. Both oppose the secular humanist values of Radical Enlightenment, including universal human rights and pluralist democracy.

Intolerance and extremism are not the sole properties of one race or one religion. The ‘reflex of despair’ (Hobsbawm) generated by violence and injustice encourages the victims to become violent and unjust. Sinhala intolerance and extremism gave birth to Tamil intolerance and extremism personified by the Tigers, who subjected the Tamils to a worse tyranny than ever by the Sinhalese and followed a policy of religious cleansing vis-à-vis the Muslims. There are reports of fundamentalist Islamic groups violently attacking other Muslims whose interpretation of the Koran is different from theirs. In the recent past we witnessed two incidents of Buddhist-on-Buddhist violence.

Unless these internal demons can be defeated, Sinhalese, Tamils, Muslims, Buddhists and Christians will continue to be the victims of their own aggression, in a ‘war of all against all’.

Politicians often appeal to the demon of intolerance in the national-psyche, in the hope of harnessing its power.

The long Lankan tragedy is a result of the outstanding success of such appeals, and the inability of moderates of all ethnicities and religions to resist them. Black July was the most horrendous symbol of that monumental failure.

Can the moderates do better this time?

Will Sinhala-Buddhists learn that Sri Lanka can be saved from disintegration only if the polity accepts pluralist democracy (including devolution) and society is cleansed of the ethno-religious racist seeds which gave birth to Black July?