After laying foundation for the transformation of colonial Ceylon into genocidal Sri Lanka, and after playing an articulated role in the US-India architected genocidal war against Eezham Tamils, citing in the UN that the LTTE was “long blighting” State in the island, a particular section of the UK parliamentarians steadily buttress the Sinhala State, accused Tamil political activists in Jaffna, calling a statement made by the visiting 9-member team of UK parliamentarians in Jaffna last Thursday as absurd. The team, mainly of Conservative members, told media in Jaffna that Tamils should settle matters internally and should not seek international solutions. Liam Fox’s genes stealthily continue in the UK parliament to perpetuate genocidal Colombo by disguising subjugation as internal solution after waging a war internationally, the activists said. 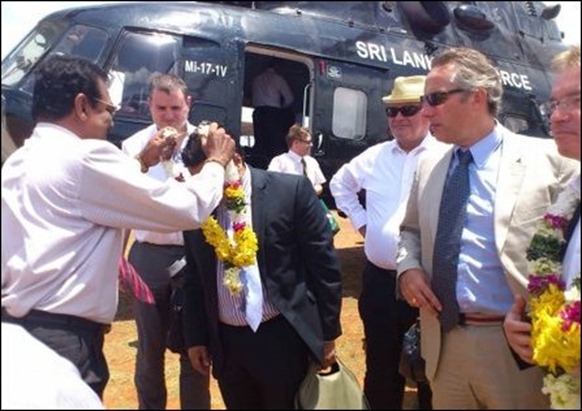 In recent times, batch after batch of UK parliamentarians visit the island and Jaffna. They come as pampered guests of the Rajapaksa regime. SL government outfits invite them. After every visit they steadily make statements to buttress the genocidal state and regime in the island. They lie to the world outside and try to blunt the international struggle of Eezham Tamils, commented some members of the Jaffna Chamber of Commerce.

Whatever their orientation may be, when we met them we tried to brief them of the true situation. We tried to convince them that development doesn’t mean the A9 Highway, said a member of the Chamber.

The UK team of 8 Conservative parliamentarians and one DUP member from North Ireland, led by James Wharton, Conservative MP for Stockton South, met Rajapaksa at his Kandy residence before visiting Jaffna, Ki’linochchi, the East and other parts of the island.

The following were the members visited Jaffna:

Unconfirmed reports said that the team arriving in Jaffna by an SL Air Force flight met officials of the occupying Sinhala Army at Palaali.

Later, reaching the Jaffna Central College grounds by SL military helicopter, they were made to wait inside the helicopter for half an hour, as there was no one to receive them due to clumsy arrangements. Mr. Sundaram Arumainayakam, SL Government Agent In Jaffna who rushed to the scene received them and made arrangements for their transportation.

The team went to see the unfinished housing scheme at Ariyaalai, which was started by New Delhi and was left in an ugly state. It was there the team told media not to expect outside solutions but to find internal ones.

The UK government, tagged behind the US, is engaged in a number of situations across the world in finding international solutions ranging from diplomatic positioning to the extent of directly waging war.

In the last more than 60 years since it handed over power to a Sinhala state in the island, the UK has neither acknowledged the genocide taking place in the island nor stood for solutions appropriate to chronic national questions.

After abetting the genocidal war, the UK government was actively involved in a ‘rehabilitation’ programme that left the former liberation fighters of Eezham Tamils to undergo all kinds of humiliation in the hands of the occupying Sinhala military.

The Conservative team’s statement denying international justice has caused much anger in Jaffna.

The diaspora Tamils in the UK, especially those who are tagged behind the different political parties, have a lot of homework to do, more than staging demonstrations to Rajapaksa. The elements to be addressed by the struggle are very much inside the UK, the activists in Jaffna said. 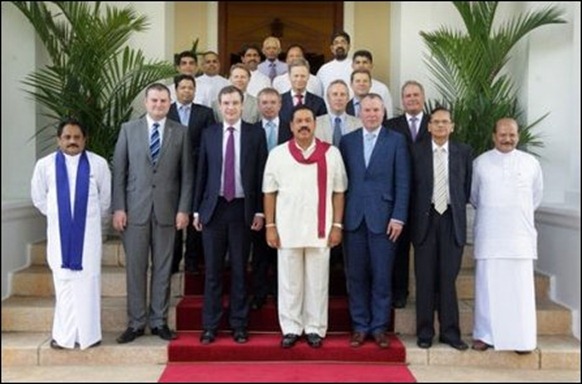