By officially announcing a ban on the word “Eezham,” New Delhi establishment’s Ministry of External Affairs (MEA) infringes into the historical and cultural identity of a people outside of its jurisdiction, accused Eezham Tamil civil groups in the island and in the diaspora, responding to an official instruction of the MEA dated 9 August 2012, sent to TESO organisers in Chennai that “Eelam may be dropped from the title of the conference” for MEA clearance of approval. Whether New Delhi has already started thinking that the island is part of its empire and the Eezham Tamils are its ‘conquered’ people to impose orders on the identity of another people, asked the enraged civil activists. Meanwhile, New Delhi’s foreign missions sabotage giving visa to Eezham Tamils attending the TESO conference, news sources from several countries said.

The title of the conference of the Tamil Eelam Supporter’s Organization (TESO) scheduled to start on 12 August, is “Eelam Tamil Rights Protection Conference.”

“This Ministry has no objection from political angle, for the proposed International Conference, with foreign participants, with the proviso that “Eelam” may be dropped from the title of the conference, and subject to clearance of Ministry of Home Affairs and other competent authorities,” the clearance document from New Delhi’s MEA said.

Eezham Tamil is the cultural and historical identity of a people. It is not even a term of a country as such Tamil Eelam, for which a struggle is being waged for decades. What is the authority of the MEA in New Delhi to order for the deletion of a term of identity that was in use for centuries before anyone has ever heard the term India, asked Eezham Tamil civil activists.

The MEA clearance was sought, as it was demanded by New Delhi establishment’s foreign missions from the Eezham Tamil visa applicants who had been invited by the TESO organizers.

The clearance for foreign participants for the 12th August conference was issued only on the 9th, and that too with hitches such as further clearance from the Home Ministry as well as ‘other competent authorities’, meaning probably the intelligence outfits.

Citing the hitches, the Indian missions have not issued visa to a number of participants.

As there is going to be a weekend, the Indian missions will have a convenient excuse to sabotage the TESO conference by not issuing visa to foreign participants.

On one hand, the Eezham Tamils in the island are gagged by the constitution of the genocidal state from openly coming out with their opinion on the solution they want, and on the other hand, the New Delhi establishment now officially interferes into the rights of the Eezham Tamils as well as Tamils in Tamil Nadu, even from uttering a word of identity, Tamil civil activists in the island said.

New Delhi did it covertly when Mr. Karunanidhi convened a meeting two years back, to remove the word Eezham from a conference banner. But now it comes out openly, they commented further. 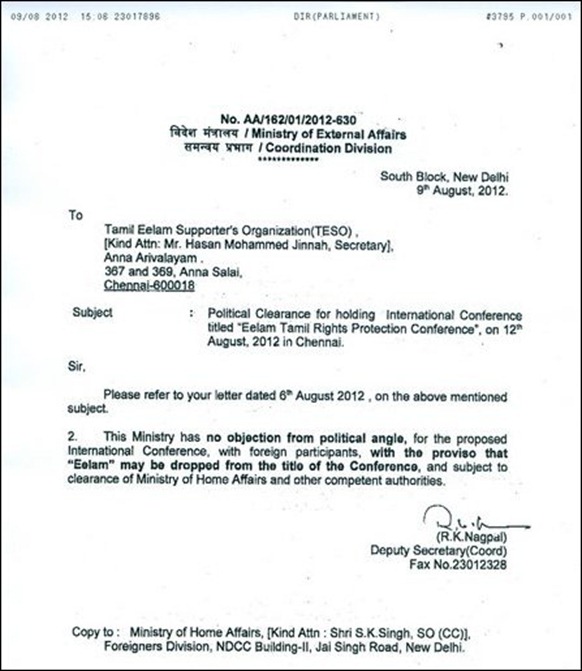