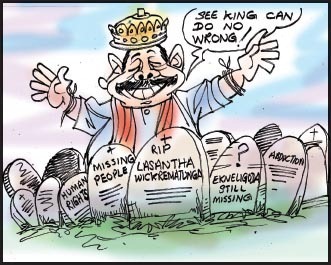 The Editors’ Guild and some other powerful associations of journalists have got hot under the collar over the statement of the new Secretary to the Media Ministry Charitha Herath that the government wouldn’t be introducing the Right to Information Act in the interests of national security and other sensitive matters.

The ire of the editors and others who have promptly issued a heated communiqué expressing regret over the Secretary’s  statement itself betray their woeful lack of understanding not only of government policy – ‘Mahinda Chintanaya’ but basic Sri Lankan disinclinations.

That is what our rulers had learned, remembered and acted upon accordingly when these journalists tried to smuggle in the legislation. Our leaders must be having a pretty good idea of how they look in the sixty to seventy year-old birthday suits with decades of misdemeanours to hide.

What does national security involve? Security of the nation – military plans, number of terrorists arrested but jailed and not produced before courts, etc. The war is over, so who cares about military plans? And what of terrorists arrested? Only India is concerned and they can be conned off as usual. Besides are our leaders really scared about revealing matters on national security and sensitive matters officially or unofficially?

The answer is simply: ‘No’ – Just deny any damn thing. Those busy bodies like the UN Secretary General, President and Secretary of Foreign Affairs of America may ask questions. We only say: This is an internal affair on which you have no right to ask questions as specified in the Charter of the United Nations itself and don’t violate our national sovereignty. All that is old hat now.

If so, why are we not enacting the Right to Information Act?

That is because national security has wider connotations than the security of the nation. It involves the political and financial security and moral integrity of our rulers and their family affairs. For example questions can be asked on how many accompanied the President on his trip to the United Nations and how many contributed in any way to the success or the failure of the mission?

How many booked into the rooms of the Waldorf Astoria and what was the cost of each room? The answers provided under the R2I (Right to Information Act) would be pretty embarrassing. There are questions about a wrist watch of the President’s ‘machang’ which was lost and found?

These rude newspaper persons were asking rude questions from officials about the watch but only The Sunday Leader reported it.  What of that much celebrated dog from Switzerland? Such questions infringe on the national integrity of leaders who fly off their handle when asked pertinent questions – not national security.

There are other questions concerning the public. What happens to the thousands who lost their life savings by investing in companies of Lalith Kotelawala? Are there no charges to be made against him? Where is Cecil Kotelawala? If the elusive KP, the LTTE finance wizard could be found, what is the difficulty in finding dear Cecil? Has compensation been paid to depositors and how many have died of agony having lost their lifetime savings? Meanwhile does KP, the LTTE financial wheeler dealer, not have a clue about billions of dollars in LTTE funds? Is he a prisoner or a state guest?  He is reported to be engaged in political work in the North. Why can’t his statements on LTTE funding be released now that the LTTE is no more and thus this can not be a state secret?

How did the Sri Lanka Cricket Board which was a top money spinner a decade ago now finding it difficult to pay even their employees?

Who is to pay for the million dollar hedging deals done by clueless directors of the Petroleum Corporation at great loss to the Corporation and the country? Who is importing contaminated fuel?

Who is responsible for the Z score mess up and the attack on the Mannar courts?

Is anybody responsible for anything in this ‘Miracle of Asia?’

There are other questions which journalists should pursue with vigour but seem to have forgotten despite occasionally pinching the Rajapaksas to demonstrate their independence but writing almost daily about the glorious Rajapaksas who saved this country from terrorism and without whom this country would not have survived.

Have the journalist associations forgotten about the grotesque murders of Lasantha Wickrematunga and Sivaram and the disappearance of Prageeth Eknaligoda? Scarcely a word is mentioned these days about the state of the investigations of these crimes save for an occasional statement by a police spokesman saying that ‘investigations are continuing’. Almost nothing is heard of journalists who had disappeared in the North. The King can do no wrong

Most of the instances we have mentioned above have been written about on and off in some newspapers and is now to be put into limbo. Even if answers are provided to questions sought under the R2I (if enacted)  they will be bland and disingenuous. If the Secretary General of the UN, President of the United States and its Secretary of State for Foreign Affairs and the Indian government can be put off why would Sri Lankan journalists who can’t get rid of their teflon smiles at Temple Trees, succeed? The Rajapaksas have now developed a thick skin and even if any damning accusation is made they simply don’t seem to care.

The fundamental flaw in the thinking of those seeking answers to questions which are not responded to is the basic flaw in governance today. The age old maxim of English law: Rex non potest peccare – the King can do no wrong – has been revived and is in full force in Sri Lanka. Most of the so called independent and ‘fearless’ media with much sophistication ignores this horrendous development and attempts to show its aggressiveness by occasionally pinching the great deceivers slightly.