I finally went to Chennai and participated in Tamil Elam Supporters Organization (TESO) conference and the public meeting. The whole thing was effective in raising the plight of the Elam Tamils. Even for a Marxist revolutionary there was a space to intervene with out conceding any principle. Though near 90 years of age, DMK leader Karunanidi, is very alert and active. From a wheelchair he was guiding the whole operation; keenly following the entire discussion. His son Stalin led the organizing of the event. He reminded me of late Vijaya, handsome and charming. Obviously it was a bourgeoisie event.

Role of the DMK 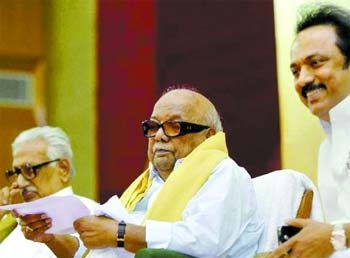 I felt they urgently needed to pacify the masses looking towards them. There is dissatisfaction about the role the DMK played during the war that was supported by  Sonia Gandhi. They had to come out and condemn the genocidal attack on the Tamil people and show a path to go forward. They were determined to mobilize masses and voice the misery of the Lankan Tamil people. This opened the door for NSSP to participate. The government and Jayalalitha tried every trick to stop the mobilization of the people. They tried to limit it to a hotel room discussion, away from the masses. Police orders, court orders and security warnings were given one after the other. Stalin led the battle for freedom of expression and finally both the conference in the morning and the rally in the afternoon were successful.

As expected the draft resolutions document was a liberal appeal to the Indian leaders and to the UN. But it sharply condemned the war, the continuation of military rule and the oppression. Also it condemned plunder of the Tamil homeland under the pretext of development. Actual recommendations were similar to that of the LLRC. I pointed out that both the Indian leaders and global powers were foremost supporters of the war of Mahinda and still supporting him, in the present development programme. In that scenario we need to go beyond the formality of appealing to the imperialist masters. We must go to the masses and appeal to the oppressed in the world to incorporate the demands of the Elam Tamils among their items of struggle. Also, I explained that we are already giving a battle to the repressive Mahinda regime as the protest of the opposition, the Vipakshaye Virodaya. In the VV all are agreed to campaigning for the implementation of the LLRC recommendations and also to press the government, to call a parliamentary select committee, to discus the Acton Plan for implementing these recommendations.

They said they are not against that and in fact the evening event is a beginning of mass activation. Further more I explained that Sinhalisation is only a populist pretext for grabbing the resources and land of the Tamil people, to sell these to alien economic powers, basically multinational corporations. Poor peasants and fishers of the Sinhala community have not gained any thing from this war. On the contrary they also lost their kith and kin, and are now enslaved by the new agreements with the international money lenders.

The evening event was a massive mass mobilization. It was a resounding defeat for those who wanted it to be a flop. Some said it was seventy thousand; almost all agreed it was more than 30,000. From 4 pm until 9pm they were there, listening and cheering. I was amazed that so many understood speeches made in English. They listened silently to my speech. I explained the miserable situation in the country. Now, not only in the north but also in the south people are fed up with Mahinda regime. Struggles of workers, peasants, fishers and students are continuing. Government has reacted by launching repression which killed workers and fishers. The agitations of the VV, protest of the opposition, have been successful. Our campaigns for the implementation of the LLRC RECOMMENDATIONS have a serious effect on both the government and the civil society. In this scenario the government leaders rest on their foreign masters. Role of India is crucial. If TESO can mobilize in this manner, not only in Tamil Nadu but also in other parts of India as well as internationally, that could change the political parameters in Lankan society.