“The Sri Lankan conflict is now a transnational war against the Tamil diaspora that enables the continued political repression of political aspirations both in Sri Lanka and abroad,” writes Dr. Vicki Sentas in a chapter published in a recently released book “Counter-Terrorism and state political violence: The ‘war on terror’ as terror”. Dr. Sentas, currently a lecturer in Law, University of New South Wales, Sydney further opines in the chapter titled “One more successful war? Tamil diaspora and counter-terrorism after the LTTE” that the criminalization of political aspirations of the Tamil diaspora and proscription of Tamil organizations only strengthens the cause of the genocide accused Sri Lankan.

“Sri Lanka’s state violence was perpetrated under the guise of counterterrorism, with the explicit support of western powers for its military campaign against the LTTE,” she writes, contending that the argument of global counterterrorism is still used to continue the war on the Tamil people, also bringing the Tamil diaspora in its ambit, in an attempt to destroy Tamil nationalist aspirations both in the homeland and abroad.

Criticizing the “counter-insurgency view of violence as incipient in ethno-political identity” in the west, including that of those organizations like ICG, Dr. Sentas notes the fallout of the ban on the LTTE in the west resulted in the criminalization of the diaspora owing to the open-endedness of such penalization of organizations.

“No actual involvement in or conspiracy to commit acts of harm within the proscribing state, or anywhere else, is required to constitute an offence. The offences do not penalise actions at all, but rather relations and connections, both material and affective.” 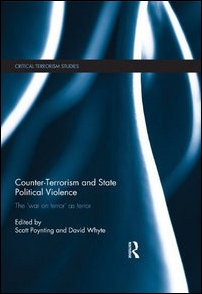 The necessity to criminalize the diaspora as such is even more imperative now for the Sri Lankan government to successfully “consolidate victory over the idea of political self-determination for the Tamils”, since the Eezham Tamils in the island are gagged owing to the anti-democratic penal laws in Sri Lanka that prohibit them from explicitly speaking about self-determination. The scholar further notes that even the demand for Tamil Eelam is taken as extremist.

So while a structural, protracted genocide proceeds in the Tamil homeland, the war on the diaspora is waged, as Dr. Sentas has observed, through proscriptions of Tamil organizations, arm-twisting Tamils to drop demands for sovereignty, and by thrusting solutions within a unitary Sri Lanka on the Tamils.

“In targeting collective Tamil political identity, the global proscription regime is an institutional, structural violence which criminalises diaspora politics and affective connections to the idea of Tamil Eelam,” Dr. Sentas concludes,’ arguing that this atmosphere aiding Sri Lanka’s war on the diaspora also facilitates continued repressions of political freedoms in the island.

“Counter-Terrorism and state political violence: The ‘war on terror’ as terror”, edited by Scott Poynting and David Whyte is available on Routledge publications. The collection of articles on the political and social impacts of counterterrorism includes contributions of Noam Chomsky and John Pilger.