53 Eezham Tamil boat refugees, seeking asylum in Australia but driven to Indonesia, are on a fast-unto-death protest on-board their vessel for the past four days, against the decision of the Indonesian authorities to hand them over to Sri Lanka Navy. The refugees claim that they will be persecuted, even killed, if handed over to the SL Navy. On Tuesday, they sent SOS messages to their families, relatives and journalists in the island to urge the international human rights groups to address their plight. A university student representative in Jaffna confirmed that there were genuine refugees needing international protection in the boat. The refugees heading for Christmas Island of Australia were taken to Indonesia on 28 August by that country’s navy after their boat ran out of fuel in mid sea.

After a dangerous travel on seas for 20 days, their health is steadily deteriorating over the hunger strike and casualties are feared if appropriate action is not taken, sources informed. Among the asylum seekers are 2 disabled persons, 4 women and 3 children.

In the meantime, a spokesman for the refugees in the boat has told reporters in Jaffna and Colombo through a phone conversation that they had started off from a dock near Chennai on 09 August 2012. According to his statement, the boat ran out of fuel on 19 August.

After being provided with 100 litres of fuel by friendly fishermen in the mid-sea, they were able to travel till 28 August when they again ran out of fuel, the spokesman told journalists in the island.

Following this, they were driven by the wind towards waters of Indonesia and were taken by the Indonesian navy to a port on the west coast, he added.

Hearing decision of authorities to deport them to Sri Lanka, the refugees began a fast-unto-death, on-board the vessel, claiming that they would be persecuted or killed in the island. They pleaded for 2000 litres of fuel that would suffice them to reach Christmas Island, Australia.

Separately, another group of 43 asylum seekers from the island have been detained at the Mentawai Island, 9 days after their boat’s engine broke. This group too is reported to be having women and children.

Meanwhile, a message with photos from an unverified source, claiming to be ‘Friska Simamora from Mentawai, attached to GKPM church Radio Station,’ also states that there are two boats, “one that has got engine trouble and the other which has ran out of fuel”. The photos originating from this source have been provided below without verification. 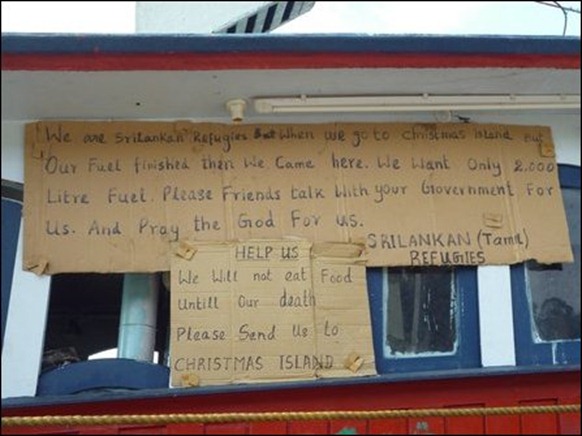 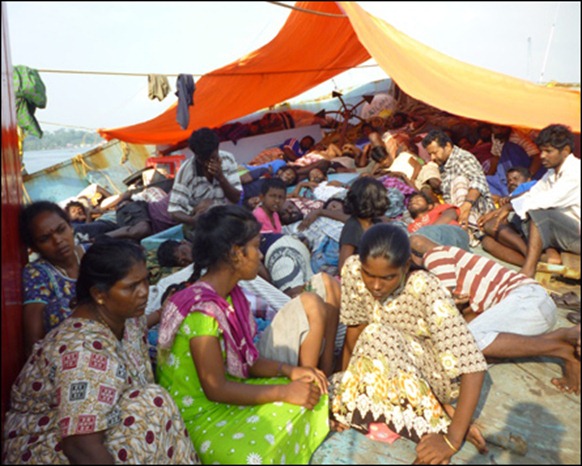 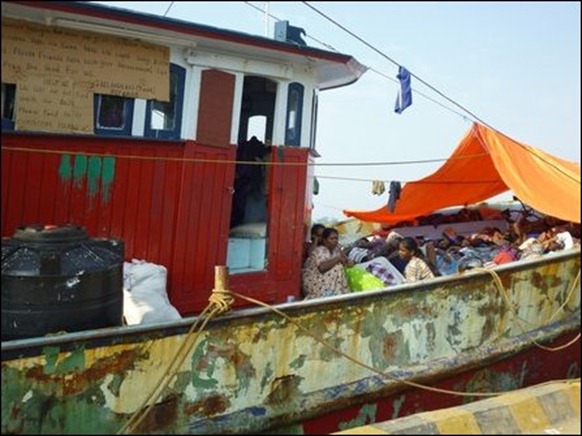