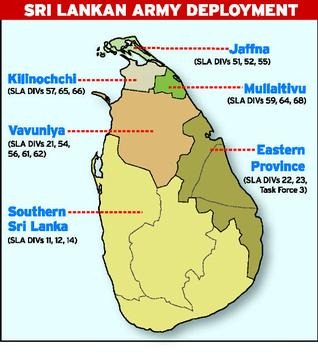 More than three years after winning the war against the LTTE, the Sri Lankan Army retains an overwhelming presence in the North and East of the island, deploying 16 out of its 19 divisions in the Tamil-dominated regions.

The information, from an internal Sri Lankan military document showing the deployment in a series of maps for a PowerPoint presentation, is for the month of June 2012, but there have been no significant changes since then.

A former Indian Army officer, Colonel (retd.) R. Hariharan, who was with the Indian Peace Keeping Force (IPKF) in Sri Lanka, and with whom The Hindu shared the information for an assessment, said the manner in which the troops were spread out in the entire North and East was suggestive more of an Army in ‘operational readiness’ than in post-conflict repose.

The colour-coded maps show the wide spread of the battalions that make up each brigade in every division. The document does not mention the exact numbers of soldiers, and any estimate of numbers of troops has to be based on what is known about the Sri Lankan Army’s divisional strength.

A Sri Lankan division is smaller than that of most other armies, and has between 6,000 and 7,000 soldiers. Taking the lower number, that would mean that 85,000-86,000 soldiers are at present in the North and East. This number does not include the separate deployment of a Task Force in the East, and of the Navy and the Air Force.

The continued military presence in Tamil areas is viewed as hampering post-conflict ethnic reconciliation. The Army is entirely Sinhalese, and the people of the North are almost entirely Tamil.

India may raise the issue during President Mahinda Rajapaksa’s September 20-21 visit to India. The Sri Lankan President will meet Prime Minister Manmohan Singh on Thursday and will also call on President Pranab Mukherjee.

Sri Lanka has defended its right to deploy its Army where it chooses within its boundaries and stressed that these decisions were based on national security assessments.

In a recent interview to an Indian newspaper, Mr. Rajapaksa said that for a country recovering from three decades of armed conflict, there had been a steady progress in troop withdrawal from northern Sri Lanka, but keeping the military there was also a measure of abundant caution against the reactivation of militancy in the region.

He also said troops were necessary for “development work” in the northern Sri Lanka. But it is precisely the role of the Army in “developing” the North and the East that is seen as a matter of concern.

Ahilan Kadirgamar, a democracy activist in Sri Lanka, told The Hindu that the army’s role in civil administration in the North and the East was a matter of concern, but could not be separated from the militarisation of Sri Lanka in the post-war years.

“Sri Lanka, as a whole, needs a debate on demilitarisation and a change in the role of the military in the governance of the country for the situation in the war- affected regions to return to normalcy,” he said.

The de-militarisation of the North and the East is one of the benchmarks against which Sri Lanka’s compliance with the United Nations Human Right Council resolution will be assessed.

The March 2012 Human Right Council (HRC) resolution requires Sri Lanka to implement the recommendations of its own Lesson Learnt and Reconciliation Commission’s report. One of the LLRC’s key recommendations was that the government must significantly reduce military presence in the North and the East.

There had been several depositions to the Commission that the military was a parallel authority in the region, more powerful than the civilian administration. The commission heard that though the military’s help in development activities, like road-building, had been useful, their continued presence was a source of constant insecurity to the local people.

The military’s occupation of private lands that were converted to High Security Zones during the decades of war has prevented resettlement of the original owners.

India is in the chair of the troika appointed by the Council to assess Sri Lanka’s progress in the resolution’s requirements. Spain and Benin are the other two countries. The troika is to liaise with Sri Lanka and write a report that will be debated at the review sessions in Geneva in the first week of November this year.

While Mr. Rajapaksa has had recent meetings with Dr. Singh on the sidelines of the NAM and Rio Summits, the two leaders are expected to hold substantive discussions for the first time since the President’s visit to New Delhi in June 2010.

In these two years, the atmospherics have changed. An Indian official said the relations between the two countries were “intense” and require “management.”

Several irritants have crept into the friendly ties over the past three years. For India, these would include what is seen by New Delhi as foot-dragging by the Rajapaksa government over resolving the Tamil question, and the perceived close relations between Sri Lanka and China.

For Sri Lanka, what rankled most was India’s support for the HRC resolution, which pulled up the Rajapakasa government for its failure to address human rights violations and other issues arising out of the final battle against the LTTE in May 2009; and, since then, the rising anti-Sri Lanka sentiment in Tamil Nadu, culminating recently in an attack on pilgrims.

New Delhi sees Colombo’s subsequent advisory to its nationals against travelling in Tamil Nadu as an “over-reaction.”

Sources in the Indian government said all these issues would likely come up for discussion at the meeting between Dr. Singh and Mr. Rajapaksa.

On a political settlement of the Tamil issue, India has been emphasising the need to demilitarise Sri Lanka’s North and East and hold provincial council elections in the North as early as possible so as to hand over governance to elected civilians.