Tamil politicians and civil activists on Wednesday protested condemning the brutal attack Sunday on Paramsothy Vasanthakumar, the elected chairman of Nalloor Piratheasa Chapai (PS). Vasanthakumar was on his way to prepare a legal suit after lodging a formal complaint against the illegal SL military occupation of 5 acres of land belonging to the civic body when he was attacked. The attackers, alleged to be the operatives of the SL military intelligence, had followed Mr Vasanthakumar in motorbikes, assaulted him using sharp iron rods at Kokkuvil and forcibly removed the legal documents on the SL military occupied land together with a sum of money. The protestors on Wednesday openly blamed the SL military intelligence in Jaffna for carrying out a systematic campaign of terror, targeting elected civic leaders in the peninsula.

The protestors repeatedly shouted ‘Go Home, Military’ on Wednesday during the protest.

The vice chairman of the Nalloor Piratheasa Chapai, Ms Komathy, said several civic leaders have been subjected to attacks and almost all the activities undertaken to improve the welfare of the people are getting blocked. She urged the global community to come forward to ensure the freedom of Tamils. They are not even allowed to open a children’s park in their own land, Komathy said.

Addressing the protestors, former TNA MP and a political leader of TELO, Mr MK Sivajilingam, said the military land grab taking place and the prevailing threat against all civil protests only strengthened the argument that there should be an international investigation on the question of Tamil genocide and the genocidal onslaught that had taken place in Vanni claiming more than 40,000 lives of Tamil civilians.

TNA parliamentarian Mr Sritharan, in his speech, explained the nature of Sri Lankan military occupation prevailing in the historic Tamil homeland where Eezham Tamils are denied of their nationhood and the so-called democratic Sri Lanka of Mahinda Chintana is attacking even the grassroots level civic leaders of Eezham Tamils.

Addressing the protest, another TNA MP, E. Saravanpavan, blamed the Sri Lanka military intelligence for the attacks on civic leaders in Jaffna.

Mr Vasanthakumar, a retired village officer (GS) and an elected representative of the TNA, the ruling party of the Nalloor civic body, narrowly escaped death on Sunday after being attacked, and was admitted to the Jaffna Teaching Hospital with serious injuries.

The attackers were wearing black helmets with tinted glass covering their faces, according to Mr Vasanthakumar.

The latest attack is reported in the wake of a series of harassments and threats posed by the intelligence operatives of the occupying SL military at various places in the peninsula, TNA representatives, who took part in the protest told TamilNet.

The civic representatives also complained that only two TNA parliamentarians were present at the protest.

The campaign of terror is being waged by the SL military intelligence against the civic representatives after the elected civic bodies in the peninsula jointly resolved to oppose the illegal occupation of the lands by the SL military.

Mr Vasanthakumar was targeted while he was on his way from the Jaffna Police to his attorney to prepare a legal suit against the SL military occupying the land at Thirunelveali, where the civic body had reserved the land to construct a children’s park.

The SL military has put up a camp with Chinese assistance at the disputed land.

The civic representatives close to Mr Vasanthakumar also suspect the SL police in Jaffna for passing information to the SL military intelligence on the complaint he had lodged at their station. 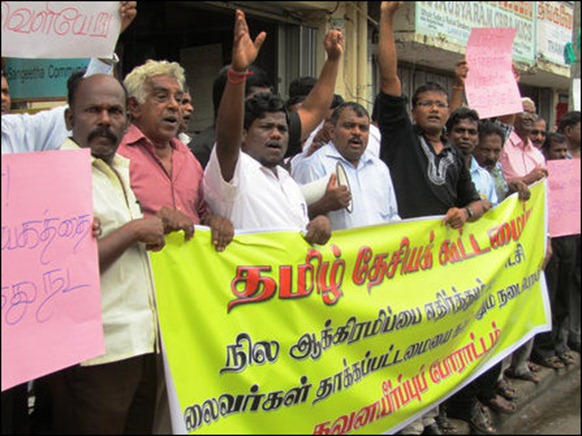 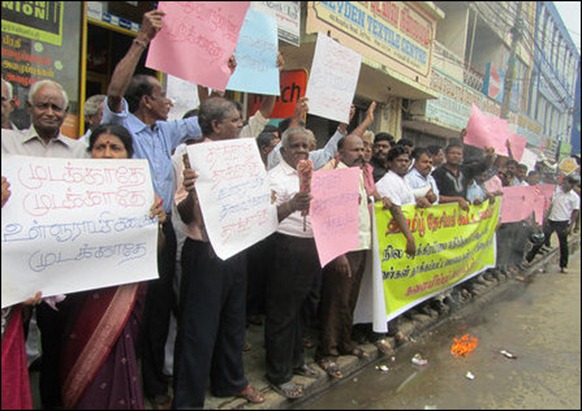 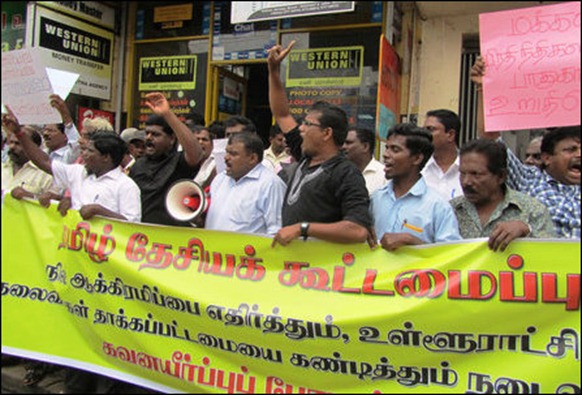