None of the Tamil diaspora bodies that have democratic or institutional mandate of Eezham Tamils have opted to engage in talks with the Sri Lankan government, which continues to negate the nationhood and right to self-determination of Eezham Tamils, said Dr Panchakulasingam Kandiah, the president of the democratically elected Norwegian Council of Eezham Tamils and a director in the board of the Global Tamil Forum. He was responding to a question by TamilNet on Saturday, on the statement of Sri Lanka’s cabinet spokesperson and minister Keheliya Rambukwela telling that Colombo was “making headway in its dialogue with the Tamil Diaspora”. The ‘dialogue’ will be held in Colombo shortly under the direct patronage of SL President Mahinda Rajapaksa, media reports from Colombo said.

The SL government must concede the status of Eezham Tamils as a Nation in the island, entitled to the Right to Self-Determination, and it should fully address the accountability issue by going through an independent international investigation. Only then there would be any chance of internationally mediated talks, Dr. Kandiah said.

“Even a person like Mr Sumanthiran of the TNA, working under gagged conditions in the island, and was arguing earlier in favour of negotiations for non-descript solutions, has come to the point of asking the question on Thursday that what hope is there in TNA participating the Parliamentary Select Committee (PSC) of Rajapaksa regime to discuss solutions, when there are no guarantees on the fundamentals, going beyond the majoritarian formula,” Dr. Kandiah cited. 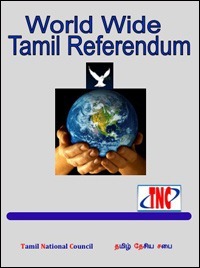 A publication summarising the results of diaspora referenda in 10 countries on independent and sovereign Tamil Eelam, brought out by Tamil National Council that coordinated the referendum in the UK
PDF: Word Wide Tamil Referendum – Full Report

The mandate of Eezham Tamil diaspora was very clear. The mandate of the elected representatives of all the democratic bodies in the diaspora is based on the independently held referenda in 10 countries, during and after May 2009, he asserted.

“We are in touch with almost all the democratically elected representatives belonging to country councils, transnational institutions and members of other time-tested organizations. There is no such move, ‘making headway’ as claimed by Colombo,” he categorically stated.

The re-mandate of Vaddukkoaddai Resolution was carried out in 10 countries, Norway, France, Canada, UK, Germany, Switzerland, Netherlands, Denmark, Italy and Australia. More than 210,000 people voted in the polls in these countries alone.

“This is the popular mandate of all our diaspora organizations, be it elected or non-elected,” he said.

“It is a significant number, especially when you compare it with the number of people who had voted for the TNA in 2004 polls in the homeland, which stands at 233,000” Dr. Kandiah told TamilNet.

Political observers in the island find a connection between Rambukwela’s statement and Colombo’s propaganda this week that it has ‘freed’ Selvarasa Pathmanathan alias KP.

KP, who lost his credibility with the Eezham Tamils as he had become a pawn in the agenda of Colombo and its abettors, is perhaps now groomed with the ‘freedom of travel’ to mobilize some of his former colleagues in the diaspora, who have not distanced themselves from his activities, the political observers in the island said.

Engineering at least a section in the diaspora to enter into submissive negotiations with the Rajapaksa regime and in the process simulating a ‘negotiating’ image of the genocidal regime in order to shield it in the international arena are in the agenda, the observers further said.

“None of them have any democratic mandate,” the NCET chairperson commented referring to individuals identified as having dealings with KP and through him with the Rajapaksa regime.

NCET is a pioneering organization among the political bodies in the diaspora that were democratically elected after May 2009.