On October 12 the National Council of Canadian Tamils (NCCT) organized the launch of a petition campaign directed towards the United Nations to conduct a referendum amongst Eezham Tamils originating from the North-East of the island to determine their political aspirations. Launched at the Scarborough Civic Centre in Toronto, the event saw participation from community members, elected officials and human rights activists. Most notable was the endorsement for the campaign by the Member for Provincial Parliament, Glen Murray endorsing the campaign through a letter addressed to the United Nations Secretary General Ban Ki-Moon. 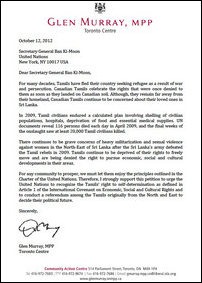 “The petition was created on the understanding that the sovereignty of Tamils in their Northern and Eastern homeland was lost during colonialism. Tamil sovereignty must be acknowledged to satisfy Tamil aspirations,” stated Mohan Ramakrishnan, Chairperson for the NCCT.

Citing the failure thus far of the international community to establish a mechanism for Eezham Tamils both within and outside the island to articulate and express their true political aspirations, the petition is calling for an alternative. In the past week the petition has also been launched in Montreal and members of the community have begun its collection in various locations throughout the two cities.

In the letter addressed to the Secretary General, Glen Murray states that he is supporting the petition campaign to, “ urge the United Nations to recognize the Tamils’ right to self-determination as defined in Article 1 of the International Covenant on Economic, Social and Cultural Rights and to conduct a referendum among the Tamils originally from the North and East to decide their political future.”

Political activists had shared with TamilNet that the endorsement from Glen Murray was seen as a positive sign for Eezham Tamils, which owed much to the lobbying efforts of Tamils in Canada. However, a dialogue with power in the Diaspora contains an inherent logic, which Eezham Tamils must carefully understand as they continue to make gains in this sphere.

The event also had speeches and endorsement from C.Mahendran, Assistant Secretary for the Communist Party of India (CPI) and Member of Parliament Rathika Sitsabaisan from the New Democratic Party of Canada.

Mahendran spoke on the importance of the petition campaign and drew comparisons to the “one crore signature movement” initiated in Tamil Nadu. He further elaborated on the importance and necessity for similar grass root campaigns in India and all states where the Tamil Diaspora resides. He emphasized that mobilizing the community around grass root campaigns that embody and display the will of the people can help to articulate a unified message to decision makers and provide platforms for solidarity to be built.

Speaking of the importance of a unified message, MP Rathika Sitsabaisan spoke to the importance of community members in Canada and in the diaspora collectively solidifying a concrete message to articulate to the international community and decision makers. She further committed to working towards raising the petition in the House of Commons Legislature in Canada.

While giving due credit to the launch of the campaign and the endorsements by important political figures, community activists also shared with TamilNet that the approach of lobbying by Eezham Tamils in Canada must be cautious.

It is a victory for all Eezham Tamils that an elected provincial representative should endorse self-determination for the Tamil nation, particularly in language that explicitly includes the diaspora, Tamil activists in Canada opine.

The right to self-determination, under the UN’s covenant, is an inherent right of national groups. Constituted global powers have consistently encouraged the government of Sri Lanka in its efforts to curtail and suppress the free exercise of that right among Eezham Tamils, and continue to do so to this day.

MPP Glen Murray’s stance is thus a break with the established pattern. He sets an example to follow for elected officials across Canada, Australia, Germany, the UK, and other countries where Eezham Tamils have settled.

However, second-generation activists working with solidarity groups are apprehensive that Mr. Murray’s courageous stand is not presently widespread and that without proper reinforcement from other quarters such support may easily be withdrawn in practice while expressed in words.