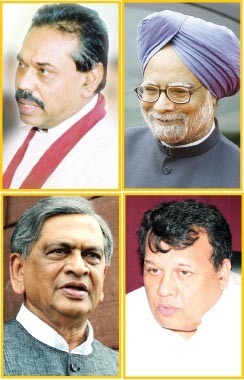 Sri Lanka’s Universal Periodic Review (UPR) on human rights scheduled to be taken up this week at the United Nations Human Rights Council (UNHRC) will be a litmus test for the Mahinda Rajapaksa government. That the international community would question the  government’s commitment on effectively implementing the 13th Amendment would be a key  issue at the UPR is evident given the role played by India as the head of the troika that would review Sri Lanka’s report on human rights.

Last week’s resurfacing of the debate on the 13th Amendment to the Constitution and calls by several coalition members of the governing party for its abolition, according to a diplomat in Colombo, was of very poor timing. The entire drama over the call for the abolition of the 13th  Amendment was orchestrated by certain sections of the government, most often considered  as the mouthpiece of the governing party, following a statement made by a high office in the country’s defence establishment.

The statement that the country needed to do away with the 13th Amendment, followed by a comment made by Economic Development Minister Basil Rajapaksa last Monday that the government was willing to look at a 19th Amendment to the Constitution to address the shortcomings of the 13th Amendment heralded the beginning of an anti-13th Amendment  campaign.

The Colombo Gazette website quoted Basil as saying the government will not hesitate to introduce a 19th Amendment to the constitution if it feels the 13th Amendment has some shortcomings. He had made this comment during a meeting with heads from the Tamil media. He had noted that the laws should be made to fulfill the expectations of the public and if those laws have shortcomings then they need to be amended.

According to Basil, the 13th Amendment to the constitution was introduced to resolve issues faced by Tamils in the north of the country. He had recalled that both the TNA and the LTTE had at one time strongly opposed the 13th Amendment and the LTTE had even assassinated former Indian Prime Minister Rajiv Gandhi over the issue. Meanwhile, NFF Leader and Minister Wimal Weerawansa in a letter to President Rajapaksa last Sunday had warned that the 13th  Amendment has the potential to undo the achievements of government troops who defeated the  LTTE. Weerawansa while claiming that the amendment undermined the people’s sovereignty and supremacy of parliament had called on the President for a referendum to abolish it.

Communist Party Secretary and Senior Minister D. E. W. Gunasekera making a statement to the media said that abolishing the 13th Amendment would be an invitation for separatism. He noted that armed movements in the North had entered the democratic political process due to the 13th Amendment. According to Gunasekera, it would only be the Tamil Diaspora that would be happy with news of a move to abolish the piece of legislation.

President Rajapaksa in January this year assured the now resigned Indian External Affairs Minister S. M. Krishna that the 13th Amendment to the Constitution would be fully implemented and that a solution that even goes beyond the 13th Amendment would be considered. Krishna made the announcement of the agreement between the Indian government and Rajapaksa to the Sri Lankan media in front of his counterpart, External Affairs Minister Prof. G. L. Peiris.

However, the government denied Krishna’s statement resulting in the initial friction between Sri Lanka and India. In March this year, a few days prior to the voting on a US backed resolution on Sri Lanka at the UNHRC, Krishna wrote to Peiris requesting the official stance of the Sri Lankan government. The Indian minister sought a clarification from his Sri Lankan counterpart, which never reached New Delhi. The end result was that India voted in favor of the resolution on Sri Lanka. New Delhi’s decision promoted the Rajapaksa government to engage in tit-for-tat actions for a few months, until both sides decided to bury the hatchet and move forward.

President Rajapaksa had a successful visit to New Delhi last month where Indian Premier Manmohan Singh assured Sri Lanka of India’s continued to support. Singh had even agreed to request the TNA to participate in the proposed parliamentary select committee (PSC) to find a final political solution. However, when the TNA visited New Delhi a few weeks back, the party representatives expressed their dissatisfaction at the Rajapaksa government’s failure to address their issues. The TNA members had informed New Delhi that the government’s actions, especially in relation to the introduction of the controversial Divi Neguma Bill, were indicative that there was no commitment to devolve power in a meaningful manner. TNA Leader R. Sampanthan observed that the government was trying to centralize powers vested with the provincial councils.

However, some members of the government believe that the move to abolish the 13th Amendment has been prompted by the clash between the executive and the judiciary. The delay in passing the Divi Neguma Bill has caused some frustration to the government and the issue of the approval being needed from the provincial councils to pass the Bill along with the cases filed before the Supreme Court had pushed an irate government to do away with the 13th Amendment in its entirety.

The Indian government is however keeping a close watch on the developments in Sri Lanka. The 13th Amendment has been pushed by India as a platform for Sri Lanka to devolve power. The 13th Amendment to the Constitution was brought about as a part of India’s intervention to broker a solution to the Tamil demand for political autonomy in 1987.

The Indo-Lanka Accord signed in 1987 by then Indian Premier Rajiv Gandhi and then Sri Lankan President J.R. Jayewardene hascome under scrutiny among Sri Lankans as well as Indians. The fact that the agreement was reached amidst much protest in Sri Lanka,

even within the then UNP government, is one reason for the protests amongst Sri Lankans at present.

The Indo-Lanka Accord led to the insurgency in 1988 led by the JVP, which continuously opposed the 13th Amendment since the inception. Apart from the UNP, the TNA and a few left parties, a majority of the political parties would push for the abolition of the 13th Amendment if and when the government actually moves with it. The SLMC, which has expressed sentiments against any move to abolish the 13th Amendment at present, is likely to finally give in the  governing party pressure and tow the line when “push comes to shove.”

Although Media Minister Keheliya Rambukwella last week announced at the Cabinet press briefing that there was no move to abolish the 13th Amendment, he did not that it was for the time being.

He added that constitutions are amended often and that even India had amended its constitution many times. Rambukwella’s wavering response is definitely not going to satisfy India. New Delhi believes that any other amendment or solution to the ethnic issue would have to be based on the 13th Amendment since it is the only clause in the Sri Lankan Constitution that deals with the devolution of power.

Nevertheless, the government would be taken to task on its voluntary commitments made at the last UPR in 2008. Especially where the government has undertaken to effectively implement the 13th and 17thAmendments. In its report to the UNHRC, the government has stated, “The Working Group placed emphasis on the implementation of the 13th and 17th Amendments to the Constitution during the initial UPR of Sri Lanka in 2008. GoSL made it clear that it would take steps to address and remedy the practical impasse (relating to appointments, etc., to certain public bodies) created as a result of the 17th Amendment and stated that steps would be taken to address outstanding issues arising out of the 13th Amendment which deals with devolution of power to Provinces as well as its implementation. The changes wrought by the 17th Amendment in 2001 were further amended by the 18th Amendment to the Constitution which was enacted and certified as law by the Speaker of the Sri Lankan Parliament on 09 September 2010.”

Referring to the effective implementation of the 13th Amendment, the Rajapaksa government in its report has observed that it is an ongoing process. Apart from the constitutional matter, Sri Lanka will also be scrutinized in several fronts in relation to actions on international human rights treaties, legislative framework, cooperation with human rights mechanisms, implementation of international human rights obligations, freedom of religion or belief, freedom of expression, association and peaceful assembly, and right to participate in public and political life.

According to the UNHRC, 99 stakeholders have made submissions to the Council on Sri Lanka’s UPR process. Among them are 17 joint submissions from international as well as local NGOs. In addition a host of countries have submitted their questions on Sri Lanka’s report to the UNHRC. Among the countries that have already raised questions are Spain, Canada,  Mexico, United Kingdom, United States, Czech Republic, Netherlands, and Denmark. In their submission, the US, among others, have raised concerns over the delay in holding Northern Provincial Council elections, High Security Zones, threats against journalists and the lack of progress in high-profiled human rights violations including the assassination of five students in Trincomalee in January 2006, the execution of 17 French Action for Hunger aid workers in Muttur in August 2006, the assassination of  The Sunday Leader editor Lasantha Wickrematunge in January 2009 and the disappearance of cartoonist Prageeth Eknaligoda in January 2010. The US has also asked about the status of the Witness and Victim Protection Bill, investigations into the Channel 4 video, and the bilateral talks with the TNA that has been continuing for  two years without any progress. Both the UK and US have asked about the status of the recommendations from the Lessons Learnt and Reconciliation (LLRC) report that  were not included in the LLRC Action Plan.  Canada has inquired when the Sri Lankan government would address accountability issues through a formal independent process of investigation of alleged violations of international humanitarian law and human rights that occurred during the civil conflict. President Rajapaksa’s special envoy for human rights, Minister Mahinda  Samarasinghe Following the review on November 1st, the troika chaired by India review Sri Lanka’s progress in the human rights front and prepare a report that will be adopted on November 5th.

It has been reported that he had visited India on the invitation of National Security Advisor Shivshankar Menon and had called on Defence Minister A. K. Antony.

The discussions have been based on improving military cooperation between the two countries.

The Indian media reported that he had also held a meeting with Defence Secretary Shashikant Sharma where they have discussed the entire gamut of military relations between the two sides.

New Delhi officials are likely to clarify the comment made by Gotabhaya Rajapaksa on the 13th Amendment as well.