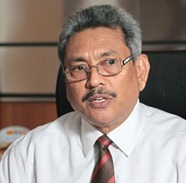 Defence Secretary Gotabaya Rajapaksa said that the Sri Lankan government is looking at seeking legal mean of stopping existing illegal operation of the LTTE rump, operating from the overseas.

“Most of the hierarchy of the LTTE were killed at the final stages only a few low rung cadres have managed to escape and are now engaged in false propaganda operations in order to collect funds from the Diaspora. They were engaged in illegal operations like gun running and human smuggling using their shipping fleet various organizations and front offices in many parts of the world. The government is looking at seeking legal means of stopping existing illegal operation of the LTTE rump,” Mr. Rajapaksa said.

He made this comment addressing the Intercontinental Chapter Meeting of the Young Presidents’ Organization, held at the Lakshman Kadirgamar Institute of International Relations and Strategic Studies in Colombo.

Speaking at the event Secretary Defence said that Sri Lanka was plagued with ruthless terrorist attacks which had caused immense suffering to our entire population and when His Excellency Mahinda Rajapaksa was elected to the Presidency in 2005, he had a mandate from the people to end the terrorist conflict once and for all, a daunting task which many previous governments had failed. The LTTE terrorists had no interest in peace, instead, they exploited the respite given through peace talks and ceasefires to kill its opponents and strengthen its offensive capabilities he said. The terrorist did not allow any democratic freedoms in the areas they dominated so the President was keen to resolve the conflict and his first priority was to do so through peaceful means he added.

With the successful end of the humanitarian operation the government was left with a huge task of ensuring the welfare of around 300,000 internally displaced persons he reminded. The government had to demine an area of about 5000 square kilometres of land before resettling the IDPs he said. Rehabilitating thousands of ex-LTTE cadres and reintegrating them to society was carried out in a well planned manner the Secretary noted. He mentioned that the government after a national consultation conference with key officials in the UN and other relevant agencies, work on creating welfare villages to house the IDPs began and the facilities there exceeded international standards. He reiterated the effort of the government’s commitment in providing relief to the people even though the LTTE did not allow these resources to be used properly.

Talking further he said that the Government has launched an initiative to construct over 78,000 houses in the North and East, including houses constructed with donor assistance and the Sri Lankan Army alone has renovated more than 7,500 houses and constructed nearly 4,600 new permanent and 6,000 semi-permanent houses for civilians being resettled. And under the government’s "Northern Spring" programme most of the infrastructure development work including building of roads, minor tanks, public buildings, hospitals and schools and provision of electricity, water supply and sanitation, upgrading of healthcare facilities were undertaken, he added.

Within just three years and four months after the defeat of the LTTE, all the Internally Displaced Persons living in the welfare camps have been successfully resettled and the successful completion of the resettlement programme and the closure of the IDP camps in such a short period is a significant and laudable achievement by any standard he disclosed.

Speaking on rehabilitation the Secretary said that speedy actions taken by the Government with the assistance of the military to rehabilitated nearly 12,000 ex-LTTE cadres who had surrendered to the Security Forces at the end of the Humanitarian Operation was a complete success as seen on a research conducted by two American academics, Dr. Kruglanski and Dr. Gelfland of the University of Maryland, College Park, which indicated the significant decline in the support of violence amongst all beneficiaries of the rehabilitation programme, including even the most hard-core cadres. He further said that every opportunity has been given to the rehabilitated and reintegrated ex-LTTE cadres to resume normal lives in society including assistance to set up their own businesses, obtain funds for self-employment, and undertake farming and fisheries related activities.

He said that peace and stability the entire country now enjoys has already yielded tremendous dividends as tourist arrivals are on the rise, and the country has been chosen to host several significant international events including the 58th annual Commonwealth Parliamentary Association Conference, the 2012 Twenty20 Cricket World Cup, and the Commonwealth Heads of Government Meeting in 2013.

He expressed optimism about the country’s future prospects and requested the business leaders to exploit the vast potential the country has to offer including the highly educated work force in fields such as Information Technology. There are a number of Sri Lankan companies that have already made a mark internationally. The same can be said for fields such as Medicine, Accountancy, Engineering, and various other sectors in which Sri Lanka produces large numbers of committed and talented professionals every year he added.

Pointing on the government’s initiatives he said in order to realise the tremendous growth potential that the country has, the Government of Sri Lanka has undertaken a range of development initiatives and the on-going urban development programmes are a case in point. These are focused primarily on uplifting the quality of the country’s urban spaces through the development of clean, green, people friendly cities and the commercial capital of Colombo is being transformed through several initiatives he added.

He was confident that the urban regeneration programme underway in Colombo, and the urban development projects underway in the other cities around the country, will result in the country’s urban spaces becoming wonderful cities in which to live. He mentioned several major infrastructure programmes presently underway, including the building of highways between key cities, the upgrading of the railway network, and the expansion of electrification and water supply and building new Ports and airports.

Participating in a question and answer session at the end of his speech Secretary Defence said most of the hierarchy of the LTTE were killed at the final stages only a few low rung cadres have managed to escape and are now engaged in false propaganda operations in order to collect funds from the Diaspora. They were engaged in illegal operations like gun running and human smuggling using their shipping fleet various organizations and front offices in many parts of the world he added. He said the government is looking at seeking legal means of stopping existing illegal operation of the LTTE rump.

Answering a query the Secretary said the governments had to face many issues like Political/Military/Economic/ Social when seeking a solution to the problem and also there were a lot of external pressures and involvements. But this government addressed all those issues successfully and in constant liaison with other countries and carried out the humanitarian operations he added. He again reiterated the need for political stability in winning the war and also achieving post war development goals of the country. He extended an invitation to all to join hand and work together.

Even though the size and the strength of the military was increased the government never compromised on the welfare issues of the general masses he said. Public support was a vital component in the fight against terrorism he noted. The President as the Commander in Chief gave clear directives to military and also personally visited to many parts of the conflict zone during the operations he said. Had we backtracked on our aim during difficult times we would be still embroiled in the war, strong leadership, proper planning and clear directions took us to success, he reminded.