The genocidal state in Colombo has started surveying a strategically located coastal strip along the Gulf of Mannaar in the occupied country of Eezham Tamils, for appropriation initially in the guise of mineral cum economic exploitation by external firms, but ultimately for the genocidal-military purposes of sealing off Eezham Tamils, wedging them from Tamil Nadu at the closest contact points and to effectively check the Indian coast in any eventualities in the future. The current moves in the Mannaar coast follows the appropriation of the northern coast of the Jaffna Peninsula for the SL military and for the activities of a Chinese firm. 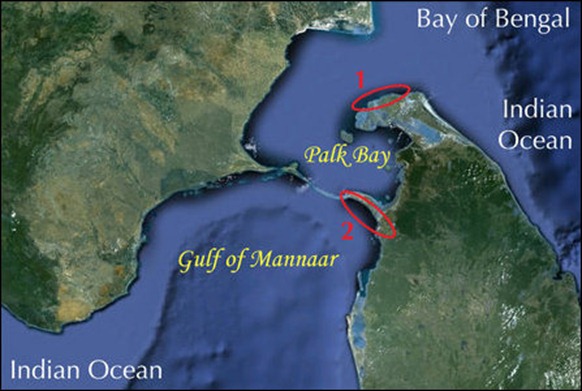 Red circled coastal stretches in the Palk Bay and the Gulf of Mannaar: 1. Northern coast of Jaffna peninsula, along with its harbour and airport, already appropriated by the occupying SL military. 2. The coast commanding the Gulf of Mannaar that is being surveyed now for appropriation. [Satellite image courtesy: Google Earth. Legend by TamilNet]

Sinhala surveyors of Sri Lanka’s Survey Department from the south have recently come to Mannaar to survey the entire coast from Thalai-mannaar pier to Arippu in the district, facing the Gulf of Mannaar. The local Tamil surveyors of the SL department were also instructed directly from Colombo to work with them.

The project is being carried out without intimation to even the SL Government Agent in Mannaar, informed sources said.

Circulating speculations on the reasons for the survey project range from ilmenite mining to lease going directly or indirectly to a power outside of the region.

The particular stretch of coast commands the entire Gulf of Mannaar.

Occupying Sri Lanka’s military installations and cantonments were already established at Thalai-mannaar, Tha’l’laadi and at Arippu, along the stretch. Tha’l’laadi has a large base and a new one is being built at Channaar on the Palk Bay side.

China is in the forefront in building cantonments for the occupying Sinhala military.

Coupled with Sinhala military activities and land grab, a systematic project is now being carried out by Colombo’s ministers and agents to incite communal disharmony among the Tamil-speaking peoples of the district, especially between Muslims and Catholics, the major communities of the district.

Meanwhile, Buddhist establishments and statues are built widely in the district where there are no Buddhists at all at present, but perhaps with plans of colonisation in the near future. Some of the statues erected are waiting for ‘unveiling’.

The strategic part of the district, commanding both the Palk Bay and the Gulf of Mannaar as well as commanding the closest communication line with the Tamil Nadu coast, has become a hive of intense Sinhala militarisation and demographic changes in recent times. 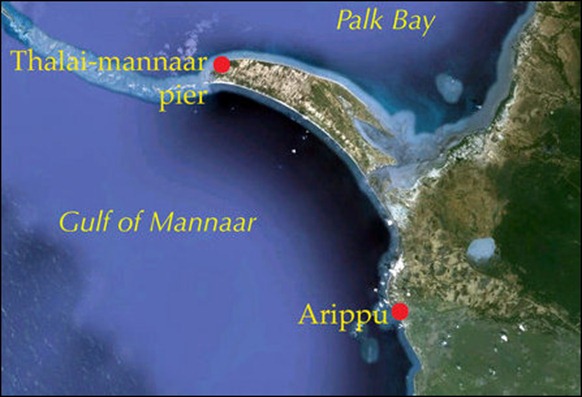 Detail of the coast facing the Gulf of Mannar that is being surveyed now, from Thalai-Mannaar Pier to Arippu. . [Satellite image courtesy: Google Earth. Legend by TamilNet]

Comments from an Eezham Tamil political analyst in the island:

Ever since its independence from the British, the Sinhala state in Colombo was consistent in coupling its genocide of the nation of Eezham Tamils with its anticipation and preparation for a military confrontation with India at some stage, at some time.

When belligerence comes from the island, now it will be definitely an internationalised one, thanks to the failures of New Delhi in keeping the issue within the region by firmly taking the side of solutions justifiable to humanity and logical to a chronic national question.

Sooner or later, people in the front line of the receiving end of Colombo’s belligerency are going to be the Tamils of Tamil Nadu.

Political observers have long been warning on the policy of Krishna Menon legacy in New Delhi that failed with China in the northern frontier in 1962, now failing in the southern flank due to its arrogance and biases.

But time is now fast running out for people to believe that any changes in the power equations would make New Delhi to realize and undo the injustice committed on the nation of Eezham Tamils, as some gullible ones say, or for people to harp on that some other power would come forward to bring in just solutions.

Only an internationalized mass struggle in unison with other affected peoples of the world, countering all the powers to their edification, would bring in any real changes in the order.

If the cause is universally noble and if the strategy is righteous, Tamils need not hesitate in opting for such a struggle.

More than the so-called development to rebuild them, what the Tamils actually need to keep their souls and existence going is confidence in their cause that it is universally noble and beneficial to entire humanity.

No development of one’s own, or even the so-called rehabilitation, could take place without such an ideology. Eezham Tamils are not like any of the defeated powers of the WWII or like some of the fallen regimes of the world to be ashamed of any aggression and to think of a future with the acceptance of defeat. International struggle is their right.

Being the largest formation in the immediate region, the Tamils of Tamil Nadu have to realise their responsibility in effectively internationalising the mass struggle.