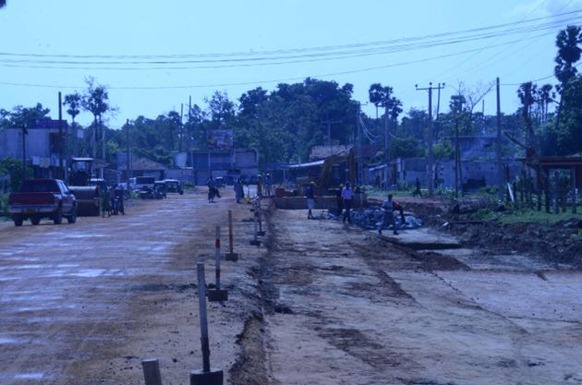 Pavalochini and her husband Ravikumar make a living selling bicycles. They sell them for Rs.49 a kg, for scrap is what the bikes are: rusted, twisted, bent out of shape, the tyres long gone after three years out under the scorching sun at the “bicycle graveyard” near Mullaithivu.

From their home in the Konapulam camp for the displaced in Valigamam, Ravikumar sets out once or twice a week on the 95-km journey to the graveyard.

There, Pavalochini said, he goes about collecting every scrap of metal left behind by civilians and the LTTE as they retreated stage by stage to a narrow strip of land in Mullaithivu in the final stages of the war in 2009.

Buses, vans, cars, and thousands of bicycles, damaged by the heavy shelling and their remaining parts rusted, are still heaped by the side of the road. Scrap hunters like Ravikumar forage for the good bits, especially bicycles, and bring them back home to sell.

“There are some Muslim dealers who buy these cycles for Rs.49 per kg,” said Pavalochini, as we sit talking in the shade of a mountain of bicycles in her front yard. “It might fetch Rs.65 a kg if we took it to Colombo and sold it ourselves in the scrap market, but think of the transporting costs.”

Many others in the camp are in the same business. The other day, said Pavalochini, she had to feed the children in the neighbouring house. Both parents went off scrap hunting to the graveyard, and did not return for two days.

The wartime scrap heap is a reminder of how recently the fighting ended. It also underlines how Jaffna and its people are still struggling through a layered past and present to come out of three decades of conflict and war.

Post-war Jaffna is very different from what it used to be. For one, there is no more the blanket of darkness and fear that used to fall at night, the dread of the torchlight-flashing sentry at checkpoints, and the long whistle of shells as they flew in the air before landing on their target with a deep explosive thud.

There are no checkpoints, the physical presence of the Army more discreet now. Shops are open late into the night and people are out on the streets at all hours. In place of the ubiquitous bicycles and the old Morris cars that ran on kerosene, defying the petrol blockade, all manner of vehicles now clog the streets.

Among the changes is a large hotel opposite Duraiappah stadium. The owner, Thilak Thiagarajah, is perhaps the biggest private investor in Jaffna today. Mr. Thiagarajah left Jaffna when he was 17 years old, and is a realtor in the United Kingdom.

His 42-room hotel, Tilko — named after himself and his wife Kokila — is a symbol of the hope, at least his, that Jaffna will regain what Tamils like to call its “lost glory.”

“My belief is that to have peace, you have to develop the economy. What we should do is create jobs, create grassroots industry,” said the 56-year-old hotelier, who divides his time between Jaffna and his large suburban home in Chigwell outside London where his chartered accountant wife and two children live.

“I want to show that Tamils can make it work in Jaffna,” he said, as he recounted his family’s struggles in 1970s Sri Lanka, forcing him to leave at a young age.

But he does not have much company. Most other diaspora Tamils came in after the war, saw, and flew right back. In the months after the fighting was over, banks rushed to the Tamil-dominated peninsula to make good on what they believed would be a post-war boom. The expected revival, though, has yet to happen.

A recent hike in interest rates, has put a damper on business across Sri Lanka. Jaffna suffers additionally from a continuing atmosphere of uncertainty. The province continues to be ruled directly by Colombo, and the presence of nearly 18,000 soldiers, and the authority with which the military — entirely Sinhalese — conducts itself, add to the uncertainty.

Also, after years of dislocation and displacement, people neither have the documentation or the security demanded by banks for advancing loans, for business or even for house building.

Last year’s “grease devil” incidents further heightened people’s fears. A number of women in parts of the country, but more so in Jaffna, reported being attacked by a grease coated figure. The incidents got attributed to the Army, and enveloped Jaffna in an atmosphere more reminiscent of the war years.

“So everyone is waiting and watching. No one is investing,” said C. Jayakumar, president of the Jaffna Chamber of Commerce.

The local economy is made up mainly of retail trading. Agriculture and fishing are picking up slowly as people return to their homes. In Achuveli, which boasts Jaffna’s famed fertile red soil, farmers who have regained possession of their lands from the security forces are growing vegetables and fruits for the local market. Grapevines are a common, if surprising, sight.

What is lacking is industry, which means jobs are limited. Before the conflict turned into a full-fledged war, Jaffna had a state-run cement factory, in Kankesanthurai. There is no talk of reviving that. A cold storage plant would have given a boost to fisheries, but there are no plans for one.

The only job opportunities are in shops or in the small service sector. There is only one university, which has limited seats. Most students discontinue their education after their ‘A’-level exams, which makes jobs harder to get. Young people are not interested in staying. All this makes people suspect it is a deliberate plan to deplete Jaffna of its population, and “colonise it” with Sinhalese settlers.

Spiralling property prices in Jaffna, and the construction activity all over the peninsula provide a more optimistic picture. Everywhere, people with means – which in Jaffna means those with relatives abroad who send them money — are repairing properties that were damaged, abandoned and fell into disuse during the years of conflict. Malls and other commercial buildings are coming up.

The thick construction dust over Jaffna, however, is from road construction: armed with $423.9 m from China’s Exim Bank, the government’s Northern Road Rehabilitation Project is building 512 km of roads in the Northern Province.

A large part of the contract was given to the China Railway no. 5 Engineering Group, which in turn has subcontracted the road works to Sri Lankan companies. China National Aero-Technology Import & Export Corporation is the other main contractor, which has sublet works to Sri Lankan firms.

Already, the A9 highway that connects southern Sri Lanka to the northern peninsula, has been refurbished. Once known as the “highway of blood” for the deadly battles over it between the LTTE and the security forces, it now eases the passage of goods and traders between Colombo and Jaffna.

But Tamils see roads as a double-edged facility: it eases their travel but also helps southern Sri Lanka send its goods to the North, while there is not enough in Jaffna to send to the south. Suspicious Jaffna minds see the new road network as preparing the Northern province to be more liveable for Sinhalese.