(Kumar David) There is a superficial view that the government is a concordant gathering of the like-minded while the opposition is all hither and thither and unable to get its act together. Superficial observations are not entirely without merit as sycophants and bootlickers line up on both sides of the Cabinet and Parliament, echoing their masters’ voices (note plural in honour of the siblings), reciting “Yes Sir! No Sir! Three bags full Sir”. It is also true that the political opposition is failing to realise the minimum it can, while trade unions, civil society and professional bodies are doing better.

First let’s look at the constituents of government and opposition. The UPFA consists of nine parties with the SLFP, the principal party of the Lankan bourgeoisie (remember this dubious honour no longer belongs to the UNP), at the helm. The other important UPFA entity is the party of monks and Sinhala chauvinists, the JHU. These two stamp on the UPFA its ideological character, while the Rajapaksa siblings set an authoritarian bearing towards an autocratic future. The anti Rauf Hakeem Muslim party too sports a base and parliamentary strength. The rest are appendages, parasites, chaff not critical to the survival of the regime; Weerawansa’s ultra-racists, the three decrepit relicts of the Dead Left (LSSP, CP and DLF), Dinesh’s MEP, and the Douglas and Pillayan circuses. A menagerie, not a concordant gathering!

The parliamentary group includes three other formations, each more influential than all the chaff put together – the UNP crossovers, a bunch of political trash, SLMC money making hucksters, and the CWC whose leader fritters away what his father built over decades. Nevertheless, notwithstanding the rot, these three have an electoral base, they can bring three or four (or in the case of the SLMC more) members to Parliament with minimal support from the SLFP or UNP. They are epiphytes, not parasites. The count of entities in government has reached twelve if my reckoning is correct. Interestingly, much as they hate each other like Ali Baba’s forty thieves, they still hang together; a phenomenon I will return to after enumerating the Opposition.

The opposition consists of fewer entities; the UNP, TNA-ITAK, JVP and the Peratugami (Frontline Socialists, the JVP breakaway party). Then, though relatively smaller in size but capable of winning seats in Parliament, are Mano Ganesan’s DPF and General Fonseka’s outfit. Finally there are four very small parties on the sectarian left; Siritunga’s USP, Bahu’s NSSP, the Maoists and Socialist Equity. Their following is insignificant, but they have long ideological histories and influence beyond their numbers – I am glad. In summary the opposition is intrinsically less discordant than the pro-government amalgam. The foremost discord in the ranks of the opposition is not between parties, but the insane civil war inside the UNP. 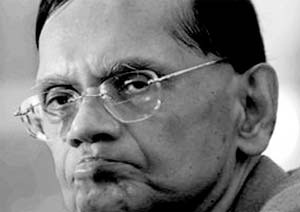 The cement that binds the UPFA and the Government Parliamentary Group is bribery. I do not mean that every member of the Cabinet and deputy minister is taking baksheesh from local and foreign companies, bribes from the public, favours in kind like women, or kickbacks from the drug trade, though more than we know of are likely on the take. What I do mean is that every member of Cabinet and deputy minister is on a gravy train at the expense of the public exchequer. The president retains power by bribing the Cabinet since a post in the Cabinet is essentially a bribe given to 40 persons (or 80 if you count deputies) as a retainer for their support. The president bribes ministers using public funds and lets them run wild; they in turn allow the regime to get away with murder, metaphorically and literally. That’s why the Cabinet needs to be so large, that’s the deal, that’s the binding cement.

Do not underestimate the benefits of ministership. First come status and prestige – in our obsequious society a buffoon in national garb and an amathithuma title is held in demigod esteem that would embarrass a president of the United States. However, it is the perks that are corrosive and corrupting. I am referring not merely to state accommodation, cars, drivers, petrol and allowances, but to the numerous sycophants ministers appoint. The number ranges from less than 20 in a small ministry to over 50 in a large one. Hangers-on are appointed as private, press, coordinating and all manner of secretaries, with salaries, petrol allowances and perks. It is having this small army of publicly paid slime-balls that makes the carrot of a cabinet post really attractive. You may say Dead Left ministers, or GL, or maybe a few others are not on-the-take for bribes and kickbacks, but I say: “Ok that’s true, but they are all on the publicly funded gravy train that I have described”.

My purpose in this recounting is not a moral one; I am not on a crusade to expose graft, direct or indirect, among ministers. My purpose is political; my intention to show that skin-deep concord in the government has its foundation in the shared pay-off that ministerial posts offer. There is no ideological, economic policy, devolution related or programmatic cohesion in government. Ask ministers what they think of Gotabaya and militarization, ask SLFPers about Mervyn or Duminda. Want to find out who is on the drug money circuit? A rival UPFA MP is the best source. The point is this, the government-side is patching over more divergences and differences than the opposition-side; however, it is not dysfunctional, because like the forty thieves in that delectable Arabian Nights fairytale, they are all in on a publicly funded gravy train.

Can the Opposition unite?

They say it takes a heart attack to change your ways; the UNP has had it, and if it cannot still overcome its internal lunacy it deserves to die. As an outsider I have no axe to grind on behalf of any of the contenders, but I do have an interest in the UNP playing its role to rid Lanka of the Executive Presidency (EP), the fetid source of putrefaction in public life. General Fonseka must be congratulated for firing up a movement and getting a mass campaign against EP off the ground.

Is there some principle because of which some party in the opposition wishes to retain EP? Not that I am aware of. There was a time when Tamils clung to the misguided view that EP was a safety net, but no more. They have learnt the hard way that hoping to be kingmaker between SLFP and UNP is a misbegotten illusion; so the TNA has come on board against EP. The nigger in the woodpile is Ranil who can’t get a hold on his own party but covets the presidency. If he impairs an alliance any longer, those who say “Off with his head” deserve to win the day.