(Dr Vickramabahu Karunaratne) The campaign started by those who are very close to the President to do away with the 13th Amendment shows that the Constitution making process in the coming period could become arbitrary and carried out at the whims and fancies of the chauvinist elements within the regime. If it really takes place, this will go into history as yet another effort to cater to the popular majoritarian impulses in Lanka. As the all powerful Defence Secretary Gotabaya Rajapaksa called for the abrogation of the 13th Amendment and the chauvinists JHU and pseudo nationalistic Wimal Weerawansa’s NFF jumped the bandwagon, there were fears that the political leadership in the country would indulge in another crazy attempt to change the supreme law of the land. Of course the remarks by Keheliya Rambukwella that the government does not have plans to abrogate the 13th Amendment for the ‘time being’ changed the mood. As Trotsky pointed out in the permanent revolution thesis, the bourgeoisie leaders who ruled Lanka too, failed to improve on the semblance of liberal democracy left behind by the British. It is this inability of local capitalists that compels the proletarian movement to intervene to carry out the tasks of democratic reorganization of society. The 13th Amendment came with a strong intervention of the left movement in this country. In the course of that struggle, left parties lost nearly a thousand national and local leaders including Vijaya, Vimalasena, Panditha and Chandra Vimala. 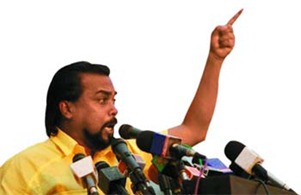 However, the failure of the 13th Amendment should primarily be attributed to the dislike of the Central Government to devolve powers to the existing provincial councils. This problem has been discussed extensively since the time of Chandrika, and the LLRC has indicated in detail, the nature of the improvement that could satisfy the Tamil people. In short, the solution to the current deficiencies in the 13th Amendment lies in strengthening the power sharing structure stipulated by the amendment.

However, the willingness on the part of the current regime to share power with national minorities is most important. Clearly, the Mahinda regime has failed even to initiate a truly national dialogue to seek a political solution. Hence the Tamil leaders question the genuineness on the part of the government. Set against the latter’s rush to enact the 18th Amendment, which dismantled all salient achievements of the 17th Amendment, no one can blame the Tamil leaders for their mistrust. On the other hand the inability of the government to seek a political solution is glaring. In spite of populist acts made to show their loyalty to the voice of the oppressed, the Mahinda regime’s steady march towards authoritarianism cannot be hidden.

All attempts to change the Constitution, except the 13th Amendment, can be proved to be reactionary. This includes the republican Constitution of comrade Colvin. Unfortunately, he was a prisoner of a bourgeoisie government dominated by majoritism. He claimed that Parliament, as the representative of the people, was empowered by his Constitution. But it was passed by an assembly without the Tamil leaders. Hence it inherited majoritism by birth. As many pointed out, the tampering with the Constitution in this manner began by D.S. Senanayake who disenfranchised the Tamils of Indian origin under the Citizenship Act. The true intention of DS was to manipulate the electorate and eliminate an electoral challenge emanating from the Lanka Sama Samaja Party (LSSP) and the Communist Party. “Liberal” leaders have failed to go beyond the chauvinist limitations they themselves created. They have come to an apex in this process with the creation of the Mahinda regime. It is based on the ideology of patriotic war to establish a unitary constitution. War was interpreted as a patriotic war against an international conspiracy conducted by an alien power, probably western based, to take over Lanka. Having defeated the alien force, the government is, step by step, removing all remaining tentacles of the alien power. One of the most important shackles left behind by the conspirators is the 13th Amendment! Accordingly, the campaign for the removal of 13th Amendment is a continuation of the war in the domain of politics. This is the story of the chauvinists.

What is going to happen? This is the question raised by concerned people. They are surprised to see the emergence of Sinhala chauvinism at the top layer of the ruling elite. However it is still at the apex and there is no corresponding mass activity at the bottom. At the bottom we see the campaigns of workers, fishermen, peasants and students demanding higher payments and better wages. These are mostly led by left leaders who support devolution as a way out of the national problem. Thus, one can say safely that if the conflict flows over to the streets, this time the chauvinists will be defeated.