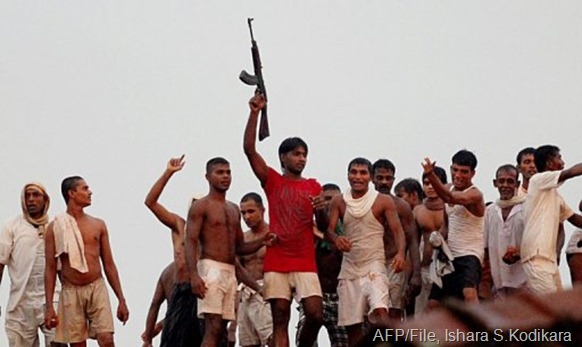 Sri Lanka’s main opposition party Sunday demanded an independent inquiry into a prison riot that left 27 convicts dead, alleging many were shot by security forces in a cold-blooded "massacre".

The United National Party (UNP) called for a parliamentary investigation into the riot that erupted on Friday evening at the maximum-security Welikada prison in the capital Colombo.

"This is nothing but a massacre," UNP spokesman Mangala Samaraweera told AFP. "Most of the convicts appeared to have been killed in cold blood. We want a parliamentary select committee to go into this."

Troops were deployed to quell the riots and the military retained a heavy presence at the sprawling prison complex Sunday.

During the riot, armed inmates climbed onto the roof and fired at troops and police. A handful escaped and hijacked a three-wheel rickshaw taxi which was stopped by heavy gunfire from security personnel.

Prisons Minister Chandrasiri Gajadeera told parliament Saturday that 27 inmates were killed and 43 others — including 13 police commandos, four soldiers and two civilians — were injured.

He said there would be an internal prisons department inquiry into the riot, which was sparked by a police commando raid for contraband inside the prison on Friday.

The violence continued until early Saturday with some prisoners raiding a jail armoury and grabbing about 80 weapons, including automatic rifles.

Prisons chief P.W. Koddippili said guards were searching the site Sunday for a small number of guns which were still missing. Officials declined to say if any prisoners had escaped during the unrest.

Friday’s violence was the worst prison riot in Sri Lanka since 1983, when more than 50 ethnic Tamil prisoners were massacred at the same jail by Sinhalese convicts during anti-Tamil riots that gripped the country.

There was similar violence at the same penitentiary in January when 25 inmates and four guards were injured.

The authorities have yet to release autopsy reports on the dead. Colombo police chief Anura Senanayake said most of those killed were hard-core criminals, some of them serving life terms.