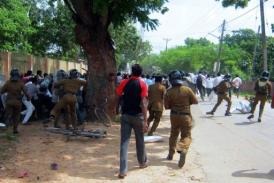 Sri Lanka’s main Tamil party Thursday demanded troops be withdrawn to barracks in the former rebel heartland of Jaffna after the worst ethnic violence since the end of the island’s decades-long civil war.

About 20 students were wounded, seven of whom needed hospital treatment, in clashes with security forces at Jaffna University on Wednesday, underscoring the tensions in the region despite the end of the conflict in May 2009.

The Tamil National Alliance (TNA) lawmaker for the Jaffna district accused security forces of triggering the unrest by storming the university on Tuesday to thwart a planned commemoration for defeated Tamil Tiger guerrillas. 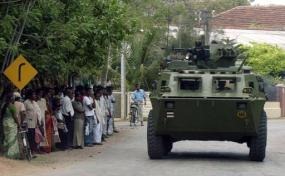 "Their action provoked a demonstration on Wednesday and then the police and the army moved in to break it up," Eswarapatham Saravanapavan told AFP.

"We have always wanted demilitarisation of Jaffna. After this incident what we say is that they must at least confine themselves to their barracks as a first step," Saravanapavan said.

The vast majority of the students at the university are ethnic Tamils who make up around 12 percent of Sri Lanka’s 20 million population.

The military, which is almost entirely composed of ethnic Sinhalese, crushed the Tamil Tigers more than three years ago in a bloody showdown which has drawn accusations by the international community of war crimes.

According to the military, the students had been planning an "illegal" commemoration of the Tigers — a guerrilla movement notorious for its suicide attacks.

However, a military spokesman denied that soldiers had taken anything more than a support role in police action at the university on Tuesday evening when pro-Tiger posters and leaflets were confiscated.

In the aftermath of the raid, the students organised a protest on Wednesday at the university where soldiers stood alongside police.

"The army was asked to stand by to assist the police in crowd control," military spokesman Brigadier Ruwan Wanigasooriya told AFP.

"There were a very small crowd and no need for the army to deploy."

There have been international calls to demilitarise Jaffna, 400 kilometres (250 miles) north of Colombo, and ease restrictions on civilians.

Jaffna, the cultural capital of the island’s Tamil minority, was once run as a de-facto separate state by the Tigers.

Tigers had led a guerrilla war for an independent Tamil homeland since 1972 in a campaign that claimed more than 100,000 lives, according to UN estimates.

The military spokesman said Wednesday’s student agitation had been provoked by local politicians to disrupt what he called cordial ties between the security forces and the local residents.

"There is a political agenda to create unrest in Jaffna which had been very peaceful for years," Wanigasooriya said.

He denied security forces smashed windows of Saravanapavan’s vehicle and said the damage may have been caused by stones thrown by the students themselves.

Saravanapavan has alleged his car was damaged by troops or police while he was trying to stop the violence.

Local journalists said some of them were also roughed up during the protest and their cameras taken away, but later returned.

Witnesses said police baton-charged students and that plain-clothed troops were also involved in attacking them with sticks leaving at least 20 undergraduates injured.

Five men and two women were hospitalised and later discharged in the evening.