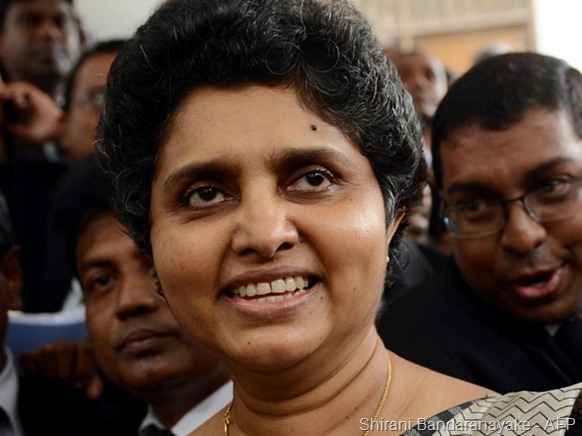 The move to impeach the country’s first female chief justice came after she scuttled several bills, including one that gave more powers to President Mahinda Rajapakse’s youngest brother Basil, the economic development minister.

"At various stages of the proceedings of the PSC (parliamentary select committee), two (ruling party) members hurled abuse such as ‘mad woman’ at the chief justice," her lawyers said in a statement a day after the hearing.

"It became evident that these members had been mandated to ridicule the head of the judiciary and the legal profession."

Bandaranayake and her team of lawyers walked out of the parliamentary select committee on Thursday evening after making a statement that she was not being given a fair hearing.

"She will not attend future hearings," a lawyer close to the case told AFP.

Her lawyers said their repeated requests for documents supporting the 14 allegations against Bandaranayake were not provided by her accusers and the ruling party dominated PSC refused to allow witnesses to be cross examined.

However, she was given over 1,000 pages of documents on Thursday evening and asked to respond in less than 24 hours, the lawyers said, adding that it was ‘obvious’ that the majority of the PSC had no intention of giving her a fair hearing.

There was no formal reaction from the government, but a ruling party law maker who declined to be named told AFP that they will proceed with the inquiry whether or not the 54-year-old chief justice attends the hearing on Friday afternoon.

The impeachment bid has led to a head-on collision between the judiciary and the legislature controlled by Rajapakse, who has consolidated his power after crushing Tamil Tiger rebels in a military offensive in May 2009.

Bandaranayake infuriated the government last month when she said it was illegal for lawmakers to investigate her, but vowed she would defend herself against impeachment charges of professional and financial misconduct.