Public statements made by UN officials during media stakeouts and briefings, Wikileaks exposures, and the testimony of twelve UN field staff reported earlier in TamilNet provide a blue-print to the strategy adopted by the UN to allow Sri Lanka to defeat the Tigers, and to ignore the mounting numbers of civilian casualties. This feature catalogues the statements from UN’s former humanitarian chief, John Holmes, as he attempts to provide diplomatic cover to the slaughter taking place in Mu’l’livaaykkaal, repeatedly relying on Colombo’s assurances on not using heavy weapons, and hesitating to provide casualty figures, a conduct comport with the "internal" strategy revealed by the then President of the United Nations Security Council, Yukio Takasu, that gave primacy to the need to eliminate the “terrorist LTTE …which had broken several ceasefire agreements."

While the recent Petrie report accused the UN of "massive and system wide failure to prevent the slaughter of an estimated 40,000 ethnic Tamils in five short months," Holmes defended UN’s actions and criticized the report saying the UN faced "some very difficult dilemmas" at the time and could be criticized for the decisions it had taken, adding, "[b]ut the idea that if we behaved differently, the Sri Lankan government would have behaved differently I think is not one that is easy to reconcile with the reality at the time." 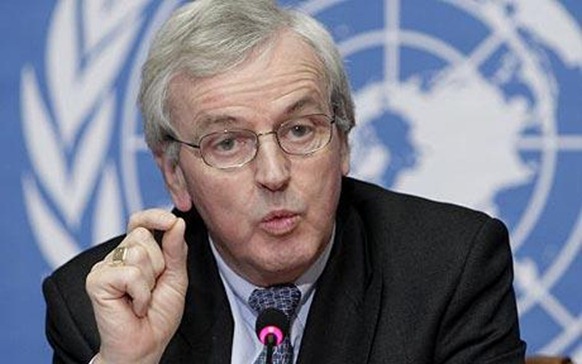 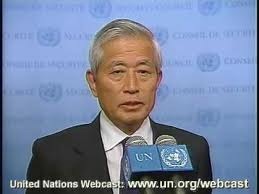 Takasu’s February 20, 2009 media stakeout after a Security Council discussions (Click here, @12:20) reflects the mindset of the key UN policy makers for Sri Lanka action. Takasu says, inter-alia, "humanitarian situation is part of a bigger picture which involves political and security situation…the situation is complicated…many ceasefires were held which were broken by the LTTE…Ceasefire is considered favorable to the terrorist [LTTE] group…They use the humanitarian opportunity to promote military offensive…you can’t just ask the Government [Sri Lanka] to stop…."

Viewed through this prism of alleged UN’s internal policy to facilitate military defeat of the LTTE even at high cost of civilian lives, Holmes subsequent statements reflect a clear motive behind the UN’s inaction during the five months following Takasu’s comment.

John Holmes appeared on five occasions to brief UN press during the last four months of the war, from February to May 2009. Innercity Press (ICP) and a few journalists have continued to raise troubling questions on civilian casualties and the inaction of the UN.

Holmes refuses to provide any estimate of the casualty figures even though ICP leaked a UN internal document in March-2009 of more than 2800 deaths due to shelling by Sri Lanka military.

In an attempt to highlight the evasive answers from Holmes on why UN has not been able to provide casualty figures, a French journalist in April 29th briefing 2009, questions Holmes on why the UN has not at least provided a “soft-figure” on civilian deaths so that international opinion could be mobilized UN-Holmes. Holmes declines to answer.

UN’s Petrie report on UN’s inaction during the last stages of the war, documents Holmes and Nambiar jointly pressuring Navi Pillay of UNHCR to desist from publishing estimated casualty figures that would put UN in to a “difficult terrain."

Regarding the number of civilians who remained in the LTTE controlled territory, the estimates provided by Holmes were 70k (by GoSL), 200k (by UN), and more than 300k (by Tamil sources). In Wikileaks (Colombo Cable Jan-09-2009) then-Ambassador Blake quotes 300k civilians trapped behind LTTE lines, and confirms the GoSL’s intention to use food as an incentive to extract people out of LTTE area.

In addition the UNITAR satellite based analysis of human concentration in the Mu’l’livaaykkaal area implied much larger civilian population than GoSL figures. Despite no concrete pressure was brought on GoSL by UN to help deliver commensurate quantity of food and medicine.

Several UNfield staff who resigned from UN in protest subsequently. Here the UN, under the leadership of Holmes (OCHA), was accused by UN’s own staffers as an ineffective spectator to widespread starvation and failed to pressure the Tamil population in the LTTE controlled area. The staffers also criticized UN conveys delivering cricket bats and chalk boards to the starving civilians.

Another sinister motive in down playing the population figure is related to the pending large scale massacre of the civilians in Mullivaikal.

In all press briefing Holmes provides benefit of doubt to the GoSL, and attributes responsibility to LTTE for keeping civilians against their will, commented a Tamil activist who reviewed the briefings by Holmes.

Noting that Tamil civilians who came out of the Mu’l’livaaykkaal area were brought to the “internment camps” but Tamil civilians who lived outside the “trapped” area were also rounded up by the military and brought to the camps, a journalist inquires about potential war-crime because of the ethnicity-based round up. John Holmes says he was not aware of any large scale round up as such, but then continues to justify why it is acceptable because the whole region was a conflict zone.

"When an institution, whose mandate is humanitarian work and which is trusted to protect civilians, exhibits reckless disregard to human life and deceptively facilitates political goals of a failing state like Sri Lanka which has a mono-ethnic military, then complicit officials need to be identified and reprimanded," a Tamil activist commented.

– Sri Lanka situation is not "just" a humanitarian issue, but involves politics and security

– LTTE is a terrorist organization that has broken several CeaseFire agreements

– LTTE is well organized, and uses CeaseFires to advance its military strategy

[0:25] Concerned of civilians not allowed to leave by the LTTE and of forced recruitment by the LTTE.

[0:45] Calling GoSL to avoid civilian casualty, not to use heavy weapons and respect international law.

[2:20] Question by ICP on OCHA figures on civilian deaths-2682. Holmes appears irritated at the question.

[0:25] Concerned of civilians not allowed to leave by the LTTE and of forced recruitment by the LTTE.

[0:45] Calling GoSL to avoid civilian casualty, not to use heavy weapons and respect international law.

[2:20] Question by ICP on OCHA figures on civilian deaths-2682. Holmes appears irritated at the question.

[5:10] Calling GoSL to live up to the promise of not using heavy weapons.

[7:50] Warns GoSL against final offensive that would cause blood bath on the beach.

[14:00] Journalist probe Holmes on evidence that people being kept against their will by the LTTE.

[21:50] UN has no access to initial screening points like Killinochchi. Gov. solders bring people to transit camp at Omanthai. But says UN has no evidence of disappearances.

[7:30] Following the armed conflict an equitable political solution for Tamils must be found so that the problem does not reoccur.

[9:00] A UN-French journalist quizzes Holmes on screening process and disappearances.

[21:00] UN Journalist raises the specter of setting a precedent in GoSL successfully denying access to journalist and NGOs to the conflict zone.

[24:40] UN-French journalist is puzzled why UN is not publishing “soft’ casualty figures so that international attention can be mobilized.

[17:40] Question from a journalist: People who were outside conflict zone were rounded up and brought to the camp. Is there accountability and war crime investigation under consideration? Holmes was not aware of any round up by military, but added that whole area was a conflict zone and and under LTTE control (i.e., rounding up Tamils outside the conflict zone is acceptable)

[23:00] UN is giving GoSL benefit of the doubt (to meet international law) to deal with people in camps .