Following the construction of Buddhist stupas with the deployment of ‘Army and Archaeology’ where there were no practising Buddhists at all, the genocidal Sri Lankan state occupying the country of Eezham Tamils is now bent upon creating a Buddhist population in the North by the conversions and simulations of a ‘Tamil Buddhist’ community and by the construction of Sinhala-Buddhist schools to attract and facilitate a colonising community from the South. Already achieving the demographic genocide in the East and in the Northwest over the last several decades, the idea of the Sinhala-Buddhist state now is to fully use the ‘once in a millennium opportunity’ provided by militarisation and ICE-abetment, to irrevocably complete the annihilation of the territoriality of the nation of Eezham Tamils, as envisaged by the LLRC blueprint. 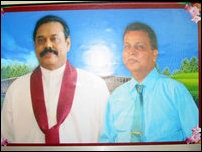 Colombo has now engaged a person, Mr. SL Ramachandran, a native of Vara’ni in Jaffna and Mr. Ravikumar a trader in Jaffna to organize a ‘Tamil-Buddhist’ community in Jaffna. They are fully backed by the occupying military and the Sinhala-Buddhist priests deployed in the North.

About Mr. Ramachandran, who displays photos of him taken with Mahinda Rajapaksa, there are claims that Colombo would be giving him an important political position in the North soon. He was one of Hathurusinghe’s ‘civil society’ member invited to discuss the Jaffna University situation with the Vice Chancellor and Deans of the university, at the Palaali base of the occupying military earlier this month. 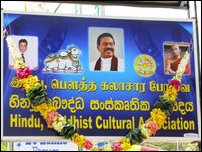 Last year he opened a ‘Hindu-Buddhist Cultural Association’ at Kantharmadam, a locality close to the Nalloor temple, university campus and the Indian consulate in Jaffna city. The commander of the occupying Sinhala military, Maj. Gen Hathurusinghe and some people associated with the Jaffna University as well, attended the event.

The organisation is now opening ‘Tamil-Buddhist’ schools in Jaffna. Sinhala is taught in these schools. The occupying military has helped in appropriating lands for the schools.

In the late 1970s and early 1980s Colombo was trying the Buddhist strategy in some pockets such as Vaathara-vaththai, Raja-kiraamam, Vallipurak-ku’richchi etc., where oppressed sections of Tamils were living. An entire school of converted students were made to write public exams in the Sinhala medium at Vaathara-vaththai in Puththoor in the early 1980s. The rise of Tamil militancy stopped such exploitations.

Colombo is now reviving the project in an enhanced and accelerated way in Jaffna and Vanni. 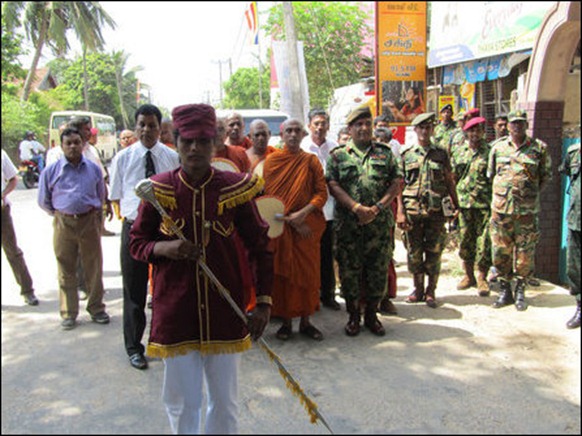 In Vanni, while hundreds of Tamil schools affected by the war are yet to be renovated and start functioning again, a major part of the money allotted for school constructions by Colombo goes to new Sinhala-Buddhist schools in the recently colonized villages, media reports in Jaffna said.

Out of the 400 million allotted for the construction or renovation of schools in the North in November, 193 million went to 29 Sinhala-Buddhist schools in the recent colonies, 115 million went to 12 Muslim schools, while only a single Tamil school selected has received 11 million and a Roman Catholic school has got 5 million, said Uthayan Daily, citing TNA parliamentarian Shivasakthi Ananthan.

The decision was taken at the orders of the colonial governor of Colombo in the North, Maj. Gen. Chandrasri.

Out of the 29 Sinhala schools, 22 are in Vavuniyaa district and 7 are in the Mullaiththeevu district.

One such Sinhala School that received 45 lakhs has only 3 students, Uthayan said.

TamilNet has also received documentary evidence from education department sources on the Sinhala-Buddhicisation of education in the North. 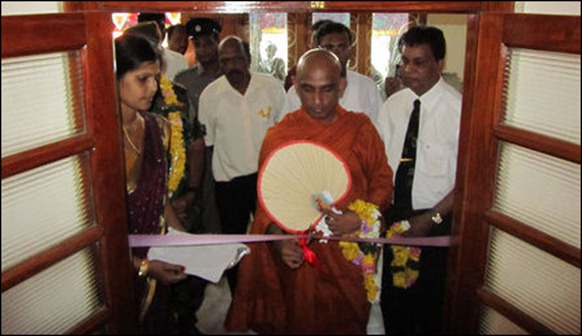 The whole project is to attract and facilitate Sinhala-Buddhist colonisation from the South, create a superiority aura for the Sinhala schools and lure even Tamil students to drop their language and to study in the Sinhala schools. All these strategies were earlier deployed in the East for the demographic genocide.

The latter two had been practised in the West and Northwest provinces over a century in Sinhalicising the Tamil coastal communities and in luring the Tamil-speaking Muslims to drop their language in the other southern provinces.

Sinhala tutories (tuition centres) are now mushrooming in Jaffna as the tutory culture is perceived as an effective tool in accelerating the Sinhalicisation process and in erasing memories.

A Sinhala-Buddhist monk from the South volunteering to teach Sinhala at Jaffna Hindu College has to be meekly received. But, whether a Tamil pundit will be accommodated with the same aura at Ananda College in Colombo is the question.

Permanent settlement of more than 80 per cent of the genocidal state’s military, an exclusive Sinhala military in the post-genocidal-war North; economic, political and administrative control vested with this military; colonisation from the south backed by this military; construction of Buddhist temples and Sinhala-Buddhist schools in a land where there are no practising Buddhists at all; oppression of Tamil students and abuse of Tamil women; status of native people as subjugated subordinates; efforts to erase memory from the younger generation and vilification of the diaspora to prevent it from coming to help — the genocidal agenda of the Sri Lankan state is too explicit.

The modus operandi is also too explicit to understand that without the recognition of the sovereignty of the affected nation and its right to self-determination, the genocide could never be stopped.

Only those who are in complicity with the genocide, and want to see the annihilation of Eezham Tamils as a nation of its own territory in the island, could have the audacity to ask the Tamils to prove the genocide.

The Colombo-centric state has nearly 500 years of experience in practising colonialism and agent-colonialism. Eezham Tamils who have never seen even the so-called independence from the European colonialism now face the full brunt of the ‘expertise’ of Colombo, inherited from the Portuguese, the Dutch and the English.

Even the Portuguese, the Dutch or the English, despite the destruction of temples and introduction of the Churches, never annihilated the nation of Eezham Tamils and its territoriality. But now, a full-fledged genocide is taking place for the first time in the entire history of Eezham Tamils in the island. 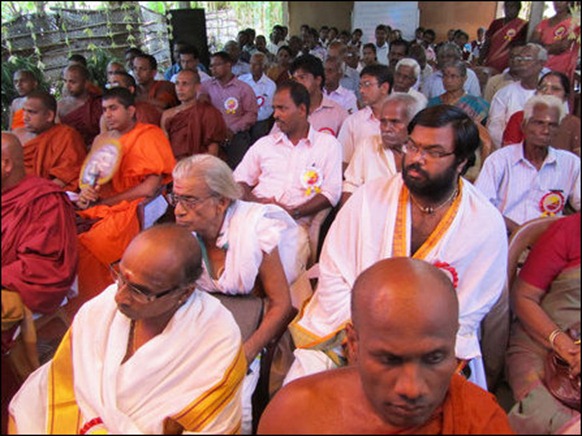 Historically Buddhism was not alien to Tamils or to Tamil language.

The Tamil language has the rare distinction among all the South Asian languages in serving as a medium for various religions and shades of philosophies that originated in South Asia as well as came from outside in the last 2,500 years. They range from primitive religions including the substratum of today’s Hinduism to Jainism, Buddhism, Brahmanical religions, Islam, Christianity, folk religions and even Atheism.

If the Tamils, including the Eezham Tamils, have dropped Buddhism at a historical stage, it was their choice.

In fact it was the lower echelons of the society, the hunters, cattle-herders, potters, washers and the so-called untouchables, who were the first among the Tamils to rise up through a Tamil devotional movement, against Buddhism and Jainism that was enjoying royal and mercantile patronage.

If Buddhism is a necessity today, Tamils may embrace it by conviction as we see with sections of Dalit in Tamil Nadu.

If temples and mosques of the Tamil-speaking people are found in the south of the island, they have come after non-violent settlement of the people following the faiths, and they don’t engage in changing religious or language identity of others.

But the Sinhala Buddhism first brings in the military, commits a genocidal war of indelible memory, builds temples and schools where there are no followers and then try to bring in a demographic change of genocidal intent in the country of Eezham Tamils.

Islam, known to Tamils from its very inception was largely peaceful in coming to them. Christianity, especially in Tamil Nadu, was largely people-friendly despite the colonialism and was immensely contributory to modern Tamil identity and culture.

But for the first time in the long history of Tamil civilization, the Sinhala-Buddhism of Sri Lankan State thinks of challenging the Tamil self-respect by imposing a religion and language through genocide.

The Saivism of the Tamil devotional strand, Islam or Christianity practised today by Eezham Tamils have their own memories embedded in the medium of Tamil language, and the basic of all religious memory is ultimately human self-respect.

“One who doesn’t have self-respect has no religion at all,” writes Tamil poet Bharathy citing from The Koran. 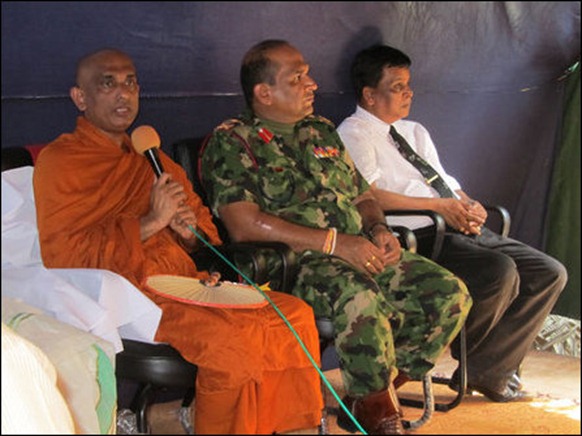 Sinhala-Buddhism wouldn’t have dared to embark on this genocidal mission, which is also suicidal for its own self-respect, had there not been abetment and complicity in the project from the outside, especially from the Establishments in India and the West.

From Romila Thapar, known for her inclination with the Congress regimes and who chose to preach on Buddhism at Colombo immediately after the genocidal war, to Shusma Swaraj’s BJP that chose to invite Mahinda Rajapaksa to inaugurate a Buddhist University, have indirectly or directly made appeasement with the Buddhism of the genocidal State.

News sources in Jaffna say that funds for the Buddhist activities of genocidal nature in Jaffna now come from certain European connections, especially from Switzerland.

The UN officials who were at the service of the powers and Establishments are only small fry in getting indicted for the genocide.

SL education office document calling for construction tenders of mostly Sinhala-Buddhist schools and some Muslim schools in the North. Note the Sinhalicisation of school names and place names in the recently Sinhalicised colonies of Vavuniyaa and Mullaiththeevu districts: