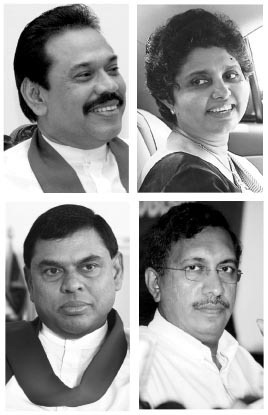 Stating that the Mahinda Rajapaksa government is caught in a Catch 22 situation on many recent issues would be an understatement.

The government is facing a predicament in dealing with several key issues that range from the impeachment of Chief Justice Dr. Shirani Bandaranayake, to the arrest of Jaffna University students under the Prevention of Terrorism Act (PTA) and the failure to provide relief to the flood affected people in many districts.

To further compound matters, senior government ministers have distanced themselves from the impeachment drama and have also refrained from making any statements defending the government’s moves.

The impeachment of the Chief Justice has reached an impasse where Dr. Bandaranayake has shown no inclination of budging an inch and the government unable to retreat.Unfortunately, vanity of the senior members of the Rajapaksa government has prevented the following of proposals forwarded by the likes of Opposition Leader Ranil Wickremesinghe and even the three leftist ministers in the UPFA government to overcome the current crisis situation in relation to the judiciary.

It was Nava Sama Samaja Party Leader Dr. Wickremabahu Karunaratne who rightfully pointed out that Wickremesinghe in fact had offered the President a path to retreat.

Wickremesinghe has proposed the appointment of an independent committee comprising three Commonwealth Judges to probe the impeachment charges against the Chief Justice.

President Rajapaksa instead has stated that he would appoint an independent committee to study and advice him on the findings of the parliamentary select committee (PSC) that probed the Chief Justice’s impeachment charges.

In the meantime, the Court of Appeal hearing a writ application filed by the Chief Justice against the PSC and its findings ordered the Speaker of parliament and members of the PSC to be present in court on January 3rd when the case is to be heard next.

It is in this backdrop that Leader of the Lanka Sama Samaja Party (LSSP), Senior Minister Prof. Tissa Vitharana, Leader of the Communist Party, Senior Minister D.E.W. Gunasekara and Leader of the Democratic Leftist Front, Minister Vasudeva Nanayakkara forwarded a request to the President to prorogue parliament, which is set to convene on January 8 after holidays, to allow time for both sides to re-evaluate the situation.

The three leftist ministers had proposed that the impeachment be discussed and if necessary re-submitted to the House after setting in place the legislation required for such a move.

However, several key figures in the Rajapaksa government have stood firm that there should not be any proroguing of parliament.

A senior minister said that the government had no option but to go ahead with the impeachment motion.

After deliberations between several senior members of the government, it was decided that the President would appoint an independent committee to study the PSC report and would continue with the impeachment process since attempts to broker a deal with the Chief Justice have thus far failed.

Nevertheless, the members have also decided the necessity to introduce a new law to provide a comprehensive procedure for future impeachments.

It is learnt that several governing party members had recently informed Economic Development Minister Basil Rajapaksa that many senior ministers have so far failed to speak a word defending the government’s move.

A few media personnel and a former head of a state media institution had also been present during the discussion. It was decided at the discussion that governing party members must be asked to speak in support of the impeachment motion and to take the message among their constituencies to minimize the growing dissention against the government in the matter.

As a result, a telephone call was made to the head of the now defunct PSC that probed the impeachment charges against the Chief Justice, Minister Anura Priyadharshana Yapa.

He was asked to participate in a programme on the impeachment motion in a state media.

It was then decided to hold a media briefing in Colombo, presided by Yapa on the 26th at the Sri Lanka Foundation Institute (SLFI).

Interestingly, former Foreign Minister Rohitha Bogollagama accompanied Yapa at the press conference on the 26th increasing speculation that he would be appointed to parliament from the National List.

Bogollagama was also present at a recent meeting President Rajapaksa had with the heads of media institutions and giving the impression of a close rapport between the Rajapaksas’ and himself.

However, Yapa defended the PSC report saying that it was appointed according to the Constitution and preceded in an unbiased manner.

Apart from Yapa, UNP defectors to the government like Minister Dr. Rajitha Senaratne and coalition partner, NFF Leader and Minister Wimal Weerawansa also accepted the task and made comments to the media in support of the impeachment motion and claiming there was no need to prorogue parliament.

The campaign activated by the government to muster support for the impeachment motion irked the Chief Justice’s lawyers.

They accused the government of carrying out baseless propaganda programmes against the Chief Justice.

Issuing a statement, the lawyer had accused the government of carrying out an organized series of baseless propaganda programs in state electronic media against the Chief Justice, the judiciary and leading lawyers. “It is abundantly clear that these are not isolated attacks but meticulously orchestrated attacks coerced and carried out at the behest of highest in authority,” the lawyers have said.

“These are clearly intended to pressure the Chief Justice to summarily resign, because the Government is well aware that the entire impeachment process is irregular and the Chief Justice cannot be lawfully removed from office,” the statement has further noted.

Apart from the impeachment saga, the government’s dwindling popularity in the face of the people was witnessed at the anger shown towards governing party members during their visits to the flood affected areas in the country.

The government’s failure to address the rising cost of living and the dire need of many of the flood affected families for some form of solid relief resulted in residents in several areas in the Puttalam District holding a protest.

The protesting families from areas like Mahawewa, Arachchikattuwa, Madampe, Chilaw and several others were angry that they had only received several cooked meals as relief.

They lamented that their children didn’t even have a proper change of clothes since they had been unable to carry bags and baggage when they fled their houses during the floods.

Deputy Minister Neomal Perera, a North Western Provincial Councilor and a government party member from the Arachchikattuwa Pradeshiya Sabha have visited the site of the protest.

They had asked the protestors to disperse when they had expressed their woes and refused to move away.

“We need solutions,” they have said.

Perera had left the site a few minutes later and the protestors have started to hoot at the rest of the government party politicians when they too had moved away realizing they would not be able to stop the protest.

The flood displaced in the Puttalam District have been angered that the government after failing to provide relief to them had promised relief through a private media institution.

The people have waited an entire day hoping for the relief promised by a governing party politician, but none had arrived.

Another group that has once again been affected is the farmers in the Polonnaruwa District.

Their woes also continue and they have expressed their displeasure to Minister Maithripala Sirisena over the non-receipt of any relief during floods or droughts.

Amidst the mounting issues faced by the Rajapaksa government, it seems like the governing party is looking at a morale boost by pushing through the controversial Divi Neguma Bill in parliament when it re-convenes in January.

Ministers Basil Rajapaksa and Champika Ranawaka have already made public statements that the bill would be passed in the House with a two-thirds majority.

Following the Supreme Court directive that certain clauses in the bill needed to be amended or referendum is to be held for approval apart from being passed with a two-thirds majority in parliament, the bill was withdrawn from the Order Book.

The bill is to now be re-entered to the Order Book on the 8th and it is to be passed with a two-thirds majority in parliament.

Passing the Divi Neguma Bill would be considered a victory by the Rajapaksa government, given that the Supreme Court verdict on the bill served as a catalyst in bringing an impeachment motion against the Chief Justice.

Be that as it may, the Rajapaksa government that is pre-occupied with local issues would have to start work at international level if it is to put its best foot forward at the next UN Human Rights Commission (UNHRC) sessions in Geneva in March 2013.

The US sponsored resolution that was adopted at the 19th session in March this year is up for review in March 2013.

US officials have so far maintained that although the government has shown signs of implementing the recommendations of the Lessons Learnt and Reconciliation Commission (LLRC), progress is slow.

The US and members of the international community have also expressed concerns over the current issues faced by the country’s judiciary. They have called for the protection of democracy and the safeguarding of judicial independence.

The government has nevertheless managed to add more issues to the list of questions it would have to face at the UNHRC – i.e. the alleged killing of prisoners during the riot at the Welikada Prison and the arrest and detention of Jaffna university students by the Terrorism Investigations Department (TID) under the Prevention of Terrorism Act (PTA).

However, the TNA says it would make submissions at the next UNHRC session.

TNA Spokesperson and parliamentarian Suresh Premachandran has told the media that the party would make its submissions based on the non-implementation of the LLRC recommendations and the issues faced by residents of the Northern Province.

He has explained that the party would make use of all resources available to it since political parties are not allowed to make submissions at the sessions.

He has noted that the plight of the Tamil people in the country needs to be highlighted at the UNHRC session.

According to Premachandran, the party would look at all avenues to make its representations to the UNHRC.

The Rajapaksa government would have to start building its links with its allies and make new friends in the UNHRC given that several key countries like Russia and China that backed Sri Lanka during the US sponsored resolution last March would not be sitting members of the Council in 2013.

Neighbouring India would play a significant role in this aspect and the importance of Indo-Sri Lanka relations would once again come to the limelight come March next year.

A former Major General of the Indian Army, Ashok K. Mehta has said that Tamil Nadu politics willy-nilly is once again on the verge of rocking India-Sri Lanka relations.

In an opinion written for the Economic Times, Mehta has noted that the military has legitimized President Mahinda Rajapaksa’s overwhelming majority rule both at the centre and in the provinces with the opposition reduced to a non-entity and kingmakers SLMC made irrelevant except in the Eastern province where it was wooed by the TNA and the ruling alliance to form the government.