Nava Sama Samaja Party Leader Dr Wickremabahu Karunratne says the government has only two options in resolving the current issue with the judiciary on the impeachment motion against the Chief Justice – to retreat or go forward on the confrontational mode. “The Constitution is superior. The Constitution is fundamental law,” he said. Dr Karunaratne observed that Sri Lanka has become a slave of world powers and addressing it is the first challenge.

Following are excerpts of the interview: 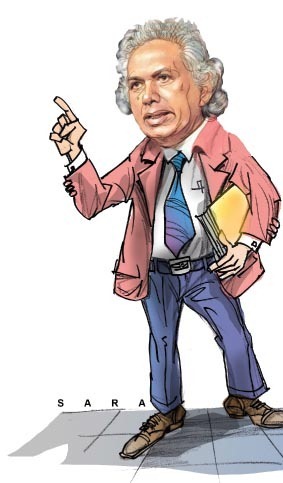 Q: What is your view on the current situation with regard to the impeachment motion against the Chief Justice?

A: It is now quite stale. Mahinda Rajapaksa himself has admitted that there’s something wrong and should be corrected. The attempt was to terrorize the law society into submission, but it did not seem to have worked. There are only two options, either to go forward with the terrorizing tactics and repression or to retreat. I think provided he has some intelligence, the option is to retreat. Otherwise, he will have to confront not only the judiciary, but also the entire professional society. They are all apprehensive whether they could carry out their work without any political interference. Each profession has its own ethics and own way of taking action against immoral acts, general councils and institutions to look into the sector.

The views of the senior professionals should have been explored before the impeachment was submitted or taking any judicial act through parliament. That is the normal way of handling issues. If that is not there, the Bourgeois society cannot exist. The market would otherwise be unable to operate. There would not be any business communications, agreements or alliances in such a scenario. Law is the language of the market. It is the precise way of dealing with each other. If the precise language is not operative, the market will go into crisis. Even business or anything else could not be achieved if the law is mishandled. You cannot work on trust alone. The government is inadvertently arresting the operations or the legal connections with each other, which will be disastrous. The only way out is a social revolution, which I would like. In a way, I indirectly like what Mahinda is doing. The stupider he is, merrier will be my path.

Q: Hearing a writ application filed by the Chief Justice, the Court of Appeal has asked the Speaker of parliament and members of the parliamentary select committee (PSC) to appear before court. How do you see this?

A: They are not warranted, but only issued notice. The court has informed them that a case about them is being heard and their work discussed. They have been informed that they could intervene or be represented in the debate. Even if they do not appear before court, the case would continue by proxy.

Q: In your view, who is superior under the current system?

A: The Constitution is superior. The Constitution is fundamental law. It is the law that is king. During the feudal society, it was the king that was law. But our society accepts law as the king. No one is above the law. The point is that if any government does not like the present Constitution, there’s a method to rectify it. You could change the Constitution by getting approval from a two-thirds majority in parliament and a referendum. It is a method of human consensus. If any one tries to go above the law, it is not only a violation of the law, but the violation of the fundamental existence of society. If law does not prevail, the result would be anarchy.

Q: How do you think the current clash between the three pillars of democracy could be resolved?

A: It is an unwarranted act of the executive to instruct to bring an impeachment. The options are to stop and retreat or try a camouflage. The Leader of the Opposition has proposed a camouflage. The proposal to appoint a committee of three Commonwealth judges is a way to back out. It is a path of retreat. Therefore, the choice is to retreat ceremoniously or disgracefully. I’m waiting for the disgrace.

Q: Do you think the government could successfully address the issues faced by the country?

A: No. It’s been an extremely poor performance. They managed to suppress the Tamil rebellion due to the support of world powers, who did so for their personal agendas. Although, some individuals believe they have brought an end to the struggle, it is the result of someone else’s work. I can’t see that the ruling party has done anything. In the eye of the super powers in the world, the government has tried to carry out their agendas. They come to the country, praise and grab more resources from the people while making more avenues for their investors to enter the country. We have become slaves of world capitalism.

Q: How best do you think these issues could be resolved?

A: Simple. Like many other countries, we need to sit and work out our own plan. We can start with a democratic and free policy to move out of the clutches of world powers. We need a very democratic Constitution. Implementing the recommendations of the LLRC could be a move towards it and be the beginning to bring together all communities. We need to mobilize all our resources. Unless we get the first step of a democratic Constitution with a lot of autonomy, we cannot move forward. Our society is a complex and old. However, we must see that all areas of society are covered and that everyone is happy.

Q: What challenges do you think the country has to overcome?

A: The first is the challenge from world powers including India, who have their own agendas. India says it is a friend, but has its own agenda. Global capitalism is modern and therefore we are dealing with a serious issue. Earlier we knew where the aggression came from, but now you don’t know where it will come from. We also need to be international in our approach. We can be secular, but very international. The second challenge is that we have to weed out communalist, racist, religious sectarians who are trying to claim the land for themselves. We must also have the greatest possible participation of people from the village level to provincial councils and parliament. The electoral system needs to be changed for that. The proportional representation (PR) system should be kept only at the top level and the preferential voting system should be eliminated.

Q: Given the current situation, what implications do you think the country would have to face before the international community?

A: I think all sectors of the international community will be desperate to see that a proper human rights system prevails in the country. And to also see that the Bourgeois society is satisfied with the preparations – not the implementation, but the preparation work. That I think is commonly felt.