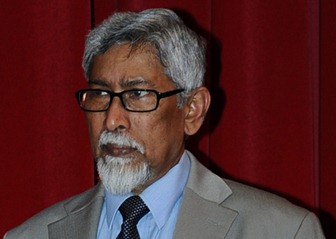 Rasaiah Navanayagam, a veteran Eezham Tamil activist based in the UK, passed away in London on Wednesday at the age of 71. Mr. Navanayagam, who rose in prominence as an activist in UK in the 80s, was instrumental in the formation of several grassroot political and social organizations in London. Recognized for being one of the key organizers of the first Maaveerar Naa’l in London in 1990 with the guidance of the late Col. Kittu, activists who worked with him remember his homeland oriented perspective and his resourcefulness in mobilizing the Tamil community in the UK for political and cultural activities. Mr. Navanayagam’s demise is mourned by a cross-section of the Eezham Tamil community in the UK.

"By being at the forefront of the formation of different organizations, he worked for the liberation struggle through different fronts. He realized long ago that a strong, enlightened people’s support is required for the sustenance and success of the struggle," a source close to Mr. Navanayagam told TamilNet.

Mr. Navanayagam, who was suffering from cancer for about a year, passed away in the late hours of 26 December.

He is survived by 2 sons and wife.

Born on 21 July 1941, Mr. Navanayagam came to the UK in 1966 as an Engineering student. Initially working as a Cost Analyst at a private firm, he later became entrenched in political activities as the crisis in the Tamil homeland worsened.

Emerging to prominence as a grassroots mobilizer for the Eezham Tamil cause after Black July remembrance in 1986, he started the Waltham Forest Tamil Sangam in East London borough, intended to function as a political and cultural organization to cater to the needs of the increasing numbers of Eezham Tamils in the UK.

Incidentally, on the 25th anniversary of the above organization held on 26 March 2011, Mr. Navanayagam was awarded the title of ‘Waltham Stow Thamizhar Thanthai’.

Assisting in the formation of the Tamil Rehabilitation Branch in London in 1985, he was in charge of the same from 1986-92.

He was also greatly instrumental in the formation of the Tamil Refugee Action Group (TRAG), an organization to assist Eezham Tamil refugees in the UK, in 1986. TRAG was set-up after his extensive interactions with and assistance from the African Refugee Action Group, sources close to him told TamilNet.

In 1989, he became an employee in TRAG as an Immigration Case Worker, while also assisting with the working programme of TRAG’s housing plan for Tamil refugees.

Mr. Navanayagam was also deeply involved in the activities of the Thamizhar Marumalarchchi Sangam since 1985.

He played a key role in organizing the first Tamil Heroes Day (Maaveeral Naa’l) in London in 1990 with the guidance of Col.Kittu.

Besides his keen interest in promoting cultural activities, he took political classes for activists, besides initiating workshops for community building and social empowerment of Tamils in the UK.

"He was very clear on the concept of the nation and sovereignty and he was also an adept in using Marxist theory to elaborate on the national question of Eezham Tamils. He was a committed Tamil nationalist at heart. Till his last days he remained committed to the objectives of the struggle," Mr. Guhan, a veteran activist and a political contemporary of Mr. Navanayagam, told TamilNet.