Dr Kasippillai Manoharan and four other families will be commemorating the seventh anniversary of the death of their sons extra-judicially executed by the Sri Lanka armed forces on the 2nd January 2006. The high school students, all then nearly 20-years old, were spending an afternoon at a seafront in Trincomalee when the dastardly crime, widely believed to be carried out under directives from high-level officials in Colombo, happened. While the case (DR-11/1-2006) in the Trincomalee court is kept alive for procedural reasons and the Court is unable to deliver justice due to the State’s alleged complicity in the killings, legal action against Sri Lanka’s President Rajapakse is proceeding in the District Columbia District Court. 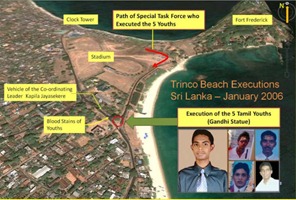 Speaking to TamilNet from his UK residence, Dr Manoharan said the period around Christmas and New Year is the most difficult time for him as these festivities have lost their meaning to him. "The only consolation to my family and me is the interest shown by the friends and a few organizations that keep the memories of my son alive by continuing to highlight that my sons killers are still free in Sri Lanka," Dr Manoharan said.

Dr Manoharan says in his affidavit submitted to the District Court of District of Columbia as part of the complaint to the case against Rajapakse, that he "personally believe[s] that these murders were carried out by the STF [Special Task Force] under the supervision of Superintendent of Police [SP] Kapila Jayasekara."

Oral arguments in the U.S. case is likely to be scheduled during January, legal sources in Washington said. The U.S. State Department has used in discretionary powers to support Rajapakse under Head of State Immunity who has been "charged" with committing war-crimes in the civil action.

In a classified memo written by US’s Sri Lanka Ambassador Robert Blake in October 2006 to Washington, ten months after the extra-judicial execution of five students, Basil Rajapakse, had told Ambassador Blake that Special Task Force (STF) was responsible for the killings, according a Wikileaks document.

The relevant text contained in the memo follows:

6. (C) Speaking with surprising candor, Rajapaksa explained the GSL’s efforts to prove that members of the Security Task Force (STF) murdered five students in Trincomalee in January: "We know the STF did it, but the bullet and gun evidence shows that they did not. They must have separate guns when they want to kill some one. We need forensic experts. We know who did it, but we can’t proceed in prosecuting them."

Ambassador Blake tells Washington that Rajapakse’s "candid response…laid the foundation for a pragmatic relationship with the [US] embassy."

Dr Manoharan, in March, rejected Colombo’s proposal in Geneva that Colombo would reopen investigations into the killing of the Trinco students, and the 17 aid workers at Muthoor saying that Colombo’s assurances are another ploy to buy time to sidestep incriminating the alleged killers, the Special Task Force (STF). Dr Manoharan added that, while there were serious flaws in the Commission of Inquiries that completed investigations of the Trinco students killing, Colombo, before attempting to mislead the world again, should first release the CoI report that might contain useful details into the identity of his son’s killers.

Amnesty International has been campaigning in Western capitals highlighting the impunity of the SriLanka military which was allegedly behind the killings of the students. In April 2012, Amnesty International human rights activists, including many high school students from the New England area, held a rally in front of Sri Lanka UN Mission, where the protesting students demanded Colombo to bring perpetrators of the crime to justice.