Sri Lanka’s Archbishop and a Cardinal of Vatican, His Eminence Malcolm Ranjith had personally come along with genocidal Colombo’s Defence Secretary and presidential sibling Gotabhaya Rajapaksa in grabbing Mu’l’lik-ku’lam village in Mannaar district for a naval base of the occupying Sinhala military and declaring the village out of bounds for its resettling inhabitants, news sources in Mannaar said. The Sinhala Archbishop had come and the Tamil Bishop of Mannaar, Rayappu Joseph, was made to silently sit along with him at the conference called by Gotabhaya at Mu’l’likku’lam on 26 December, in coercing the largely Tamil Catholic villagers to the sulking reconciliation of accepting alternative offers of land, the news sources further said. 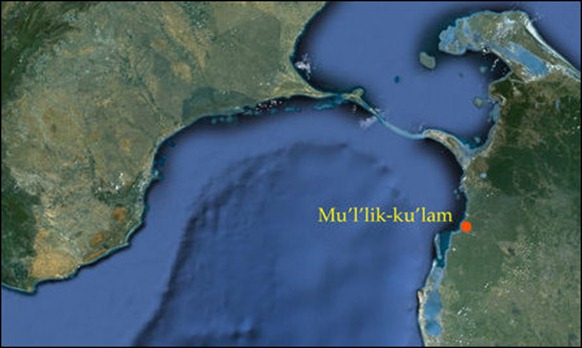 Gotabhaya and SL military officials amused, and the Bishop of Mannaar with fingertip on his lip, at the conference convened by Gotabhaya Rajapaksa for the land grab and militarisation of Mu’l’likku’lam. Seated in the centre and addressing the conference is Sri Lanka’s Archbishop and Vatican’s Cardinal, Malcolm Ranjith. [Photo courtesy: SL Defence Website]

The Tamil Catholic villagers, who were owning more than 1 acre of land per family as an average, are now given with half an acre per family 750 meters outside of the village and a ‘promise’ from Gotabhaya that a ‘state of the art’ village would be built for them having the Sinhala military of genocidal intent at their neighbourhood.

Many villagers became silent after seeing the Bishop of Mannaar at the conference, news sources said.

The Bishop of Mannaar later admitted to journalists, “there was nothing to take place through talks.” 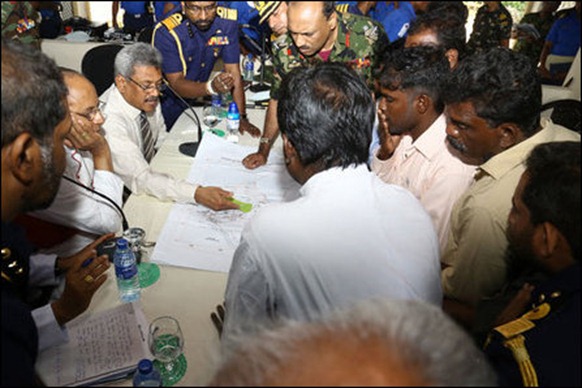 Gotabhaya explains his plans for ‘state of the art’ village adjacent to SL military base to the uprooted Tamil villagers [Photo courtesy: SL Defence website] 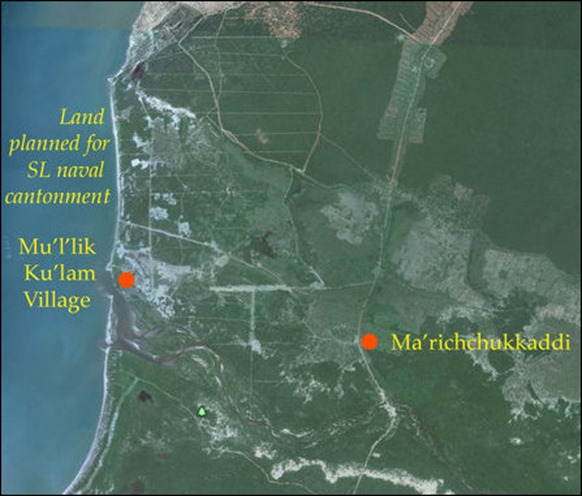 The Sinhalicized Tamil Catholics of Puththa’lam, Gampaha and Colombo districts now realize the dismemberment of their own territoriality in the island, their loss of language and loss of communication with their own clans on the opposite coast with whom they were sharing the waters throughout in history, the Catholic circles commented further. 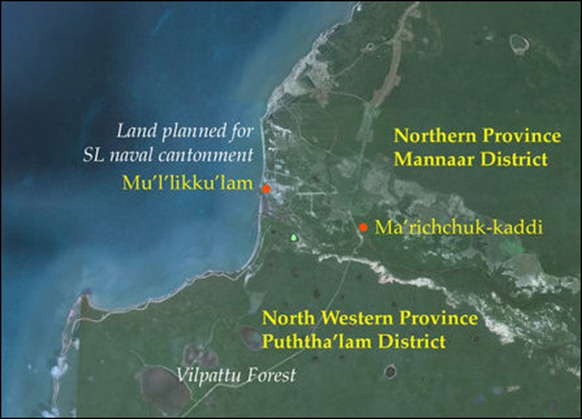 The river flowing and entering the Gulf of Mannaar at Mu’l’likku’lam is the boundary between the Northern and the North Western Provinces. The Vilpattu reserved forest south of the boundary was scattered with a number of Tamil villages before it was declared a reserved forest in 1903. The Tamil territory was contiguous up to Negombo in the Western Province at that time, before the Sinhalicisation of the Tamil Catholics of today’s Puththa’lam and Gampaha districts. [Map courtesy: Google Earth, Legend by TamilNet]

The Sinhala Archbishop Malcolm Ranjith has gone on record on several occasions for siding with the regime in Colombo and subtly shielding the regime’s genocide against Tamils.

It was the Bishop of Mannaar who boldly came forward to enlighten the world on the disappearances in the Vanni War running into a figure of 146,000.

The Bishop was also leading the civil society movement of Eezham Tamils in recent times.

“It concerns me greatly that the Criminal Investigation Department (CID) has just sent officers to question (intimidate) the outspoken Rt Rev Dr Rayappu Joseph, the Roman Catholic Bishop of Mannar in the Tamil North. The next step will be that he will ‘disappear’ in a white van – be ‘white vanned’. That is why the world must be informed, which is what I have been trying to do.

“The Pope will have to act. After all, it is one of his flock who is under (real) threat. Will he? I doubt it. I have a photograph of the Pope clasping the blood-stained hands of Mahinda Rajapaksa – clasping it not with one hand but with both!

“Vatican diplomacy has blessed many of the tyrants and torturers of recent history, betraying Catholic idealists in Singapore to Lee Kuan Yew, and secretly exerting pressure on the British government to free ‘Torturer-in-Chief’, former General Augusto Pinochet, who was arrested in Britain and was wanted by Spain to face charges of murder and torture. The Vatican’s unfitness for any role in world affairs could hardly have been better illustrated.

“So I am not holding my breath that the Vatican will act even though Bishop Rayappu Joseph may well be the Sri Lankan version of Archbishop Oscar Romero of El Salvador who was executed by government gunmen when he raised the Chalice celebrating Holy Communion.”