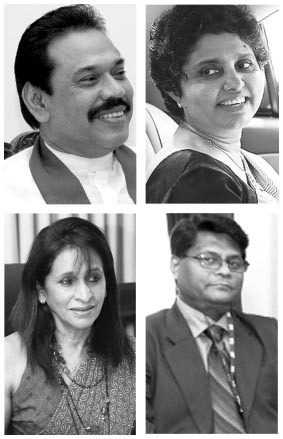 After initiating an impeachment against Chief Justice Dr Shirani Bandaranayake and proceeding with it ignoring court rulings, President Mahinda Rajapaksa is now faced with an unexpected crisis – finding a suitable replacement for Bandaranayake.

The government has decided that the next Chief Justice should be appointed from among the current judges in the Supreme Court without bringing a person from the outside.

The names that are now short-listed for the post of Chief Justice are Supreme Court Justices Shirani Thilekawardena and Sathya Hettige.

Rajapaksa however has decided to spend a lot of time pondering on the choices, adamant not to be faced with yet another situation with the next Chief Justice as with Bandaranayake.

Although Thilekawardena was considered to the post, several senior members of the government have advised the President to be mindful of the fact that regardless of her support to Bandaranayake’s impeachment, she was also a tough nut to crack.

Thilekawardena, the senior members have said, would be even harder to get rid of than Bandaranayake if such a situation arose.

Nevertheless, Rajapaksa understands that Thilekawardena would also be bold enough to accept the post at the current time and sit on the Chief Justice’s chair without any hesitance despite any opposition or protests.

It is also this reason that the Rajapaksas are now fretting.

The President has therefore laid his choice on Hettige, but is unsure if he would accept the post given the current situation with the judiciary where members of the legal fraternity including the Bar Association of Sri Lanka (BASL) has resolved not to accept the new Chief Justice who would be appointed in place of the incumbent Chief Justice in the event the latter is removed in an illegal manner.

Rajapaksa, it is learnt, prefers Hettige to take up the charge of the next Chief Justice.

The ball is now in the President’s court to decide how soon he wished to remove Bandaranayake after carrying out a speedy impeachment process.

The conundrum faced by the executive now is appointing the next Chief Justice within this week since the government at the outset announced that the impeachment proceedings had to be concluded within one month and finding a person who would not create more problems for the administration.

Be that as it may, Rajapaksa who has gone to great extents to proceed with the impeachment motion is not willing to take chances when announcing the name of the next Chief Justice.

He had told several senior government members that the announcement of the next Chief Justice has to be made cautiously because the executive would have egg on its face in the event the person whose name was proposed to the post refuses to accept it.

When initiating the impeachment proceedings against the Chief Justice, the government did not anticipate that a problem would be faced in finding the next Chief Justice.

However, the massive outcry in the judiciary and members of the public against the impeachment has made it difficult for Rajapaksa to announce the person who would replace Bandaranayake as the Chief Justice.

Several names were proposed to the post earlier. One was the name of former Attorney General Mohan Peiris. Some government members have pointed out that he was not the best choice for the post.

The President had then looked at former Attorney General C.R. de Silva, who had also refused the offer.

As rightly put by a senior lawyer, “no one would be willing to accept the post given the current situation.”

Until the executive resolves the problem Bandaranayake will continue as the Chief Justice albeit clearing some of her personal belongings from her official residence last week.

Nevertheless, the impeachment saga has also brought out in the open the clashes and divisions in the government.

The clash between the old SLFP guard and the Rajapaksa and Co. was evident during the impeachment process.

The governing UPFA is defiantly deterred by the move of several of its members to abstain from voting in favor of the impeachment motion and the report by the parliamentary select committee (PSC) that probed the charges.

The governing party for the first time experienced five of its members abstaining from voting with the government stance.

Friday evening also saw the governing party organizers and members of parliament being invited to Temple Trees for a dinner party for the New Year. Government MPs made their way to Temple Trees after voting for the impeachment motion.

Despite setbacks in the form of five governing party members abstaining from voting and the crisis in finding the next Chief Justice, everyone who gathered at Temple Trees were in a jovial mood.

The President chatted and mingled with everyone present at the function while son MP Namal Rajapaksa mingled with the young parliamentarians.

The organizers were given files of the report on the delimitation committee demarcating land areas.

President Rajapaksa had also addressed the organizers and MPs giving them a brief history lesson of the SLFP.

He had said that coups were nothing new to the SLFP and that the party had faced them at different times sometimes even resulting in the killing of senior party members.

“SLFP government has always faced coups from the times of the Bandaranaikes,” Rajapaksa had said.

However, he had said that the SLFP has always managed to emerge victorious from such coups.

According to Rajapaksa, the SLFP had won the coup launched by some local and international elements to destabilize the government using the impeachment against the judiciary.

Be that as it may, Rajapaksa and the government are likely to realize the implications of their actions come March when the conduct of the Sri Lankan government is to be taken up for review at the UN Human Rights Council (UNHRC) in Geneva.

The US has already expressed its concerns through its State Department Spokesperson and a release from the US embassy in Colombo over the impeachment of the Chief Justice and the clash between the legislature and judiciary.

The US on Thursday expressed serious concern over the impeachment proceedings against Sri Lanka’s first woman Chief Justice, saying the issue raised serious questions about the process and government pressure on the judiciary.

”As we said before, we had serious concerns about the actions that were taken to impeach the Chief Justice and the timing of the impeachment and that it raised serious questions about the process and government pressure on the judiciary,” State Department spokesperson Victoria Nuland told reporters.

Meanwhile, the US embassy issuing a statement on Friday stated that the US remains deeply concerned by the impeachment proceedings against Chief Justice Shirani Bandaranayake, which were conducted in defiance of a Supreme Court order.

“This impeachment calls into question issues about the separation of powers in Sri Lanka and the impact of its absence on democratic institutions,” the statement noted.

The Embassy has also expressed concern about accounts of violence during several of the protests.

The Embassy has called on all sides to respect the right of peaceful protest, and calls on the government to ensure that non-violent protesters are protected.

“The United States, along with our partners in the international community, continue to urge the Government of Sri Lanka to uphold the rule of law and respect the principles of democratic governance.”

Also, the British parliament, both the House of Commons and House of Lords had on Tuesday discussed the post war situation in Sri Lanka.

The Parliamentary Under-Secretary of State for Foreign and Commonwealth Affairs Alistair Burt speaking during the debate in the House of Commons had reportedly said that in two weeks’ time he would make his second visit to Sri Lanka.

The Colombo Gazette has quoted Burt as saying that Britain is committed to and support the concept of responsibility to protect, which was supported by all UN member states in 2005.

“Addressing events during the final days of the conflict is important and the UK has consistently called for an independent investigation into allegations of violation of international humanitarian law on both sides. There needs to be a more fundamental approach that goes beyond accountability. Colleagues have mentioned this in terms of the context of the future of Sri Lanka being for Sri Lankans themselves and how they take this forward. Therefore, we support the view, widely held in Sri Lanka and outside, that long-term peace can best be achieved through an inclusive political settlement that addresses the underlying causes of the conflict. Such a settlement must also take into account the legitimate grievances and aspirations of all Sri Lanka’s communities,” he had said.

On the progress that has been made he had said that the Sri Lankan Government recognized that in appointing the LLRC, which submitted its report in December 2011 and made more than 200 recommendations, including calls for credible investigations of alleged judicial killings and disappearances, demilitarization of the north, implementation of impartial land-dispute resolution mechanisms and protection of freedom of expression.

He had meanwhile noted it is too soon to talk about the British government’s attendance plans for the Commonwealth Heads of Government meeting.

To reopen that decision would require a consensus of all member states and I do not think that is likely. A decision on the location of CHOGM is not for the UK; it is for the Commonwealth. The meeting will discuss many issues, not just Sri Lanka, but as Sri Lanka well knows it will inevitably shine a spotlight on the host country, demonstrating either its progress or lack of it. It is up to Sri Lanka to choose what will be seen. As the Foreign Secretary has said, we expect the Sri Lankan Government to demonstrate that they uphold the values of the Commonwealth,” he had said.