A former LTTE member, known as Premraj Vasanthan, allegedly recruited by the SL military intelligence for covert operations in the post-Mu’l’livaaykkal times, had visited the office of the Tamil National Alliance (TNA) MP Mr Sivagnanam Sritharan after a long time last Friday and was wandering around inside the office. On the following day, the SL “Terrorist” Investigation Department (TID) operatives raided the office of the TNA parliamentarian in Ki’linochchi, with Mr Vasanthan in their ‘custody’. The intelligence operative “located” explosives, while the SL military “discovered” pornography material and the EPDP journalist planted condoms in an apparent move to discredit and frame Mr Sritharan, who has been gaining public support from the people of Vanni. 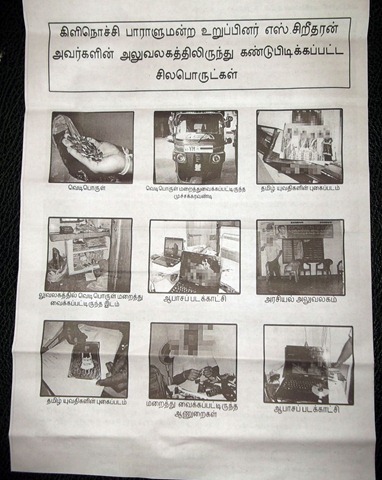 In the meantime, TNA sources in Vanni told TamilNet that they had spotted Mr. Vasanthan freely roaming around in Ki’linochchi market area after the episode at the TNA office in Ki’linochchi.

When the SL-TID operatives brought Vasanthan to Sritharan’s office last Saturday, he was in a handcuffed state.

The TID, deploying a ‘counterinsurgency’ (COIN) styled operation, also used a journalist, who has been hired by the EPDP parliamentarian Mr Chandrakumar as his propaganda manager. 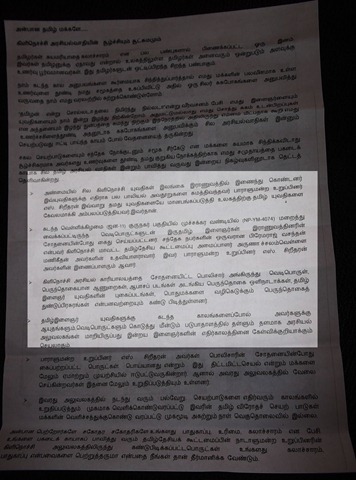 The SL military intelligence has designed and distributed psyop leaflets among the people.

However, the leaflets exposed the intention behind the SL action against the TNA parliamentarian.

The leaflets blamed TNA MP Sritharan for having voiced against alleged sexual harassments of Tamil women conscripted by the SL military recently.

In the meantime, around 30 to 40 SL soldiers were deployed in a search operation to locate Mr Pon Kanthan, who was at the office of Sritharan MP.

Mr Veazhamaalikithan, who was in charge of the office, is being detained at the Vavuniyaa office of the TID and is being interrogated.

Kanthan was earlier released after a brief interrogation at the office of the TNA MP last Saturday.

With the ‘bomb’ episode at Sritharan MP’s office in Ki’linochchi, the occupying SL military has sought to curb the political activities that were being carried out by the two activists who are close to the TNA MP.

On Friday, while commenting to the questions raised, Mr CVK Sivagnanam, a veteran civil and political activist, who is also a joint secretary of Ilangkai Thamizh Arasuk Kadchi (ITAK) said that a legal initiative is under way to protect Mr Sritharan.

Earlier, Mr Sritharan was telling media that he had been sidelined by the TNA hierarchy.

TNA leaders R Sampanthan and Maavai Senathirajah are yet to raise their voice in support of Mr Sritharan, who is being harassed by the “Terrorist” investigation department of Colombo.

There is a pattern in the modus operandi on who is protected and who is framed, political observers in the island said.

The US-based former GTF President appreciating the political line of Mr Sumanthiran MP has been given with an appointment letter to become the advisor to the Sinhala colonial governor in the North. But, Sritharan MP is framed by the TID.

The pattern makes many a Tamils to suspect that every act of Colombo, particularly the acts of Gotabhaya Rajapaksa, are actually designed and consented by an articulating ‘group’ from the outside engaged in engineering a particular agenda, and that is why Colombo confidently carries out all its operations, the observers further said.