Grassroots activists belonging to indigenous peoples of Americas, the Eezham Tamil diaspora in the UK and other solidarity groups discussed the different forms of oppression and genocide that their respective communities faced and the corresponding forms of resistance at an event in London on Monday, jointly organized by indigenous activists from the Americas based in the UK. In an exclusive interview to TamilNet, Sylvia McAdam Saysewahum, one of the co-founders of the popular “Idle No More” movement of indigenous people in Canada, spoke about the goals and strategies of the movement, question of identity and sovereignty, Canada’s multicultural policies, besides providing suggestions to the Eezham Tamils to preserve their traditions as a means to resistance. 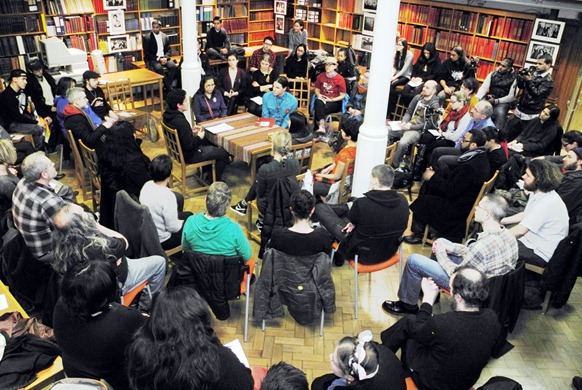 Teach-in session in London by Sylvia McAdam Saysewahum, the Co-founder of the popular “Idle No More” movement from Canada

The event at Bishopgate Library, on Liverpool Street, London began with a poem about the genocide, identity and resistance of the indigenous people, read out by Joanie Yayra Colque, an activist with the Tawantinsuyu Nation.

The discussions were moderated by Amaru Yupanqui from the same organization. 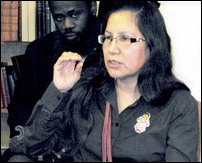 Speaking at the event, Sylvia McAdam informed the audience about the protracted genocide of the indigenous people of Canada referred to as “First Nations”. Elaborating how Canada’s Omnibus Bill C-45 would culturally and ecologically affect the people belonging to the First Nations, she said the protection of land and water was necessary for the life and culture of the indigenous people.

Narrating how “Idle No More” developed from a conversation between four women to mass movement, Ms. McAdam also noted the means through which the Canadian state used the media to black out or spread disinformation about their movement.

However, the First Nation’s activist explained how their movement used social media to effectively spread information about their goals and the utilization of “teach in” sessions as a strategy to politicize people.

Drawing parallels with Ms. McAdam’s presentation, grassroots Eezham Tamil activist Gobi Sivanthan referred to the International Community of Establishment’s systematic cover up and abetment of the genocide of the Eezham Tamils, criticizing the British government for its laying the foundation for the genocide through its creation of the Sinhala dominated unitary state.

Explaining how the fighters of the LTTE never surrendered despite an internationally coordinated genocidal war, Mr. Sivanthan opined that a sovereign Tamil Eelam was essential to the survival of the Eezham Tamil nation.

Likewise, he also laid criticism on the upcoming UN resolution in March, which he said would be watered down jointly by US and India to give Sri Lanka more time to complete the structural and cultural genocide of the Eezham Tamils. 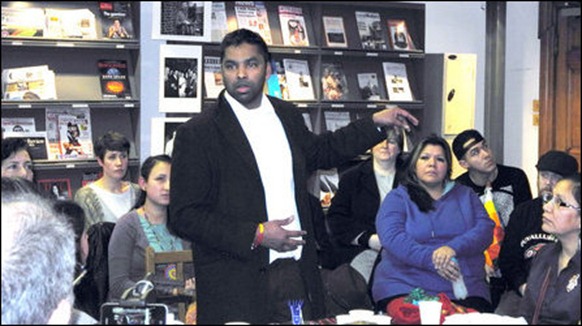 Luwezi Leinshasa from the Uhuru movement spoke about how the unjust global economic order was creating crisis and repressive regimes across the world.

Activists representing indigenous peoples of South America and Central America also spoke on the repression that their respective communities faced under colonialism and genocide.

Many of the discussants and participants were greatly interested in the success of Idle No More in grassroots mobilization through simple and effective tactics.

The tactics of this movement pose an effective initial resistance to Bill C-45, prescribing a political solution: recognizing First Nations sovereignty, and restoring the nation-to-nation relationship between First Nations and the British Crown now represented by the Canadian state, activists note.

From the 1600s to the mid-1800s, as waves of settlers arrived from overcrowded Europe, both the British and French Crowns signed "treaties" with individual First Nations, establishing a nation-to-nation legal relationship between them. After Quebec, then known as "New France", was annexed to Canada then called “British North America”, colonial relationships with First Nations were conducted solely by the British Crown.

After Canada became a country in 1867, other nations signed treaties directly with the Canadian government. There also remain First Nations with no treaty agreement today.

Canada’s mandatory residential school system removed First Nations children from their families, forbade them to speak their own languages and forced them to speak English. This system popularly referred to by indigenous activists as "killing the Indian in the child," was considered a form of cultural genocide. Sexual abuse and even the murder of children were rampant at residential schools.

While the system fell out of favor in the 1960’s, the last residential school was closed in 1996. To this day, conditions on reserves routinely garner condemnation by the United Nations, with lack of clean drinking water being a common complaint.

Idle No More organizers identify Bill C-45 as a direct challenge to the sovereignty of the First nations, and a legal tool to expedite structural genocide.

Speaking to TamilNet, Wes Elliot, grassroots activist of the Haudenosaunee Nation, described the state-approved governance structure, the Assembly of First Nations (AFN), as “a byproduct of Indian Act obedience.” Although such leaders are chosen through election, he explains, only four percent of eligible voters participate. Low turnout is partly because traditional structures, independent of Canadian government control, are being reinvigorated.

In challenging Bill C-45, First Nations are rediscovering the power of traditional social structures against those of a colonial state. "Idle No More" grassroots mobilization has placed the political demands of Indigenous peoples, including First Nations, Inuit, and Metis communities, at the forefront of Canadian political discourse.

“We are making alliances. We are not just a Native movement anymore. The government, the RCMP [the federal police], CSIS [Canadian intelligence service], they are the ones who don’t want to be caught ‘idle no more,’” Elliot declared. 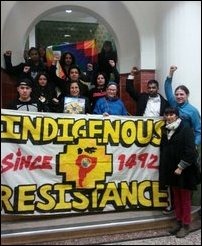 Distinct from a previous and largely unsuccessful strategy of lobbying favored by established leadership structures such as the AFN, this grassroots mobilization strategy succeeded in forcing both Prime Minister Stephen Harper and Governor-General David Johnston to hold meetings with Indigenous leaders in spite of initial refusals from both.

The iconic figure of the ‘Idle No More’ movement, elected Chief of Attawapiskat First Nation, Theresa Spence, began her hunger strike on the December 10 ‘National Day of Action’ called for by lead organizers. Her demand for a meeting with the Prime Minister on a nation-to-nation basis, to discuss the ongoing violations of historic treaties by the Canadian state, gained its force from grassroots pressure.

In response to the pressure generated by her protest, Stephen Harper, Canadian Prime Minister, was forced to meet a delegation from the Assembly of First Nations on January 11. This meeting was not a demand of the AFN.

Also on January 11, David Johnston, the Governor-General of Canada who represents the British Queen, opened a meeting with First Nations leaders by stating, “Let me begin by acknowledging that this gathering is taking place on the traditional territory of the Algonquin Nation, which spans the provinces of Ontario and Quebec.”